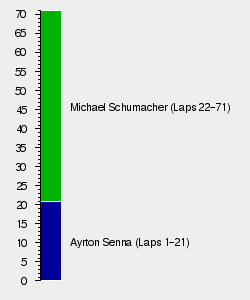 The XXIII Grande Prêmio do Brasil, otherwise known as the 1994 Brazilian Grand Prix, was the opening round of the 1994 FIA Formula One World Championship, staged at the Autódromo José Carlos Pace in São Paulo, Brazil, on the 27 March 1993.[1] The race would see Michael Schumacher sweep to victory, amid suspicions that his Benetton-Ford Cosworth was using electronic aids akin to those that had been banned at the end of the 1993 season.[1]

Indeed, the FIA had ruled that systems such as launch control, traction control and automatic gearboxes were working as driver aids during 1993, and hence had outlawed their use for the 1994 season.[1] In their place, the FIA allowed greater aerodynamic freedom, as well as enforced the re-introduction of refuelling during a Grand Prix.[1]

A busy winter had seen Ayrton Senna move to Williams-Renault as the most high-profile switch, taking over the seat previously occupied by 1993 World Champion Alain Prost.[1] The Frenchman himself had opted to retire having won his fourth Championship crown, although he would test for Senna's former employers McLaren, whom had signed a deal to use Peugeot engines for the campaign.[1]

It had also been a miserable winter for some of F1's biggest historic teams, with Lotus and Tyrrell in serious financial strife.[1] They would, however, manage to start the season, as would two new teams: Simtek and Pacific.[1]

Qualifying for the opening round would see Senna claim the first pole position of his Williams career, while Schumacher secured second.[1] Jean Alesi was next for Ferrari, while Damon Hill put the second Williams, running with #0 as its race number once again, into fourth.[1]

Senna duly sprinted into an early lead at the start of the race, while Alesi got the jump on Schumacher to claim second.[1] Hill gave chase in fourth, with the rest of the field making it through the first corner, and lap, without issue.[1]

Senna quickly eased clear at the head of the field, while Schumacher was able to barge his way past Alesi early on to lead the chase.[1] He duly went on to latch onto the back of Senna as the first pitstops approached, while Alesi had just enough pace to keep Hill at bay, the Brit struggling with a handling issue.[1]

Senna and Schumacher stopped on lap 21, with a stunningly quick swap for the latter gifting him the lead.[1] He subsequently pulled clear of the Williams over the following laps, before a huge accident threatened to stop the race.[1]

That accident involved Martin Brundle, Eddie Irvine and Jos Verstappen, who were fighting hard for seventh when they came across a lapped Éric Bernard.[1] At the same time Brundle had an engine failure, prompting Bernard to lift and Irvine to jink left, straight into the path of Verstappen.[1] That launched the #6 Benetton to fly over the back of Irvine's Jordan-Hart, before somersaulting its way over Brundle's McLaren, grazing the Brit's head.[1]

Miraculously all four drivers escaped unscathed, although the organisers opted to hand Irvine a one-race ban for causing a collision.[1] On track, meanwhile, there would be little change to the order, until Senna spun himself out of the race in a desperate bid to catch Schumacher after the second stops.[1]

With that the race was run, with Schumacher cruising home a full lap ahead of second placed Hill.[1] Alesi was next to claim just the fifth podium for Ferrari since the start of the 1992 season, while Rubens Barrichello, Ukyo Katayama and Karl Wendlinger claimed the remaining points.[1]

The full entry list for the 1994 Brazilian Grand Prix is outlined below:

Schumacher's Benetton ended qualifying second fastest to Senna's Williams.[3] Schumacher had been described as putting up a "fight" with Senna through every session, however in the end, the national hero remained fastest on his home circuit.[3] Although Senna had taken pole he was notably unhappy about the electronic aids being banned from the car.[3]

A concerned Senna mentioned after the session, "A year ago with the electronic suspension, the cars were riding the bumps a bit better. Now with the normal suspension it is very difficult for setting up the cars and getting the cars to ride smooth over the bumps."[3]

Despite his reservations and troubles, Senna had been the fastest car in every session of practice and qualifying that weekend.[3] His teammate, Damon Hill, could only manage fourth on the grid.[3]

Senna's old team at McLaren appeared to be struggling.[3] The cars suffering from throttle problems meant that Häkkinen could only manage eighth whilst Brundle was stuck down in eighteenth position.[3]

Ferrari were also having technical troubles with Berger stranded for much of the session to which he only managed seventeenth.[3] Alesi, complaining of heavy understeer managed to put his car in third position, albeit he was still a full second slower than Senna and Schumacher.[3]

The field is very closely matched, following Alesi, only a single second differs the cars down to Comas's Larrousse in thirteenth position.[3] The new rules had succeeded in closing up the competition.[3]

The full qualifying results for the 1994 Brazilian Grand Prix are outlined below:

The legions of Senna fans turned out in full force to which ahead of the race they, as they did every year, would perform their Senna chant.[3] Regarding the Brazilian crowd it was noted "Only one thing dominates their thoughts. The prospects of another Senna victory."[3]

Senna maintained his lead into the S do Senna, whilst behind Alesi got the better start than Schumacher, moving into second at the first corner.[3] Behind them, Häkkinen had also made advancements to which he had climbed two places into sixth position.[3]

He had made a poor start, however it was quickly evident that Schumacher was quicker than Alesi.[3] However Alesi defended well to which holding the Benetton up had meant that Senna had began to extend his lead at the front of the field.[3]

On the second lap, Schumacher attacked Alesi into Junção to which he took the position after what was described as "a number of unsuccessful attempts."[3] He thereafter gave chase to Senna whom had extended his lead to over four seconds.[3]

On lap 15, Brundle's McLaren becomes the first driver to make a pit-stop.[3] Brundle completed his stop in 10.3 seconds to which thereafter the rest of the field began preparing for their own stops.[3]

The Benetton pit crew complete a faster stop to which Schumacher is put into the lead with Senna exiting in second position.[3]

On lap thirty four, Irvine and Verstappen were battling for position.[3] Heading down the Reta Oposta, the two were side by side down the straight.[3] As they neared the end of the straight, they encountered the slow backmarker of Bernard.[3]

Verstappen had the clear air whilst Irvine was rapidly approaching the slower Ligier.[3] Irvine proved unwilling to concede the position and attempted to move around Bernard's car down the straight.[3] However in taking evasive action to avoid Bernard, Irvine pushed Verstappen whom was along side him onto the grass.[3]

Verstappen at top speed lost control of his Benetton and spun his car back into the path of Irvine whom was in the process of overtaking Bernard.[3] With Bernard and Irvine line abreast heading into turn four, Verstappen's out of control Benetton crashed into the pair of them.[3]

Brundle whom had previously lapped Bernard was taken unawares when the trio of cars behind him collided.[3] Verstappen having crashed into and flipped over the top of Irvine and Bernard also came smashing into Brundle.[3] All four cars were eliminated from the race.[3]

The leading duo of Schumacher and Senna had meanwhile made their second pit-stop.[3] Schumacher, however had been extending his advantage at the front of the field.[3] Senna seemingly had no answer to the Benetton's pace and had fallen back to nine second behind Schumacher.[3]

With fifteen laps to go, whilst struggling to find pace to match Schumacher, Senna "pushed a little too hard" and spun his car at Junção.[3] The Williams engine stalled and without able to get it running once again, Senna became an instant retirement.[3]

With his main rival out of the race, Schumacher thereafter went on to take an unchallenged victory in the race.[3] Hill had made it into second position whilst Alesi was demoted down to third.[3]

The full results for the 1994 Brazilian Grand Prix are outlined below:

The accident involving Jos Verstappen, Eddie Irvine, Éric Bernard and Martin Brundle at Interlagos was a major and shocking crash to which the drivers' all escaped the crash without serious injury.[3] Nonetheless, due to the severity of the accident, the stewards deemed it worthy of being investigated.[3]

Irvine whom had refused to back off from a fight with Verstappen when encountering Bernard's Larrousse down the straight had forced Verstappen off the circuit in a bid to overtake Bernard.[3] In doing so, Verstappen, spinning out of control then careered back into the path of Irvine, Bernard and Brundle to which he took them all out of the race.[3]

For these reasons, Irvine was deemed responsible for the crash and was given a one race ban and a $10 000 fine.[3] The Jordan team did not accept the news that their driver had been suspended and served notice of their intention to appeal the decision.[3]

Michael Schumacher would leave the opening race of the season at the head of the Championship hunt, holding a four point lead over Damon Hill. Jean Alesi was next up in third ahead of Rubens Barrichello, while Ukyo Katayama and Karl Wendlinger were the other early scorers.

Unsurprisingly it was an identical picture in the Constructors Championship, with the race winning Benetton-Ford Cosworth squad leading the way. They left Brazil with a four point lead over Williams-Renault, while Ferrari sat in third on four points. Behind, Jordan-Hart, Tyrrell-Yamaha and Sauber-Mercedes were all on the board, meaning six of F1's nine engine suppliers had registered a points finish at the season opener.