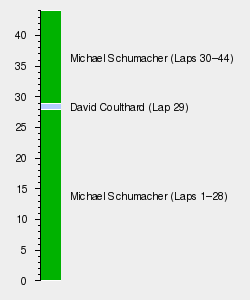 The 1994 Belgian Grand Prix, otherwise known as the LII Grand Prix de Belgique, was the eleventh round of the 1994 FIA Formula One World Championship, staged at the Circuit de Spa-Francorchamps in Spa, Belgium, on the 28 August 1994.[1] The race would see Michael Schumacher finish the race in first place, only to be disqualified for failing post-race scrutineering due to excessive wear on his "wooden plank".[1]

The weekend had started with Lotus in serious trouble, with rumours of the team on the verge of administration rife in the paddock.[1] They duly hired pay-driver Philippe Adams in place of Alex Zanardi, while Larrousse-Ford Cosworth dropped their pay-driver Olivier Beretta after he ran out of money.[1]

Qualifying would provide a shock, with Rubens Barrichello claiming his and Jordan-Hart's maiden pole position after almost two days of rain.[1] Schumacher was best of the rest for Benetton-Ford Cosworth ahead of damon Hill, while Eddie Irvine put the second Jordan-Hart into fourth.[1]

Yet, raceday proved to be dry, resulting in Jordan-Hart's hopes of a maiden victory evaporating at the start.[1] Indeed, while Barrichello would get a good enough start to maintain the lead off the grid, he would be powerless to prevent Schumacher dancing past as the exited Eau Rouge.[1]

A fast starting Jean Alesi would also sweep past the Jordan-Hart, having blasted between Hill and Irvine at the start.[1] However, the Frenchman's race was soon over with an engine failure, leaving Hill in second to lead the anti-Shumacher hunt once he dived past Barrichello at the Bus-stop.[1]

Schumacher and Hill quickly pulled clear at the front of the field, with the German ace managing to establish a fair lead over the Brit before they made their stops.[1] Behind, Barrichello would steadily slip down the field, forfeiting third to David Coulthard and fourth to Mika Häkkinen, while Heinz-Harald Frentzen spun out of the race when he came to pass the Jordan.[1]

The order remained largely unchanged through to the closing stages, with Schumacher able to survive a late spin and still retain the lead.[1] He duly flashed across the line to claim victory ahead of Hill, with Coulthard slipping behind Häkkinen and Jos Verstappen in the closing stages after Barrichello spun out of the race at half-distance.[1]

However, after the race all of the cars went through post-race scrutineering, which tested cars to check that they met the regulations.[1] It was at this point that the officials found that Schumacher's car had been running below the minimum ride-height allowed, with the wooden board mounted underneath the floor of the car showing excessive wear.[1] Benetton and Schumacher protested, claiming that the damage had been done by running over kerbs, but the German was ultimately disqualified.[1]

Hill duly inherited victory ahead of Häkkinen, while Verstappen, in the sister car, moved up to complete the podium.[1] That meant that Hill had managed to chip into Schumacher's Championship lead, although the Brit was running out of time to overhaul the German's 21 point lead.[1]

Michael Schumacher had extended his Championship lead for the first time since the 1994 French Grand Prix, leaving Hungary with 76 points to his name. That meant that closest challenger Damon Hill would be 31 points behind with six races to go, meaning the Brit would have to win half of the remaining races, with Schumacher failing to score, just to get back on terms. Gerhard Berger, meanwhile, was on the verge of falling out of the fight mathematically, being 49 points behind with 60 points left to fight for.

In the Constructors Championship it had been a similar story, with Benetton-Ford Cosworth finally able to extend their lead after a run of losses during the previous few rounds. They left Hungary with 29 points in hand over their closest challengers Ferrari, with the Scuderia having failed to score. That meant that Williams-Renault had closed in in their fight for second, leaving the Hungaroring just three behind, while McLaren-Peugeot had eased away from Jordan-Hart in fourth.

The full entry list for the 1994 Belgian Grand Prix is outlined below:

The full qualifying results for the 1994 Belgian Grand Prix are outlined below:

The full results for the 1994 Belgian Grand Prix are outlined below:

An inherited victory for Damon Hill ensured that the gap at the head of the Championship hunt came down, although the Brit was still some 21 points off the leader. Indeed, Michael Schumacher was still the overwhelming favourite to claim the title with five races to go, although with rumours of a ban growing louder, the German's lead was still vulnerable to attack. Elsewhere, Gerhard Berger was still hanging on in the title hunt, although the Austrian racer would have to win all five of the remaining races, and see Schumacher fail to score.

In the Constructors Championship, meanwhile, it had been a relatively neutral day for the Championship leaders Benetton-Ford Cosworth, although their lead had been reduced. Indeed, Williams-Renault had leapt ahead of Ferrari to claim second, and cut the gap to the leaders to 23 points, largely due to Schumacher's disqualification. Ferrari themselves, meanwhile, were now ten points further back, albeit with more than double the points of McLaren-Peugeot in fourth.