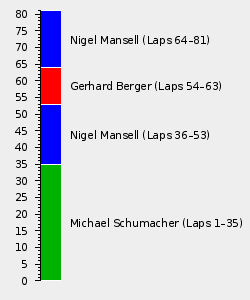 The LIX Australian Grand Prix, otherwise known as the 1994 Australian Grand Prix, was the sixteenth and final round of the 1994 FIA Formula One World Championship, staged at the Adelaide Street Circuit in Adelaide, South Australia, on the 13 November 1994.[1] The race would be won by Nigel Mansell, as Michael Schumacher claimed his maiden World Championship title after a clash with title rival Damon Hill ensured that both drivers retired.[1]

The weekend started with another round of driver changes, with Larrousse-Ford Cosworth taking Jean-Denis Délétraz and Hideki Noda, while Simtek-Ford Cosworth employed Domenico Schiattarella once again.[1] Lotus, meanwhile, were gearing up for what threatened to be their final Grand Prix weekend, with no other changes to the top teams.[1]

Qualifying saw Schumacher show the first signs of pressure, crashing heavily during the Friday session to wreck his race car.[1] Fortunately for him his time had been good enough for second behind Nigel Mansell, with title rival Hill, just a point behind the German ace at the start of the weekend, claiming third.[1] Rain on Saturday would deny any chance of further improvement.[1]

It was dry on Sunday, with Schumacher making the best start to leap ahead of Mansell, although Hill managed to follow him through.[1] Those two duly sprinted away from the chasing pack with Hill glued to the German's tail, while Mansell tried to hold third.[1]

Ultimately Mansell would make a minor mistake and slip behind Mika Häkkinen and Rubens Barrichello, although he would manage to battle back past the Jordan-Hart after a few laps.[1] Out front, meanwhile, Hill was able to remain tucked under Schumacher's wing through to the pitstops, with the top two staying out for the longest as neither wanted to surrender track position.[1]

Hill's pressure finally told on lap 36, with Schumacher running wide at the East Terrace and smacking the wall.[1] The German racer then swept back across the track into the path of Hill as the Brit tried to get a run on the Benetton, resulting in Schumacher getting tipped on two wheels before sliding into the barriers.[1] Schumacher was now out, the only question was how damaged was Hill's car.[1]

Hill would try to carry on after the incident, although it was clear that his Williams-Renault had major suspension damage.[1] The Brit stopped a lap later for repairs but nothing could be done, leaving him out of the race and Schumacher celebrating his maiden Championship at the side of the circuit.[1]

On track, meanwhile, Mansell would inherit the lead of the race, although he had Gerhard Berger glued to his tail, with the Austrian ace throwing his Ferrari relentlessly at the Williams.[1] Ultimately, however, Mansell would soak up all of the pressure from the Austrian ace, resulting in Berger making a minor mistake in the closing stages and dropping off the back of the #2 car.[1]

With that the race was over, with Mansell sweeping across the line to claim his 31st and final World Championship victory.[1] Berger duly came home second ahead of Martin Brundle, the Brit having got ahead of teammate Häkkinen to complete the podium moments before the Finn crashed out of the race in the closing stages.[1]

The debate over Schumacher's move would rumble on for years after the race, with Hill and Williams opting not to protest the result.[1] Furthermore, the race would be the final one for seven time World Constructors Champions Team Lotus, and the last to feature an entry larger than the available grid slots.[1]

Damon Hill's sixth victory of the season left the British driver just a point behind Championship leader Michael Schumacher ahead of the season finale, meaning it would be winner takes all in Australia. Indeed, if Schumacher finished ahead of the Brit that he would become the first German World Champion, while Hill had to finish fifth or higher just to overhaul Schumacher's tally. Elsewhere, Gerhard Berger was secure in third ahead of Mika Häkkinen, with the Finn set to battle with Jean Alesi for fourth.

The Constructors Championship was also to go down to the finale in Adelaide, with Williams-Renault and Benetton-Ford Cosworth separated by just five points. It was the former who held the advantage ahead of the finale, having moved ahead of the latter as a result of the battle of Japan. Various permutations could see either team win, with a one-two for either guaranteeing them the title, while Ferrari were set to finish a distant third.

The full entry list for the 1994 Australian Grand Prix is outlined below:

The full qualifying results for the 1994 Australian Grand Prix are outlined below:

The full results for the 1994 Australian Grand Prix are outlined below:

Regardless of whether his actions were sporting or otherwise, the 1994 FIA Formula One World Championship Champion would be Michael Schumacher, becoming the first German born racing driver to claim the crown. Damon Hill would finish the season just a point behind the German racer, a feat that would earn him many accolades for both his performance and his grace in defeat. Gerhard Berger, meanwhile, would finish the season in a distant third, with Mika Häkkinen and Jean Alesi completing the top five.

In the Constructors Championship it was Williams-Renault who emerged with the crown, ending the campaign on 118 points. Benetton-Ford Cosworth hence lost out on a maiden title by fifteen points, having claimed eight victories to the Champions' seven. Behind, Ferrari would end the season in third ahead of McLaren-Peugeot, while seven time Champions Lotus would bow out of F1 having failed to score a single point in 1994.

Retrieved from "https://f1.fandom.com/wiki/1994_Australian_Grand_Prix?oldid=84343"
Community content is available under CC-BY-SA unless otherwise noted.