Formula 1 Wiki
Register
Don't have an account?
Sign In
Advertisement
in: British Grand Prix, 1991 Grands Prix, Formula One races in the United Kingdom 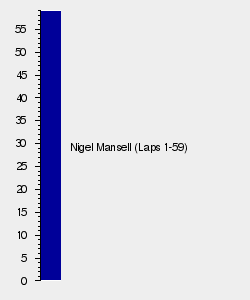 The 1991 British Grand Prix was the eighth Grand Prix of the 1991 Formula One Championship, held at Silverstone in the United Kingdom of Great Britain and Northern Ireland.[1] The end of the race marked the halfway mark of the season, and produced one of the most heart warming images in Formula One history.

Home favourite Nigel Mansell claimed his second successive victory in 1991, and his fourth win at a British circuit at F1 level. He also stopped to give rival Ayrton Senna a lift back to the pits on his victory lap, after the Brazilian ran out of fuel on the last lap.[1] Gerhard Berger and Alain Prost completed the podium, as the Championship battle tightened up for the first time all season.[1]

The break between the French and British Grand Prix saw very few changes to the make up of the paddock, as teams worked to improve their cars. Of note was a fresh investment in Benetton, provided by Tom Walkinshaw after he bought a 35% stake in the team. With a wave of British fans turning out to see Nigel Mansell attempt to take victory, Brabham were hoping that that love would aid them, as they sought to avoid having to pre-qualify for the rest of the season, having had a terrible start to the season.

The Championship battle had seen Ayrton Senna's lead cut, but remaining healthy with the Brazilian holding a 25 point advantage over Mansell. Riccardo Patrese and Alain Prost were next in the table, with the former also bringing a qualifying record that had seen only himself and Senna start from pole all season. Only one other Brit had scored in 1991 other than Mansell, and that was Julian Bailey, as his replacement at Team Lotus, Johnny Herbert joined the two Brabham drivers Martin Brundle and Mark Blundell in searching for their first points of the season.

It was advantage McLaren-Honda in the Constructors' Championship, although they were coming under ever increasing pressure from Williams-Renault, who were now judged to have the superior car. Ferrari had climbed to third in France but were still considered to be struggling, as Benetton and Tyrrell completed the top five. Jordan Grand Prix, making their debut at the circuit where Eddie Jordan had opted to make their base, were in an impressive sixth, with Dallara-Judd in seventh as the pair attempted to free themselves from pre-qualifying.

The full entry list for the 1991 British Grand Prix is shown below:

It was to be a significant weekend for the Championship, as it would serve as the final time that Pre-Qualifying was used for some of the current eight forced to compete in it.[1] Intended to be used as a safety measure by the FIA to prevent more than 30 cars on the circuit at any one time, it had initially seen new boys Jordan and Lambo-Lamborghini join Dallara-Judd, Coloni and Fondmetal in having to prove their right to enter qualifying. So far, Jordan and Dallara had dominated the session and scored, meaning they were almost certain to escape competing it after the British Grand Prix, replaced by two of the poorer teams from the automatic qualifiers.

It was, once again, the Jordan and Dallara show in pre-qualifying, as their four combined cars made it through to the full qualifying session. Fastest was JJ Lehto, almost three quarters of a second faster than Andrea de Cesaris in the first of the Jordans. Emanuele Pirro claimed the third spot ahead of Bertrand Gachot, dumping a familiar quartet out of the weekend all together. Out went Nicola Larini, Eric van de Poele (Lambo), Pedro Chaves (Coloni} and Olivier Grouillard.[2]

In the full session, there was little anyone could do to stop the man of the people, as Nigel Mansell swept his Williams-Renault to pole position on Saturday, beating qualifying specialist Ayrton Senna by over half a second.[1] Mansell's team mate Riccardo Patrese would start third, over a second slower than his team mate, as Gerhard Berger put the #2 McLaren-Honda on the second row.[1] The Ferraris would have to share row three, with the Benettons sharing the fourth row, as Stefano Modena completed the top ten.[1]

Lehto went fastest of the pre-qualifiers in eleventh, as all four once again qualified for the race, with de Cesaris thirteenth, Gachot seventeenth and Pirro eighteenth.[1] The two AGS cars almost certainly booked their places in pre-qualifying as both failed to qualify again, while Stefan Johansson, in possibly his last race for Footwork also dropped out.[2] Template:Eric Comas in the Ligier filled the last spot, leaving Thierry Boutsen to battle the Brabhams alone to prevent the same fate.[2]

The final result for the 1991 British Grand Prix is outlined below:

The grid for the 1991 British Grand Prix is displayed below:

With Mansell-Mania continuing to fill the atmosphere around Silverstone, there was only one acceptable winner for the fans on Sunday. A warm, dry day had emerged on Sunday, with no threat of rain at all, nor were there any changes to the starting order ahead of the race.[1]

Mansell lit up the rear wheels of his Williams-Renault off the start, meaning he had to watch as a perfect start for Ayrton Senna launched the World Champion into the lead.[3] A stunning start for Roberto Moreno put him up to third, as Riccardo Patrese and Gerhard Berger made contact after the Austrian hit the curb on the inside of Copse.[3] Patrese was hit by the McLaren-Honda as Berger bounced into the side of him, causing the Italian to spin, a fate shared by Bertrand Gachot further down.[3]

But the home fans were not to be denied, as Mansell dived up the inside of Senna into Stowe at the end of the hanger straight, taking back the lead. A huge cheer erupted around the circuit, as the race settled some what. On lap three, Moreno succumbed to Berger on his recovery charge, the Austrian unpunished for the contact that ultimately caused Patrese's retirement.[3] Berger then set about drawing in Senna in second, after the Brazilian joined Mansell in scampering away from the rest of the field.

Moreno began to fall back down the field, as Nelson Piquet and Alain Prost forced their way past in short order, as Jean Alesi found his way past one of the Leyton House entries.[3] Alesi was soon past the tumbling Benetton, before working with team mate Prost to battle their way past Berger for third and fourth.[3] Alesi then caught Prost sleeping on lap twelve, diving past into the Priory corner, before continuing the scarlet fight against Berger's McLaren.[3]

After ten laps, Alesi was starting to come under pressure from Prost, allowing Berger to relax a little. That was until Alesi pulled an identical move on Berger as he had done on Prost, before running the McLaren wide to allow Prost to attack into Brooklands.[3] Prost duly went through the door barged open by Alesi, slotting into fourth behind the Sicilian, as Berger took the double move pulled upon him as a signal to pit.[3]

The cameras were back on the Ferraris three laps later, as the pair began to catch Senna in second, the Brazilian beginning to struggle with traffic.[1] They were just in time to see Prost lock up the his rear axle after hitting the curb into Vail, causing him to spin his scarlet car and ruin his tyres.[1] Prost lost more time cleaning his tyres over the following laps, before being promoted to third as Alesi limped into the pits with a broken nose and suspension damage.[3] Alesi was to climb out his car, after contact with a back marker, Aguri Suzuki, that also put the Japanese driver out.[1]

Mansell lost time after Williams kept him out until well past the optimum time to change, meaning he emerged from the pits only a couple of seconds ahead.[3] Within a few laps, Mansell's lead was a healthy ten seconds again, after a succession of fastest laps, which would be an advantage he looked unlikely to surrender.

Further down, Andrea de Cesaris suffered a suspension failure going through Abbey, throwing his Jordan into a spin that ended up in the wall on the straight leading to Bridge.[1] The front of the car hit the barrier, ripping the front left corner clean off, with momentum carrying the Italian along the entire straight.[3] His slide also carried him in front of Stefano Modena and Alain Prost, both of whom had to slam on the brakes to avoid hitting the ruined Jordan.[3] de Cesaris emerged, amazingly, unscathed, although he was taken to the medical centre for checks when he returned to the paddock.

In the closing stages, Bertrand Gachot was forced to surrender fifth to Nelson Piquet, on a charge to get back on terms with the leaders.[3] Mark Blundell, meanwhile, had been running in the top ten before suffering an engine failure just seven laps from the end, a position which would have meant Brabham escaped pre-qualifying. But, that mattered little to the British fans, as Mansell cruised to the finish line to celebrate a second Siliverstone triumph.[3]

But, there was one last twist, as Senna ground to a halt on the final lap having run out of fuel.[3] As he emerged from his stricken McLaren, Berger and Prost flashed past to record their podium finishes, leaving Senna fourth as no one else was on the lead lap.[3] As Mansell celebrated on the victory lap, he pulled up to the Brazilian, waving him onto the side of the Williams, a quick tap on the helmet by Senna acknowledging the gesture.[3] In a post race interview, Mansell later revealed that he had a gearbox problem, and ran the last two laps in one gear.[3]

The final results for the 1991 British Grand Prix are shown below:

Ayrton Senna hit the 50 point mark as a result of the British Grand Prix, but it was Nigel Mansell with the momentum, closing the gap to eighteen (the smallest it had been since the 1991 San Marino Grand Prix). Riccardo Patrese remained in third place, with Alain Prost now one point behind him, while Nelson Piquet held off Gerhard Berger for fifth. Bertrand Gachot added to Jordan's impressive tally, as they scored for the fifth consecutive race.

McLaren-Honda again saw their lead reduced, as they left Britain with twelve points in hand over Williams-Renault in second. Ferrari were now a solid third, with Brabham-Ford Cosworth beginning to look an increasingly lonely fourth. Tyrrell-Honda, meanwhile, were coming under increasing pressure from Jordan, who confirmed their escape from pre-qualifying. Brabham-Yamaha, would take up their place in the session instead.