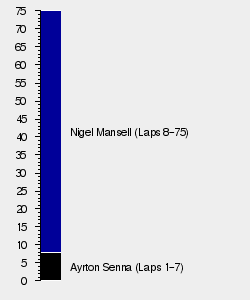 The 1985 European Grand Prix, otherwise advertised as the XXXVII Shell Oils Grand Prix of Europe, was the fourteenth round of the 1985 FIA Formula One World Championship, staged at Brands Hatch in the UK on the 6 October 1985.[1] The race would see Nigel Mansell claim a popular maiden victory on home soil, as Alain Prost secured his maiden World Championship triumph.[1]

Qualifying had seen Ayrton Senna grab pole position for Lotus-Renault once again, edging out compatriot Nelson Piquet of Brabham-BMW.[1] The second row proved to be an all-Williams-Honda affair, Mansell ahead of Keke Rosberg, while Prost grabbed sixth with title rival Michele Alboreto down in twelfth.[1]

The start would see Rosberg make an initially awful getaway, allowing Mansell to charge into second behind Senna.[1] Prost, meanwhile, would get caught out by the slow starting Finn, and duly dropped to fourteenth after a bounce across the grass trying to avoid the Williams-Honda.[1]

The early stages would see Mansell slip back behind both Rosberg, who made up for his poor start by immediately leaping back into second, and Piquet, while Prost fought his way back into the top ten.[1] The top four would subsequently pull clear of Elio de Angelis and Marc Surer, while Derek Warwick was an early retirement when his fuel injectors failed.[1]

However, the entire picture of the race was to change on lap seven, for a lunge from Rosberg on Senna for the lead would result in the Williams getting pitched into a spin.[1] Piquet, running right behind the Finn, duly smashed into the front wheel of the pirouetting Finn and destroyed the front of his car, while Mansell swept through to claim second.[1]

Rosberg would manage to limp back to the pits and rejoin, losing almost an entire lap as he had his punctured tyre replaced.[1] Indeed, the Finn would sprint out of the pits just in time to aid teammate Mansell's bid for the lead, managing to "accidentally" hold Senna up enough for Mansell to catch and pass the Brazilian.[1]

With Mansell leading Rosberg was cleared to unlap himself, with the Finn duly sprinting away to catch the back of the field.[1] Elsewhere, Prost had moved back into the top six, but was being harassed by Jacques Laffite, while Alboreto's race came to an early end with a turbo failure.[1]

Indeed, the rest of the race would be about Prost's bid for the title, for the Frenchman only needed to finish fifth once Alboreto disappeared.[1] However, Prost's pace was not particularly strong, and as the race entered its final phases he would be passed by both Laffite and a charging Rosberg.[1] Fortunately for him a series of retirements would keep him up in the top six, before a late move on de Angelis left him in fifth.[1]

With that the race was run, with Mansell sweeping home to claim victory from Senna by twenty seconds, while Rosberg was a full minute behind in third.[1] Prost, meanwhile, would clinch the title with fourth, following a late engine failure for Laffite, with de Angelis and Thierry Boutsen completing the points.[1]

The three points Prost registered for fourth ensured that he became the first French World Champion in F1 history. His team McLaren-TAG Porsche, meanwhile, were a race away from claiming the Constructors' Championship for the second successive season, with two races left in 1985.

Third place in Belgium had ensured that Alain Prost extended his Championship lead over Michele Alboreto, with the pair having ended the weekend some sixteen points apart. Indeed, with just 27 points left to fight for Prost could realistically win the title at Brands Hatch, provided he scored two more points than Alboreto. Elsewhere, Ayrton Senna had moved into third after his second victory of the season, with Elio de Angelis having continued to slip away in fourth.

The Constructors Championship was still being led by McLaren-TAG Porsche after the battle of Belgium, although their lead was still a fairly insecure six points. Indeed, Ferrari had only dropped a couple of points further behind the Anglo-German effort after the visit to Spa, and hence remained a major contender for the title. Furthermore, Lotus-Renault had closed the gap in third, moving to within twenty points of the leaders.

The full entry list for the 1985 European Grand Prix is outlined below:

The full qualifying results for the 1985 European Grand Prix are outlined below:

The full results for the 1985 European Grand Prix are outlined below:

Fourth place was more than enough for Alain Prost to claim his maiden World Championship, the Frenchman becoming the first man from La République to claim the crown. Indeed, Michele Alboreto would have to settle for second after his retirement at Brands Hatch, with the Italian holding a healthy fifteen point advantage over third placed Ayrton Senna. The Brazilian himself, meanwhile, could secure his first top-three Championship finish in South Africa, if he could outscore teammate Elio de Angelis.

In the Constructors' Championship it was advantage McLaren-TAG Porsche with two rounds to go, with the Anglo-German effort needing to outscore Ferrari by six points in South Africa to take the crown. Indeed, the Italian team were now under serious threat of losing second, with Lotus-Renault making a late bid for the title amid Senna's late form. The Ethel effort would head to Kyalami fifteen points behind the leaders, and just six off the back of the Scuderia in second, although McLaren-TAG Porsche were still favourites regardless.