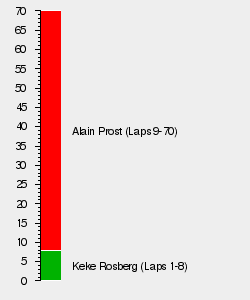 The 1984 Portuguese Grand Prix, otherwise officially known as the IV Grande Premio de Portugal, was the sixteenth and final round of the 1984 FIA Formula One World Championship, staged at the Autódromo do Estoril on the 21 October 1984.[1] The race, which was the first Grand Prix to be staged in Portugal since 1960, would see Niki Lauda claim his third World Championship title by just half a point.[1]

However, Lauda would have to overcome a poor qualifying performance to do so, with the Austrian a lowly eleventh in his McLaren-TAG.[1] Furthermore, his main Championship rival, and teammate, Alain Prost would grab second on the grid, having been beaten to pole by Nelson Piquet.[1]

The start of the race would see Piquet and Prost make poor starts, allowing Keke Rosberg and Nigel Mansell to duel for the lead into the first corner.[1] Further back, meanwhile, Lauda would battle his way up into the top ten off the grid, before lining up a move on Derek Warwick for ninth.[1]

The early stages would see Prost make progress, with the Frenchman moving into the lead of the race on lap nine.[1] Lauda, meanwhile, would get stuck in ninth in a long queue of traffic that was struggling to get past Rosberg in third.[1]

Indeed, it was only when tyre wear came into play that the Austrian finally made progress, with a series of moves carrying him into the points on lap 28.[1] Up ahead, meanwhile, Prost had built a healthy lead over Mansell, while Ayrton Senna had elbowed his way past Rosberg to claim third.[1]

Rosberg and Senna would fall to Lauda shortly before half-distance, although the Austrian was unable to make any progress on Mansell.[1] That was, until Mansell picked up a brake issue and spin on lap 51, with the Brit only just managing to rejoin ahead of Lauda.[1]

Yet, that was effectively it for Mansell's race, with the Brit spinning in the exact same spot a lap later and so retired.[1] That left Lauda in second, the exact position he needed to claim the Championship crown, provided he could finish there.[1]

Ultimately there would be no late twist of fate in the closing stages, with Prost cruising home to win the race, but to lose the World Championship to Lauda by just half a point.[1] Indeed, it was the closest ever finish in terms of the overall World Championship, although Prost had won seven races to Lauda's five.[1]

Elsewhere, Senna would come home in third in his last race for Toleman-Hart, while Michele Alboreto grabbed fourth for Ferrari, just three tenths behind the Brazilian.[1] Elio de Angelis finished fifth to claim third in the World Championship, while out-going World Champion Piquet ended the season with a sixth place finish.[1]

In terms of the Championship victory last time out at the Nürburgring had kept Alain Prost's title hopes alive heading into the season finale, with the Frenchman just 3.5 points behind teammate Niki Lauda. However, the Austrian would win his third World Championship if he finished second in Estoril, regardless of what Prost did, with the Frenchman having to finish third or higher just to overhaul Lauda's tally. The battle for third would also have to be concluded at the final race, with Elio de Angelis, the man in third, through to Derek Warwick in seventh, all having a mathematical chance to finish best of the rest in Portugal.

In the Constructors' Championship McLaren-TAG had continued to show their dominance in Germany, with the Anglo-German effort ending the European Grand Prix with 128.5 points to their name. Ferrari had remained their closest "challengers", albeit with less than half the number of points, and had opened a 9.5 point advantage over third placed Lotus-Renault. Indeed, with one race to go the fight for second seemed to be over, although the Ethel based squad still had a mathematical chance of overhauling the Scuderia on Portuguese soil.

The full entry list for the 1984 Portuguese Grand Prix is outlined below:

The full qualifying results for the 1984 Portuguese Grand Prix are outlined below:

The full results for the 1984 Portuguese Grand Prix are outlined below:

Alain Prost would win the battle of Portugal but ultimately lost the war, the Frenchman suffering a narrow defeat for a third straight season. Instead, it was Niki Lauda who ended 1984 as the World Champion, his third title and first since 1977, with a record half a point separating the two teammates. Third, meanwhile, would go to Elio de Angelis, with the Italian's compatriot Michele Alboreto, and out-going Champion Nelson Piquet, completing the top five.

In the Constructors' Championship, meanwhile, it had been an imperious season for McLaren-TAG, with the Anglo-German effort ending the season with a huge tally of 143.5 points. Indeed, McLaren had claimed over 61% of the points on offer in 1984, having won twelve of the season's sixteen races and only failed to score points at all in two. Unsurprisingly, there was then a huge gap back to arch-rivals Ferrari in second, while Lotus-Renault concluded a surprisingly competitive season in third.

Retrieved from "https://f1.fandom.com/wiki/1984_Portuguese_Grand_Prix?oldid=81934"
Community content is available under CC-BY-SA unless otherwise noted.