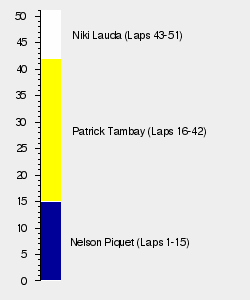 The 1984 Italian Grand Prix, officially known as the LV Gran Premio d'Italia, was the fourteenth round of the 1984 FIA Formula One World Championship, staged at the Autodromo Nazionale Monza on the 9 September 1984.[1] The race would be the first ever Grand Prix not to feature a naturally aspirated car on the entry list, following confirmation of Tyrrell-Ford Cosworth's ban.[1]

Indeed, the British squad had attended an FIA Court of Appeal tribunal to appeal against their ban in the fortnight since the Dutch Grand Prix, which had been enforced after the Tyrrell 012 failed post-race scrutineering back in Detroit.[1] Unfortunately for them the FIA upheld the ban, allowing FISA to deny Tyrrell entries to the final three races of the season and hence remove them from the FISA Technical Committee for 1985.[1]

For the Italian Grand Prix itself it was Nelson Piquet who emerged with pole position after qualifying, the powerful Brabham-BMW proving the class of the field.[1] Alain Prost would start the race from second, 0.5 points behind Championship leading teammate Niki Lauda, with the Austrian himself starting from fourth.[1]

Unsurprisingly Piquet was able to power ahead of Prost at the start to claim an early lead, while a poor start from Elio de Angelis left the Frenchman in a solid second.[1] Lauda, meanwhile, would have a difficult getaway and so dropped behind Patrick Tambay and Teo Fabi, with the latter two surging ahead of de Angelis later on during the opening tour.[1]

Prost's race was to end very early on, with the Frenchman suffering a rare TAG engine failure at the start of lap four.[1] Fabi would then spin on the Frenchman's oil, although he managed to rejoin ahead of Lauda after the Austrian lost time trying to pass de Angelis.[1]

Quick fire retirements would thin the field behind, before de Angelis' race came to an end with a gearbox failure, moments after teammate Nigel Mansell spun out of the race.[1] Piquet's race would also come to a premature end, his BMW engine making a smokey exit on lap sixteen, handing the lead to Tambay.[1]

Tambay would remain in complete control of the race until the closing stages, when his Renault broke a throttle linkage.[1] That, combined with an explosive engine failure for Fabi, put Lauda in control of the race, with the Austrian left holding a sizeable lead over the now second placed Michele Alboreto.[1]

With that the race was run, with Lauda cruising home almost 25 seconds clear of the Italian's Ferrari, extending his Championship lead to 9.5 points.[1] Behind them came Riccardo Patrese, whose Alfa Romeo had surprisingly made the distance, with Stefan Johansson, Jo Gartner and Gerhard Berger completing the points.[1]

Alain Prost's fifth win of the season in Zandvoort had put the Frenchman just half a point off of teammate Niki Lauda at the head of the Championship hunt, with the pair realistically the only drivers fighting for the crown. Indeed, third placed Elio de Angelis would have to win in Italy just to stay in the hunt, with a 22 point gap between himself and Lauda. He was therefore in a fight for third which included René Arnoux, Nelson Piquet and Derek Warwick.

In contrast the World Championship for Constructors battle was already over, for McLaren-TAG had wrapped up the title with three races to spare back in the Netherlands. Indeed, their stunning tally of 107.5 left them 52.5 points clear of second placed Lotus-Renault, with just 45 points left to fight for in 1984. The Ethel based squad were therefore fighting for second, with Ferrari, Renault and Brabham-BMW all in the hunt to finish as runner-up.

The full entry list for the 1984 Italian Grand Prix is outlined below:

The full qualifying results for the 1984 Italian Grand Prix are outlined below:

The full results for the 1984 Italian Grand Prix are outlined below:

Niki Lauda's fifth victory of the season ensured that he would head to European Grand Prix at the Nürburgring with a 9.5 point lead at the head of the field, meaning he would take the title with victory. Indeed, Alain Prost would have to finish ahead of his Austrian teammate if he was to keep his title challenge alive, with neither driver set to lose points as a result of the dropped score rule. Behind, Elio de Angelis was now too far back to challenge having failed to score, leaving him at the head of the fight to finish third.

With McLaren-TAG already declared as Constructors Champions all of the focus in Italy had been on the fight for second, where Ferrari had moved back ahead of Lotus-Renault. Indeed, the Scuderia had moved 1.5 points ahead in their season-long game of leapfrog, having trailed the team from Ethel by 4.5 at the start of the weekend. Those two also looked set to duel for the runner-up spot until the end of the season, although Renault and Brabham-BMW still had a mathematical chance of overtaking them.