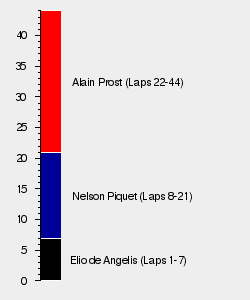 The XLVI Großer Preis von Deutschland, otherwise known as the 1984 German Grand Prix, was the eleventh round of the 1984 FIA Formula One World Championship, staged at the Hockenheimring in West Germany on the 5 August 1984.[1] The race would be remembered for a seemingly dominant one-two for McLaren-TAG, as Alain Prost and Niki Lauda continued their duel for the crown.[1]

It was the former who was the faster in qualifying, the Frenchman grabbing pole by just half a tenth from Lotus-Renault's Elio de Angelis.[1] Indeed, Lauda would be a disappointing seventh on the grid, almost two seconds off of Prost's pace, with Derek Warwick and Patrick Tambay, Nelson Piquet and Michele Alboreto sharing the second and third rows ahead of the Austrian.[1]

The start of the race would see de Angelis slither ahead of Prost into the first corner, while a fast starting Piquet leapt into third.[1] Ayrton Senna also made a good getaway to jump into sixth ahead of Lauda, with the Austrian slipping to tenth later on the opening tour.[1]

The order remained fairly stable at the head of the field during the early stages, although Senna was to make a spectacular exit when his rear-bodywork blew apart on lap three.[1] Indeed, the suddenly wingless Toleman-Hart would throw itself into the barriers at the back of the circuit, with Senna left to clatter along the barriers to an eventual halt.[1]

de Angelis' lead would last until the eighth tour, when the Italian's engine blew itself apart on the run into the stadium.[1] Prost should have inherited the lead, although he was to be mugged by Piquet as they came across the stricken Lotus meaning it was the Brazilian who led at the end of the lap.[1]

Behind, Lauda would make continue his steady ascent up the order, using the increasingly powerful slipstream effect to ease past Keke Rosberg for third.[1] The Finn himself had had a remarkable run to that point, having climbed from nineteenth to third before the Austrian's move, although it was not long before the Williams-Honda ground to a halt with an electrical issue.[1]

Piquet would continue to lead the race until just after half distance, with a gearbox failure, rather than the Brabham-BMW's customary turbo failure, ending his race.[1] That handed the lead to Prost, who was able to cruise knowing that teammate Lauda was under orders not to attack with the McLarens running one-two.[1]

Indeed the race was over from that point on, with Prost also collecting fastest lap en-route to victory.[1] Lauda was three seconds back in second, before a half-minute wait for third placed Warwick to take the chequered flag.[1] The rest of the points were shared between Nigel Mansell, Tambay and René Arnoux, all having had relatively quiet afternoons.[1]

The result of the German Grand Prix meant that Prost held a 4.5 point lead over teammate Lauda heading into the final phase of the season, with the dropped score rule coming into effect from the Austrian Grand Prix onward.[1]

In terms of the Championship victory last time out at Brands Hatch had launched Niki Lauda right back into title contention, with the Austrian ace ending the weekend just 2.5 points off of teammate Alain Prost. Indeed, Prost's poor run of reliability prior to the race in Germany had seen his advantage over the field largely collapse, with Elio de Angelis also within striking distance upon arrival in Hockenheim. Elsewhere, René Arnoux and Keke Rosberg had retained their top five positions, while Ayrton Senna had climbed back into the top ten after his second visit to the podium in the UK.

In the Constructors Championship it still looked to be McLaren-TAG's title to lose arriving in Germany, with the Anglo-German firm heading into the final third of the season with 68.5 points to their name. That left them 33 points clear of closest challengers Ferrari, who were just half a point ahead of Lotus-Renault as they swapped places again after the battle of Britain. Renault were next, eight off of their Norfolk based customers, while Williams-Honda completed the top five at the start of the weekend in Germany.

The full entry list for the 1984 German Grand Prix is outlined below:

The full qualifying results for the 1984 German Grand Prix are outlined below:

The full results for the 1984 German Grand Prix are outlined below:

Alain Prost managed to extend his Championship lead with victory at the Hockenheimring, although with teammate Niki Lauda finishing second his advantage had only grown by three points. Indeed, the Austrian remained a significant threat to the Frenchman's title hopes, with the pair separated by just 5.5 points at the end of the weekend. A ten point gap then appeared before third placed Elio de Angelis appeared in the title hunt, with the Italian yet to win a race.

In the Constructors Championship McLaren-TAG were effectively just two races away from claiming the crown, with just 75 points left to fight for across the final five races. Indeed, their one-two in Germany had handed them a 45.5 point lead over Lotus-Renault at the head of the field, meaning the Norfolk squad would have to win every race until the end of the season just to match McLaren-TAG's 83.5 tally. They, therefore, were focusing on the fight for second, with just five points covering themselves, Ferrari and Renault in fourth.