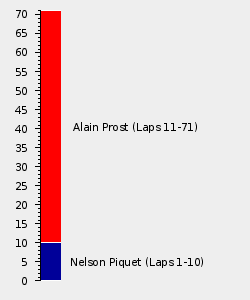 The 1984 Dutch Grand Prix, otherwise officially known as the XXVII Grote Prijs van Nederland, was the thirteenth round of the 1984 FIA Formula One World Championship, staged at the Circuit Park Zandvoort in the Netherlands on the 26 August 1984.[1] The race would see Alain Prost and Niki Lauda claim their third one-two of the season for McLaren-TAG, leaving them just half a point apart in the Championship.[1]

Qualifying had seen Prost grab pole position for the race, while a low-key Lauda found himself starting from sixth.[1] He would therefore have to get ahead of Nelson Piquet, Elio de Angelis, Derek Warwick and Patrick Tambay to challenge his teammate for victory.[1]

Unfortunately raceday would be overshadowed by events off the circuit, with an ageing walkway above the pitlane collapsed, injuring several people.[1] Elsewhere, there would be a controversial announcement by Lotus, who revealed that they had signed Brazilian star Ayrton Senna for 1985 in spite of the fact that Senna had a two-year contract with Toleman.[1]

When the race did get underway it proved to be an underwhelming start for the two McLarens, with Prost beaten by Piquet into Tarzan, while Lauda slipped to ninth.[1] Indeed, the star of the start instead proved to be Keke Rosberg, who jumped to fifth from seventh on the grid, while Tambay leapt into third to challenge Prost.[1]

Rosberg's charge would carry on throughout the early stages, with the Finn moving into third with quick fire moves on de Angelis and Tambay.[1] Lauda was also showing what fight he had, with the Austrian ace picking his way back up the order to claim fourth at the start of lap nine.[1]

That soon became third when Piquet's BMW engine expired in a plume of smoke, a failure that also put Prost into the lead.[1] The Frenchman duly eased away from the now second placed Rosberg, who was to relinquish second to Lauda a lap after Piquet's demise.[1]

The McLarens quickly disappeared out of sight, running one-two through to the chequered flag to secure the Constructors Championship for McLaren-TAG with three races still to go.[1] Third looked set to go to Rosberg, only for a late charge from Nigel Mansell to carry the Brit from sixth to third in the closing stages.[1] Rosberg, meanwhile, would run out of fuel with two laps to go, meaning the remaining points were shared between de Angelis, Teo Fabi and Tambay.[1]

The results of the race ensured that Lauda still held the lead in the Championship with 54 points, while teammate Prost ended the weekend on 53.5.[1]

In terms of the Championship victory last time out for Niki Lauda had meant that he moved to the top of the Championship standings, establishing a 3.5 point lead over teammate Alain Prost. It was the first time all season that someone other than the Frenchman had led the title hunt, although Prost remained the favourite heading into the final four races. Furthermore, Lauda's leap had opened a significant gap back to third placed Elio de Angelis, with the Italian racer 15.5 points off of second placed Prost arriving at Zandvoort.

The Constructors Championship, meanwhile, was all but settled in favour of McLaren-TAG, the Anglo-German squad having ended the Austrian weekend 42 points clear, with just 60 left to fight for. Ferrari, meanwhile, had emerged as their closest challengers, getting back ahead of Lotus-Renault in the latest edition of their game of leapfrog, although the Ethel based effort were only 2.5 points behind the Scuderia. Renault were also in the battle for fourth landing in the Netherlands, as were Brabham-BMW in spite of their awful reliability throughout the season.

The full entry list for the 1984 Dutch Grand Prix is outlined below:

The full qualifying results for the 1984 Dutch Grand Prix are outlined below:

The full results for the 1984 Dutch Grand Prix are outlined below:

Alain Prost's fifth win of the season put the Frenchman just half a point off of teammate Niki Lauda at the head of the Championship hunt, with the pair realistically the only drivers fighting for the crown. Indeed, third placed Elio de Angelis would have to win the next race in Italy just to stay in the hunt, with a 22 point gap between himself and Lauda. He was therefore in a fight for third, which included René Arnoux, Nelson Piquet and Derek Warwick.

In contrast the World Championship for Constructors battle was already over, for McLaren-TAG were now out of reach of the rest of the field. Indeed, their stunning tally of 107.5 left them 52.5 points clear of second placed Lotus-Renault, with just 45 points left to fight for in 1984. The Ethel based squad were therefore fighting for second, with Ferrari, Renault and Brabham-BMW all in the fight.

Retrieved from "https://f1.fandom.com/wiki/1984_Dutch_Grand_Prix?oldid=81926"
Community content is available under CC-BY-SA unless otherwise noted.