Formula 1 Wiki
Register
Don't have an account?
Sign In
Advertisement
in: 1984 Grands Prix, British Grand Prix, Formula One races in the United Kingdom 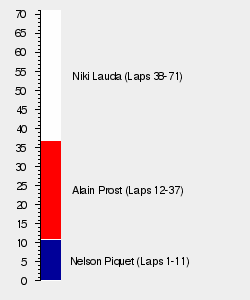 Qualifying would see Nelson Piquet sweep to pole in his Brabham-BMW, with Alain Prost and Lauda his closest challengers.[1] At the back, meanwhile, the two Tyrrells of Stefan Johansson and Stefan Bellof, allowed to enter as a result of the appeal against their ban, both qualified for the race, although they were well off the pace.[1]

The start of the race would see Piquet leap into an early lead off the grid, with Prost and Lauda chasing him into Paddock Hill Bend.[1] The rest of the field thundered in behind Elio de Angelis, although a huge accident partway around the opening tour would eliminate four cars from the proceedings.[1]

Heading into Bottom Bend Riccardo Patrese tried a lunge inside of Jacques Laffite, only to get out of shape and spin on the kerb.[1] Teammate Eddie Cheever, as well as Johansson both lifted off, only for Philippe Alliot to launch his RAM over the back of the Tyrrell and land atop of Cheever's Alfa Romeo.[1] Jo Gartner, meanwhile, would shoot himself into the barriers while trying to avoid the accident.[1]

The race carried on regardless, however, with Piquet fighting hard to keep the two McLarens at bay.[1] Indeed, it was only when Jonathan Palmer crashed heavily at Clearways on lap twelve, the result of a suspension failure, that the race was finally stopped, with all of the damaged cars removed from the circuit.[1]

Piquet's resistance would be broken at the restart of the race, with Prost lunging inside the Brazilian at Clearways to claim the lead.[1] He duly broke clear as Piquet worked to keep Lauda at bay, although the Austrian would eventually force his way into second on lap 29.[1]

A few laps later and Lauda was in the lead, Prost's race coming to an early end with a gearbox failure.[1] The Austrian subsequently eased ahead of Piquet as the second half of the race unfolded, with the Brazilian instead left to look over his shoulder.[1]

Lauda duly cruised home to claim a dominant victory half an hour later, with Derek Warwick and a buoyant Ayrton Senna completing the podium after Piquet's BMW sourced turbocharger predictably failed in the closing stages.[1] Elio de Angelis was a lap down in forth ahead of the two Ferraris, whom all overtook Piquet on the final lap.[1]

There had been some significant changes in the upper-reaches of the Championship as a result of the 1984 Dallas Grand Prix, although Champion-elect Alain Prost still held a healthy lead arriving in the UK. Indeed, at the end of the North American tour the Frenchman's lead stood at nine and a half points, with Elio de Angelis his closest challenger. The Italian himself was two ahead of Niki Lauda, with René Arnoux and Dallas race winner Keke Rosberg completing the top five.

In the Constructors Championship it was still McLaren-TAG whom led the charge upon arrival at their home race, in spite of the fact that they had failed to score at all in Dallas. Indeed, while Ferrari had moved back into second, half a point ahead of Lotus-Renault, they were still some 27 points off of the Anglo-German alliance with six races to go. Elsewhere, Williams-Honda had made some ground after their first victory of the season last time out, which saw them displace Brabham-BMW for fourth.

The full entry list for the 1984 British Grand Prix is outlined below:

The full qualifying results for the 1984 British Grand Prix are outlined below:

The full results for the 1984 British Grand Prix are outlined below:

Victory at Brands Hatch launched Niki Lauda right back into title contention, with the Austrian ace ending the weekend just two and a half points off of teammate Alain Prost. Indeed, Prost's poor run of reliability over the last few races had seen his advantage over the field largely collapse, with Elio de Angelis also within striking distance in third. Elsewhere, René Arnoux and Keke Rosberg retained their top five positions, while Ayrton Senna climbed back into the top ten after his visit to the podium.

In the Constructors Championship it still looked to be McLaren-TAG's title to lose, with the Anglo-German firm heading into the final third of the season with 68.5 points to their name. That left them 33 points clear of closest challengers Ferrari, who were just half a point ahead of Lotus-Renault as they swapped places again. Renault were next, eight off of their Norfolk based customers, while Williams-Honda completed the top five.