The Formula 1 Wiki
Register
Don't have an account?
Sign In
Advertisement
in: Pages using Timeline, Pages with reference errors, 1984 Grands Prix,
and 2 more 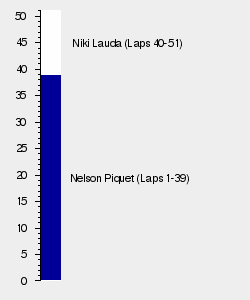 The 1984 Austrian Grand Prix, otherwise officially known as the XXII Großer Preis von Österreich, was the twelfth round of the 1984 FIA Formula One World Championship, staged at the Österreichring on the 19 August 1984.[1] The race, which was the 400th World Championship race, would see Niki Lauda grab his fourth win of the season on home soil, and claim the lead in the title hunt.[1]

Qualifying would, as ever, see Nelson Piquet grab pole in his Brabham-BMW, while Championship leader Alain Prost lined up in second.[1] Home hero Lauda, meanwhile, would find himself in fourth behind the Lotus-Renault of Elio de Angelis, while compatriot and F1 debutante Gerhard Berger qualified down in twentieth.[1]

Raceday saw clear skies and warm temperatures grace the Styrian Mountains, with no issues ahead of the start.[1] However, an issue with the starter's lights almost caused carnage when the field lined up on the grid, resulting first start having to be abandoned as some drivers pulled away while others sat in their grid slots.[1]

After a fair delay the start would eventually be made without a hitch, with Piquet easing ahead of Prost into the Hella Licht Chicane, while Lauda tumbled down to sixth after a poor start.[1] Indeed, the Austrian ace found himself stuck behind Renault teammates Derek Warwick and Patrick Tambay, as well as an equally sluggish de Angelis, having started on very cold Michelin tyres after a late swap on the grid.[1]

However, Lauda was determined to put on a show for his home fans, and duly battled back up to third as the Renault engined cars fought amongst themselves.[1] Out front, meanwhile, Piquet and Prost would exchange a few blows before the Brazilian established a small lead, although the Frenchman still had a healthy advantage over his charging teammate.[1]

That was, until the Frenchman hit an oil slick on lap 29, which had been left at the Jochen Rindt curve by de Angelis when his Renault engine expired.[1] The Frenchman duly shot off the circuit and into the barriers, while Piquet lost a lot of time to Lauda when he had a worrying slide a lap later.[1]

Lauda would spend the rest of the afternoon chasing down Piquet, and duly pounced on the Brabham with ten laps to go when the Brazilian was baulked by Michele Alboreto.[1] The Austrian ace duly shot away in the closing stages to claim victory ahead of Piquet, while a series of retirements late on would promote Alboreto's Ferrari onto the podium in third.[1]

The race would also be notable for being the first ever World Championship Grand Prix not to feature a naturally aspirated engine on the starting grid.

In terms of the Championship, Alain Prost had managed to extend his lead with victory at the Hockenheimring, although teammate Niki Lauda finished second to keep within striking distance. Indeed, the Austrian remained a significant threat to the Frenchman's title hopes upon arrival at his home race, with the pair separated by just 5.5 points. A ten point followed before third placed Elio de Angelis appeared in the title hunt, with the Italian yet to win a race.

In the Constructors Championship McLaren-TAG were effectively just two races away from claiming the crown upon arrival in Austria, with just 75 points left to fight for across the final five races. Indeed, their one-two in Germany had handed them a 45.5 point lead over Lotus-Renault at the head of the field, meaning the Norfolk squad would have to win every race until the end of the season just to match McLaren-TAG's 83.5 tally. They, therefore, were focusing on the fight for second, with just five points covering themselves, Ferrari and Renault in fourth at the start of the weekend in the Styrian Mountains.

The full entry list for the 1984 Austrian Grand Prix is outlined below:

The full qualifying results for the 1984 Austrian Grand Prix are outlined below:

The full results for the 1984 Austrian Grand Prix are outlined below:

Victory for Niki Lauda meant that he moved to the top of the Championship standings, establishing a 3.5 point lead over teammate Alain Prost. Indeed, it was the first time all season that someone other than the Frenchman had led the title hunt, although Prost remained the favourite heading into the final four races. Furthermore, Lauda's leap had opened a significant gap back to third placed Elio de Angelis, with the Italian racer 15.5 points off of second placed Prost.

The Constructors Championship, meanwhile, was all but settled in favour of McLaren-TAG, with the Anglo-German squad ending the Austrian weekend 42 points clear, with just 60 left to fight for. Ferrari, meanwhile, would emerge as their closest challengers, having gone back ahead of Lotus-Renault in the latest edition of their game of leapfrog, although the Ethel based effort were only 2.5 points behind the Scuderia. Renault were also in the battle for fourth, as were Brabham-BMW in spite of their awful reliability throughout the season.