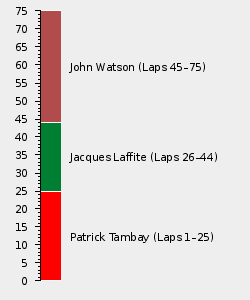 The 1983 United States Grand Prix West was the second race of the 1983 Formula One Season.[1] John Watson claimed a memorable win (which would also be his last in Formula One), while the grid was surprised by the return of Alan Jones, racing for the first time since 1981.

Nelson Piquet led the championship coming into the United States, with the paddock arriving at Long Beach for the final time.[2] The circuit had had modifications made to it once more, with the pitlane now on Shoreline Drive, and Ocean Blvd. no longer included on the circuit.

The entry list had remained unchanged in between Brazil and Long Beach, at least until Arrows had announced they had obtained the services of former champion Alan Jones.[1] They had gambled on the Aussie (whom came out of retirement just for the race) after failing to attract any sponsors over the winter, running completely white cars in Brazil.[1] For Jones, it would be the first race he had competed in since the 1981 Caesars Palace Grand Prix.

The full entry list for the 1983 United States Grand Prix West is shown below:

Practice revealed that the new layout had problems, particularly where old circuit met new.[2] This was most noticable on the exit of Seaside Way, where two bumps were so severe that many teams felt their cars would suffer suspension failure during the race.[2] René Arnoux was the first to brave the bumps, setting a time good enough for provisional pole before the main qualifying session.[2]

The bumps were flattened overnight to reduce their impact on the cars.[2]

The reduced bumpiness of the circuit allowed Patrick Tambay to take pole position over his team mate, beating Arnoux by eight tenths.[1] Keke Rosberg and Jacques Laffite gave Williams a second row lock out, while Elio de Angelis was the best of the Renault powered cars in fifth.[1] Alain Prost debuted the new Renault RE40, although his pace was hampered by his Michelin tyres, a fate shared by all of those supplied by the French tyre manufacturer.[1]

Alan Jones pushed the Arrows into twelfth position in qualifying, while Roberto Guerrero had his best time disallowed for having a loose piece of body work.[1] It was a bad day for Osella , as both Corrado Fabi and Piercarlo Ghinzani were eliminated during qualifying.[1] McLaren were also in trouble, with Watson and Niki Lauda well down in 22nd and 23rd places respectively.[1]

* Guerrero's time was disallowed due to damaged bodywork.[1]

Before the race rumours emerged that the 1983 Long Beach Grand Prix would be the last, although the man behind the event, Chris Pook, refused to comment until after the race.[2] Grid-wise, there were no changes before the race.

The race got under way with Rosberg immediately passing Arnoux off the line (sliding into the Frenchman through the torque of the Cosworth engine), before attempting to take Tambay later in the lap.[1] Arnoux, meanwhile fell to fifth over the remainder of the lap, while Riccardo Patrese jumped to sixth off the line.[1] By the second lap, however, Rosberg had a spin (fortunate not to tap the wall) and fell behind his team mate Jacques Laffite.[1] It was not long, however, before Rosberg was back up to second.[1]

Derek Warwick was the first of the leaders to fall, a spin causing too much damage to the cooling system of the Hart engined Toleman.[3] At the front, meanwhile, Rosberg was all over the back of Tambay, the Williams not suffering from the turbo lag that plagued the Ferrari.[3] Behind them, Jean-Pierre Jarier had climbed into the top six, taking Patrese quickly.[3] Jarier then locked up going into the next corner, sliding into the front of Michele Alboreto, causing Alboreto to pit and allowing Patrese into fourth.[3]

The battle for the lead was then decided by Rosberg, who had a forced his way up the inside of Tambay going into the hairpin.[3] Rosberg slammed on the brakes in an attempt to make the corner, although Tambay drove across the front of the Finn, launching the Ferrari into the air.[3] Tambay retired there and then, with Rosberg seemingly unaffected, until he pulled off with suspension damage.[3] The lead was handed to Laffite, although the initative was with the charging McLarens.[3]

Although they had qualified 22nd and 23rd, and shod with Michelin tyres, Niki Lauda and John Watson had worked together to get into the points, and by the time of the Tambay/Rosberg incident were only 20 seconds behind.[2] Lauda had got the better start and led the pair through the field, until Watson used his skill in overtaking to take his Austrian team mate on lap 33.[3] Lauda then stuck onto the wing of Watson, as they drew in the leaders.[1] On lap 44, Watson and Lauda both slid past Patrese at the hairpin, and then were on the back of Laffite.[1] A feint by Watson gave him the lead on the 45th lap at the hairpin, with Lauda soon battling past the Williams for second.[1]

Watson and Lauda streaked away at the front, as Laffite fell away, falling behind Patrese soon after.[3] Eddie Cheever and Arnoux had an exciting duel for a time, with Cheever giving room to Arnoux when needed.[3] The pair came across the slowing Laffite, with Arnoux using the tow of both cars to take fourth, with Cheever also getting past the Williams for sixth.[1] Cheever then gave Arnoux a taste of his own medicine by taking fourth from the Ferrari, before again defending from the Ferrari.[3]

Cheever then suffered a gear box failure just 7 laps from the end, while Patrese developed a fault on his distributor, costing him a significant amount of time each lap.[1] Their demise (although Patrese continued) promoted Laffite back to fourth, Marc Surer (whose team mate Jones retired with fatigue on lap 59) into fifth and the young Venezuelan Johnny Cecotto into sixth.[3] At the front, however, Watson proved unstoppable, taking his fifth and final victory ahead of Lauda and Arnoux.[1]

* Cheever retired but was still classified for completing more the 90% of the race distance.

Retrieved from "https://f1.fandom.com/wiki/1983_United_States_Grand_Prix_West?oldid=89123"
Community content is available under CC-BY-SA unless otherwise noted.