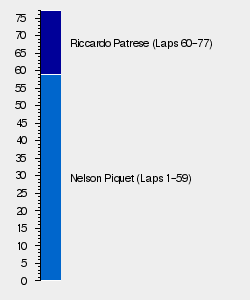 The 1983 South African Grand Prix was the final round of the 1983 Formula One World Championship, held at Kyalami in Gauteng, South Africa.[1] The race saw the championship decided in favour of Nelson Piquet, after a three way duel between himself, Alain Prost and René Arnoux.[2] Piquet actually finished the race in third, although the points awarded to him were enough to get him ahead of Prost in the final standings, after the Renault driver retired with a turbo failure.[2]

The seventeenth running of the South African Grand Prix saw Riccardo Patrese take his second career victory, although he was under pressure from Alfa Romeo's Andrea de Cesaris in the closing stages.[2] De Cesaris claimed second in the race, with Ferrari taking the Constructor's title despite failing to take a point in the race.[2]

Theodore Racing pulled out of Formula One following the European Grand Prix three weeks earlier.[2] Otherwise, the field was unchanged, although Williams dropped (as planned) the third car they ran for Jonathan Palmer at Brands Hatch, while also debuting the FW09 for Keke Rosberg and Jacques Laffite.[2] The Williams-Honda partnership now meant that nine of the entrants in South Africa were using turbo charged engines. Spirit Racing were also absent, after Honda began questioning the feasibility of supplying two teams in the Championship in 1984.

The Championship battle was the centre of attention, however, as the F1 circus entered Kyalami, with the title battle down to three drivers. Alain Prost brought a two point lead with him in the fast, but unreliable Renault RE40, with Nelson Piquet in second in the BMW powered Brabham BT52B. The third man in the battle was René Arnoux, whom was in possession of the reliable Ferrari 126C3, although the gap of eight points to Prost meant Arnoux had to win, with his former team mate failing to score, and Piquet no higher than fifth.

Ferrari's reliability meant that they led the Constructor's Championship by eleven points, with only fifteen still available. Renault sat in second, really requiring the Scuderia to fail to score, with Prost and Eddie Cheever both on the podium (including either of them winning the race). Furtherdown, Brabham had already secured third, with a battle between, arguably, the two biggest British teams Williams and McLaren for fourth. Williams held a two point advantage, although their gamble on largely unproven Honda engines in the final round could cost them their two point advantage.

The full entry list for the 1983 South African Grand Prix is shown below:

Ferrari were the team to beat in practice, with Patrick Tambay (in his last race for the tifosi) fastest from Arnoux, although it was not a trouble free session for the championship outsider.[2] After breaking down during the session, Arnoux was run over by his own car as the marshalls removed it from the track, meaning he would have to hobble his way around the circuit.[2]

It would be advantage Piquet after qualifying, with the Brabham backed Brazilian taking second on his time from practice.[1] Arnoux improved, but his injured foot meant he couldn't push as hard as he could, slipping to fourth behind Piquet's team mate Riccardo Patrese.[1] Prost, meanwhile, would have to start from fifth, having been unable to improve on his practice time, meaning he would have to battle his way to Piquet to take the title.[1]

Keke Rosberg was in a visibly happier position in the new Williams-Honda in sixth, with team mate Jacques Laffite ending his recent poor qualifying run in tenth.[1] WIth the departure of Theodore reducing the entry list to twenty six cars, all of the drivers would start the race, with the Osellas of Carrado Fabi and Piercarlo Ghinzani sharing the thirteenth and final row.[1]

With no changes to the grid order before the race, the entire focus of the grid was on the title battle, with Nelson Piquet best placed on the grid. Alain Prost had to stay within a position of Piquet or get in front to win the Championship, while René Arnoux had to win outright, and see Prost and Piquet (idealy) fail to score at all. Ferrari, meanwhile, were almost guaranteed the Constructor's title, with Renault needing both of their cars on the podium, and the tifosi to fail to score.

A poor start for Patrick Tambay on pole allowed Piquet and rear gunner Riccardo Patrese into first and second off the line, with Piquet immediately building a lead.[2] Tambay ran in third, with a remarkable start for Andrea de Cesaris putting the Alfa Romeo up to fourth.[2] Prost beat Arnoux off the line to hold on to fifth, with the McLaren-TAGs taking on the Williams-Hondas further down.[2]

Over the first few laps, Piquet built a significant lead, as Tambay came under pressure from both de Cesaris and Prost, ultimately falling to both of them in the space of a couple of laps.[2] De Cesaris then fended off Prost, while Niki Lauda climbed through the field to take Tambay and sit on the back of Prost.[2] Furtherdown, Arnoux's championship hopes were ended on lap ten after an engine failure, leaving the title fight between Piquet and Prost.[1] back at the front, Prost and Lauda both forced their way past de Cesaris, before, on lap 18, the Austrian slipped into third, beating Prost along the main straight.[2]

The pitstop window opened on lap 28, when Piquet stopped and rejoined without losing the lead, a low fuel start amost certainly the reason why he had built that lead as much as he had.[2] A few laps later, however, there was a potentially decisive development in the title battle, when Prost stopped on lap 35 in the pits.[2] The Frenchman climbed out of his car after a turbo failure, meaning Piquet had only to finish fifth in order to claim the title.[2] Ferrari, meanwhile, were now Constructor's Champions for the second year in a row, meaning that they could relax for the rest of the race.

The second half of the race saw Piquet adopt a conservative style after Prost's failure, meaning that he was gradually caught by the rest of the field.[2] Patrese was the first to come across him, and was allowed to pass rather unchallenged to take the lead on lap 60.[2] Lauda was next, having established himself in third, taking second on lap 69, although his day was then ruined by an electrical failure five laps from the end.[2] De Cesaris was next to come across the champion-elect, taking second on lap 75.[2]

Patrese won the race from de Cesaris, while Piquet remained unchallenged for third over the final two laps, meaning he took the World Championship by two points from Prost.[2] Derek Warwick had a trouble free run to take three final points for Toleman in fourth, while Keke Rosberg took his first points since the Canadian Grand Prix in fifth.[2] A disappointed Eddie Cheever completed the points paying positions, as Ferrari and Piquet emerged as the Champions of 1983.[2]