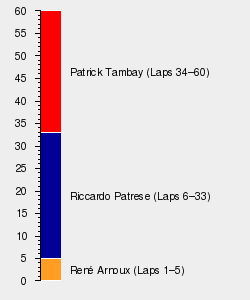 The 1983 San Marino Grand Prix, held at the Autodromo Dino Ferrari, was the fourth race of the 1983 Formula One Season. The paddock arrived two weeks after the French Grand Prix, with Ferrari in a reflective mood after the events of the previous visit the year before.[1] As it was, the tifosi left on a high note, with René Arnoux claiming pole, and Patrick Tambay taking victory, dedicating his win to his predecessor in the number 27 Ferrari: Gilles Villeneuve.[1]

After the near perfect display by Renault in France, Alain Prost was finally in a position that represented his (and the car's) inherent pace, now third in the standings. Yet, the Frenchman still trailed Nelson Piquet, whose tally of fifteen was five more than Niki Lauda's, with the Austrian sitting one point ahead of Prost going into the San Marino weekend. John Watson was level with Prost on points, with McLaren leading the teams' championship through his and Lauda's combined scores. Brabham started the weekend in second, four points behind, with Renault the only other team in double figures (all of which were scored in France).

There was just one casualty among the entry list, with the second RAM dropped meaning Eliseo Salazar was given the full attention of the RAM Racing team.[2] Osella, meanwhile, had negotiated a surprising engine deal with Alfa Romeo, shoehorning in one of Alfa's V12 creations into the back of Piercarlo Ghinzani's car in time for the race weekend.[2]

The full entry list for the 1983 San Marino Grand Prix is shown below:

Ferrari were determined to have a good weekend at Imola, the last track at which they had taken a one-two (courtesy of Didier Pironi and Gilles Villeneuve the year before).[1] Rene Arnoux was the fastest, beating his team mate by a second, with Prost and PIquet the only drivers splitting the Ferraris.[1] Osella ran the Alfa engine for the first time, although Ghinzani was almost two seconds slower than the older, Ford engined car of Corrado Fabi, the extra weight the most likely cause.[1]

With 28 entries, the practice session did not see any cars eliminated, although, as with the rest of the 1983 season, times in practice could count towards a driver's ultimate qualifying position.

It would be an emotional day for the tifosi on the saturday before the race, as René Arnoux claimed his first pole position for the Italian marque, three quarters of a second ahead of team mate Patrick Tambay.[2] Nelson Piquet also impressed, sneaking between the two Ferraris to take second on the grid, with Alain Prost the only other man within a second of his former Renault team mate.[2] Manfred Winkelhock was another highlight of the day, taking the BMW powered ATS to seventh on the grid, only falling behind Riccardo Patrese and Eddie Cheever by a few hundreths of a second.[2] Keke Rosberg was the fastest of the non-turbo cars, although his eleventh place, almost four seconds down on Arnoux, showed that the turbos had a significant advantage in Imola.[2]

John Watson had a poor day, qualifying down in twenty-fourth place, while Osella's Alfa experiment failed as Piercarlo Ghinzani failed to qualify.[2] He joined Eliseo Salazar on the sidelines for the race, with the Chilean lacking the speed to beat Ghinzani's team mate Corrado Fabi in the normal Osella.[1]

With a strong backing from the tifosi, it was clear that the fans around Imola wanted nothing more than a Ferrari win, and with Arnoux on pole and Tambay third, it seemed as if their wish would be granted. Piquet, Prost and Patrese were still in contention, however, and with Rosberg leading the non-turbo charge, Ferrari would have to be at their best to appease the crowd. One further note was to be made of McLaren, and particularly John Watson, as the last time he had failed to qualify in the top twenty (two races earlier at the United States Grand Prix West) the Ulsterman had won, showing a battling nature that he would need in San Marino.

A stall off the line for Piquet gave Arnoux a dream start, as he pulled smartly away from the grid as the pack filtered past the stationary Brabham.[2] It would not be too long, however, before Tambay caught the back of his team mate, dragging Patrese, Prost and Andrea de Cesaris with him.[2] Piquet, meanwhile, got the Brabham back to life, and set about catching the back of the field, while Eddie Cheever became the first to fall with a turbo failure on the second lap.[2]

Piquet's day would be improved by the fact that the Brabham was the dominant car that day, as Patrese demonstrated by taking Tambay and Arnoux on the fifth and sixth laps respectively to take the lead.[2] He quickly established a lead as Piquet began his slow climb, while Watson was gradually making progress, benefitting from several accidents, including the collision between his team mate Niki Lauda and Johnny Cecotto.[2]

By half distance, the Brabhams were beginning to get low on fuel, with Patrese pitting on lap 34.[2] Unfortunately for the Italian, he overshot his pitbox, meaning he emerged behind Tambay after the delay.[2] Tyre degredation had seen Arnoux stop earlier than planned, meaning he had fallen behind his team mate and rival Prost, leaving Tambay and Patrese to duel for the victory. Piquet, meanwhile, emerged from his stop in sixth, although his performance would count for little as an engine failure on the 42nd lap ended his race.[2]

Tambay and Patrese continued to battle away, until Patrese snatched the lead with six laps to go, building a small lead over the Frenchman.[2] Yet, the Italian was pushing far too hard for the state of his tyres, sliding wide at Acque Minerale and into the barriers.[2] The tifosi, in a typical show of loyalty to Ferrari, cheered as the Italian driver slid off as it meant that Tambay would take victory, as well as promote Arnoux into third.[2] Patrese's accident also put Watson into the points.[2]

Six laps later and the No. 27 Ferrari swept across the line to take an emotional victory at Imola, the first for Tambay in 1983.[2] Arnoux could do little to catch his former team mate Prost in the Renault, who split the Ferraris by taking second.[2] Keke Rosberg had a relatively quiet day to take fourth, with the charging McLaren of Watson beating Marc Surer to fifth.[2] Prost's six points for finishing second meant that he took the lead in the championship, with Tambay a point behind in third (Piquet was second, level on points with Prost), while Watson overtook Lauda for fourth.[1]

* Baldi, Mansell and Patrese were still classified, despite retiring, as they had all completed 90% of the race distance.