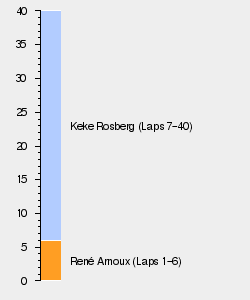 The 1983 Marlboro Race of Champions was a non-championship race, held at Brands Hatch, England, in 1983.[1] Held the week before the French Grand Prix, and staged on the same day as a tyre test a Circuit Paul Ricard, the last non-championship Formula One race to be held was attended by thirteen drivers.[1]

Regardless, Keke Rosberg took an impressive victory in his Williams, narrowly beating the Tyrrell of Danny Sullivan.[1] Alan Jones also took part in the race and claimed third, although he decided to leave F1 again having driven for Arrows in the Race of Champions and in the United States.[1]

Despite being held on the same day as a tyre test, many teams opted to split their cars, so one went to the Race of Champions, while the other completed the test.[1] Some teams, however, decided to employ former drivers for the meeting, with Brian Henton taking over one of the Theodore entries, while Brabham handed Mexican racer Hector Rebaque a drive.[1] Brabham's choice was later criticised by former champion James Hunt, whom believed they should have fielded a British talent in the British race.[1]

The entry list also featured a Swede by the name of Stefan Johansson, driving for the Spirit Racing team.[1] This was the first car built by Spirit, and featured the first turbocharged engine to be built by Honda (whom backed the team).[1] This was seen as a significant step in the engine's development, particularly as Williams were waiting for the engines to be developed for their cars.[1] Team Lotus were another team with development in mind, although it wasNigel Mansell whom they decided to advance, giving him a rare chance in the Renault turbo powered Lotus 93T.[1]

With Rene Arnoux as the only real threat in a turbo charged car at Brands, Keke Rosberg claimed pole position for the Race of Champions, his second in two years at the Kent circuit (having done so at the 1982 British Grand Prix).[1] Arnoux was the closest to him in the Ferrari (just a tenth of a second behind), while Alan Jones pushed the Arrows hard to claim third, ahead of the McLaren of John Watson.[1] Roberto Guerrero was displaced by team mate for the weekend Henton for sixth (with Theodore one of only two teams bringing two cars to the race), with the second Arrows of Chico Serra in eleventh.[1]

Spirit Racing managed to beat RAM in the battle of the newcomers, as Johansson (whom had set a time good enough for third in practice) suffered problems with his new Honda engine.[1] The RAM remained uncompetitive, however, with Jean-Louis Schlesser (making his F1 debut) completing the grid in thirteenth, having failed to set a time (of note) in qualifying.[1]

There were no changes to the grid before the race, with Spirit Racing hoping to simply complete the race distance. Arnoux had suffred with tyre wear in both practice and qualifying (escaping from a potential crash after a tyre failure in practice), so his challenge looked set to be hampered by numerous pitstops. The question was, however, if he could use the extra power of the turbo to build a big enough lead over Rosberg to take victory.

The start was relatively even, with the only change coming when Danny Sulllivan received a helpful tap into Paddock Hill Bend, meaning he took both Jones and Watson on the outside of the sweeping corner.[1] Arnoux used his extra power to blast past the Finn through Pilgrim's drop, although it soon became clear that the Ferrari was eating it's tyres.[1] Athough blessed with more power, the Frenchman was unable to pull away.[1]

Another mover was Stefan Johansson, whom demonstrated the potential power of the Japanese engine by taking four cars on the opening lap.[1] Yet, the Honda engine, while strong, was still brand new, so, as the Swede chased down Hector Rebaque into Dingle Dell on the fifth lap, the smoke of failure erupted from the back of the Spirit.[1] Two laps later, Nigel Mansell (after a quiet start) joined him on the retirement list, handling issues causing the Brit some troubles he could not overcome.[1]

With Watson and Rebaque soon falling to individual issues as the race approached half way, the battle for the lead began to disappear, as Arnoux (having already stopped on lap seven), pitted twice in the space of ten laps for tyres.[1] Although the Ferrari was unprecedentedly quick, Arnoux was destroying his tyres so fast that Ferrari ran out on the 23rd lap, forcing the Frenchman into retirement.[1] By this stage, Rosberg had also begun to suffer from tyre wear, allowing Sullivan to slowly catch up to the back of the Williams over the remaining laps.[1]

It seemed only a matter of time before the American pushed the Tyrrell (on softer but 'scrubbed' tyres) past the Finn, as Sullivan shadowed Rosberg for the final ten laps.[1] Through the final lap, Sullivan and Rosberg ran virtually side-by-side, although the canny Finn was able to place his car in just the right spot to prevent Sullivan taking victory.[1] Across the line, Rosberg held on by less than four tenths of a second, with Alan Jones (having a quiet day) nearly thirty seconds behind.[1]

Despite what was perceived as a classic race, the world of Formula One had moved on from one-off trophy races, with the championship becoming the main feature.[1] As such, the 1983 Race of Champions remains the last non-championship race to be held in F1 history.[1]

* Both drivers were also retired due to lack of tyres as well.

Retrieved from "https://f1.fandom.com/wiki/1983_Race_of_Champions?oldid=83753"
Community content is available under CC-BY-SA unless otherwise noted.