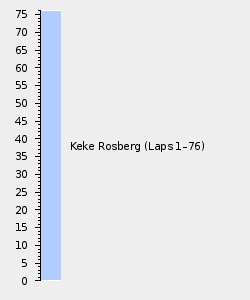 The 1983 Monaco Grand Prix served as the fifth meeting of the 1983 Formula One Season, with the city of Monte Carlo hosting the race.[1] A wet start to proceedings caused several teams to opt for wet tyres, with Williams the only major team to bolt a set of slicks to their cars.[2] The gamble paid off, as Keke Rosberg claimed victory, ahead of Nelson Piquet and an improving Alain Prost.[2]

Rosberg's win is also notable for the fact that his son, Nico, went on to take the 2013 Monaco Grand Prix victory at the same circuit thirty years later.[1] This feat meant that they were the first father and son duo to win the Monaco Grand Prix.[1]

The grid remained unchanged from the San Marino Grand Prix two weeks earlier, with 28 cars entering the race.[2] However, due to the restrictive nature of the circuit, the organisers decided to limit the number of grid places to 20, and so it would be a battle to see whom could survive the bigger elimination section.[2] The only change on the development front was at McLaren, whom brought an updated set of Cosworth DFY engines to the principality, hoping to close the gap to the turbo field.[2]

In the 1983 World Championship, the standings were notably in favour of Alain Prost, whom, despite being tied on 15 points with Nelson Piquet, was getting the results to match his pace in the Renault. Patrick Tambay's win at Imola meant he sat a point behind them in third, while John Watson and Niki Lauda were one point apart in fourth and fifth respectively. Ferrari sat atop the Constructor's table, although McLaren were just a point behind with Renault closing the gap. Brabham and Williams completed the top five in the table.

The full entry list for the 1983 Monaco Grand Prix is shown below:

Because of the reduced grid capacity, practice served as an elimination session to reduce the field to 26 cars for the full qualifying session.[2] As it turned out, the two Theodores were not running too well, with both Johnny Cecotto and Roberto Guerrero failing to set a time.[1] Otherwise, the session ran smoothly, with Alain Prost setting the fastest lap of the day, as expected.[2]

The main qualifying session itself was meant to reduce the field from 26 down to 20.[2] However, Saturday saw a down pour, meaning that no one could improve their times from practice, and hence meant that Prost was on pole, with former team mate Rene Arnoux lining up alongside.[2] Eddie Cheever beat the second Ferrari of Patrick Tambay, while Keke Rosberg had secured fifth and was the best of the non-turbo cars.[2]

But the biggest story was further down, in the eliminated section of the session. McLaren had struggled in the Thursday practice session with their Michelin tyres, with Niki Lauda in 22nd and John Watson 23rd.[2] A strong Saturday was needed for them to avoid elimination, but the rain prevented them from improving, meaning both McLarens were eliminated for the first time in a qualifying session.[2] They were joined on the side lines by the Osellas of Corrado Fabi and Piercarlo Ghinzani (whom was slower than his team mate despite the V12 Alfa Romeo engine in his car), Eliseo Salazar in the RAM, and Bruno Giacomelli in the second Toleman.[2]

The morning before the race saw heavy rain, although as the start time approached, the circuit was beginning to dry up.[1] Most teams, including Brabham, Ferrari and Renault, opted to play it safe and fit wet tyres to their cars.[1] Only the Williams cars of Keke Rosberg and Jacques Laffite, and the Toleman of Derek Warwick, were fitted with slicks on for the start, meaning it would be hero or zero for the reigning World Champion on the opening lap.[2]

As it turned out, that trio made the correct choice, as Rosberg leapt from fifth to second off the line, and soon slid his way past Prost on the second lap.[2] It was a clean get away throughout the field, until Nigel Mansell and Michele Alboreto came together at the Swimming Pool before the end of the first lap.[2] A further accident claimed Manfred Winkelhock and Raul Boesel on the third lap, as the slick shod cars began to take the initative.[2]

By lap seven, the minds of the wet tyred teams were made up, with a mass exodus into the pits to change.[2] Only Rosberg, Laffite, Marc Surer and Warwick stayed out (Arnoux came into the pits to retire after hitting the wall on lap six).[2] Rosberg pulled well ahead of his team mate, whom established a gap over Surer and Warwick as they battled for third.[2] The order would remain unchanged, however, as Nelson Piquet and Prost (who both somehow managed to stay on the lead lap) led the charge back up to the front.[2]

By lap 49, Piquet had caught the back of Warwick, whom was becoming increasingly frustrated in his attempts to get past Surer.[2] Coming into Sainte Devote, Warwick attempted to get inside of the Arrows, although had nowhere to go when Surer closed the door into the corner.[2] Surer hit the wall and was out, with Warwick limping back to the pits to retire, leaving Piquet with a clean run to the back of Laffite.[2]

Piquet was then gifted second a few laps later, as Laffite suffered a gearbox failure, which also meant that Prost was promoted to third.[2] The order remained unchanged until the end, with Patrick Tambay the only other man to stay on the lead lap, finishing fourth.[2] Danny Sullivan and Mauro Baldi claimed the remaining points, although they were both two laps down, as was the only other finisher, Chico Serra.[2]

Retrieved from "https://f1.fandom.com/wiki/1983_Monaco_Grand_Prix?oldid=84081"
Community content is available under CC-BY-SA unless otherwise noted.