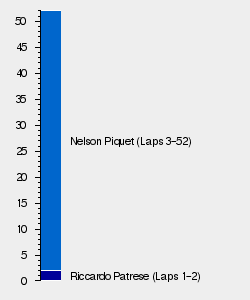 The LIV Gran Premio d'Italia, better known as the 1983 Italian Grand Prix, was the thirteenth round of the 1983 Formula One World Championship.[1] After Riccardo Patrese qualified on pole position for his home race at Monza, his team mate Nelson Piquet won to close the gap to Alain Prost in the championship to five points.[1] René Arnoux finished second and retained second in the Championship, with Eddie Cheever completing the podium for Renault after Prost retired with a turbo failure.[2]

A fortnight had passed between the Dutch and Italian Grand Prix, allowing several teams to test various pieces of equipment.[2] Williams launched the FW09, featuring a Honda engine in a test at Donington Park, although it was not race ready in time for the Italian scrap.[2] McLaren, meanwhile, completed their second TAG turbo car for John Watson, with both their drivers now running turbos (and the first time that McLaren had not used a Cosworth DFV engine in either of their cars since 1968).[2] BMW, meanwhile, had been experimenting with different fuel mixtures, resulting in a power boost for Brabham, as Nelson Piquet pushed for the championship.[2]

There were no changes to the entry list as the field headed to Monza, one of Formula One's fortresses of popularity, particularly for those backed by a certain Italian manufacturer. With René Arnoux taking victory in the Netherlands, the Frenchman was now eight points behind Alain Prost in the title battle, while Patrick Tambay remained in the title battle, tied with Piquet fourteen behind. The tifosi sensed a Ferrari title on their hands, and arrived with the usual passion they displayed at every Italian Grand Prix.

The one-two in Holland also meant that Ferrari were on the march in the Constructor's Championship, with a twelve point lead now held over Renault. Brabham had held onto third at Zandvoort, despite a double retirement, but were now under pressure from Williams and McLaren for that spot, particularly now that both were close to running a successful turbo campaign.

The full entry list for the 1983 Italian Grand Prix is shown below:

The extra boost fromBMW  meant that Brabham dominated practice, with Nelson Piquet setting the fastest time from Riccardo Patrese, beating both Ferraris.[1] John Watson, meanwhile, struggled to get to grips with the new TAG engine, only able to get within two seconds of his team mate Niki Lauda (whom had already used the engine at Zandvoort).[1] That said, the McLaren duo were two of only four cars (the others being the Brabham boys) to break the 300 km/h barrier in the practice session, showing the potential power available to them.[1]

Qualifying turned into a pole position for Riccardo Patrese, with Nelson Piquet dropping to fourth as he was unable to improve on his practice time.[1] Patrick Tambay took second for Ferrari, beating team mate René Arnoux by a few tenths, with Alain Prost a second off the top four in fifth.[1] John Watson found more pace from his new TAG engine, taking fifteenth, as Keke Rosberg claimed the honour of being the fastest non-turbo car in sixteenth, six seconds slower than Piquet.[1]

Out of qualifying went Kenny Acheson, Raul Boesel and, rather surprisingly, Jacques Laffite for Williams as three of the 29 entrants dropped as usual.[1] All three just missed out on qualifying, however, with Acheson in 29th just two tenths behind Johnny Cecotto in 26th, with 8.150 seconds covering the field in Monza.[1]

With no changes to the grid before the race, expectation for Italian success was high.[2] 1983 was a bumper year for Italian drivers, with almost a third of the grid racing under an Italian tricolor as well as the fact that three teams were registered in the southern European nation. Yet only one of these teams was allowed to be successful, and, as it turned out, the tifosi wanted one of Ferrari's Frenchmen to win rather than any of the Italian drivers. In a familiar display of loyalty, objects were thrown in the direction of anyone not driving a scarlet car before the start.[3]

Off the line, Riccardo Patrese got away well, immediately moving to the inside of the track to defend from the Ferrari duo of Patrick Tambay and René Arnoux.[2] Unfortunately for them, one other car got a good start, as Nelson Piquet shot around them off the line and into second, hoping to be let past his team mate in view of the championship.[2] There were no incidents of note further down the order on the first lap, as the field got off the line in what was a relatively tame start.[2]

Lap three, however, changed the complexion of the race with two incidents of note.[3] The first happened at the first chicane, as Andrea de Cesaris, in a group that included Tambay, Alain Prost and Eddie Cheever, was spun into the gravel, although it was difficult to see if he was aided in his retirement by those around him.[3] Then, as Patrese and Piquet came up to the Parabolica, the Italian driver suffered an engine failure, causing a huge cheer from the Italian fans as Arnoux and Tambay were promoted to second and third.[3]

Piquet quickly established a lead from the No.28 Ferrari as the race went on, while changes were coming thick and fast further down.[3] Elio de Angelis had battled well in the opening phases of the race, and was now in sixth as Cheever battled past Prost for fourth.[3] It soon emerged that Prost was carrying a problem, as de Angelis caught and passed the Frenchman on the main straight, before setting off after Cheever and Tambay.[3] Cheever then took Tambay later on the same lap, before de Angelis slid his way past the second Ferrari at the second chicane on the next.[3] Their battles would continue until the pitstop window opened.

Arnoux was the first of the leaders to stop on lap 24, as Piquet continued to blast around Monza. The Brazilian soon came up to the back of a familiar car, lapping a Renault going into the Ascari chicane.[3] The Renault in question was that of Prost, whom had lost pace dramatically since de Angelis had got past him, and was now in serious trouble.[3] A turbo failure ultimately ended his day, while Arnoux and Piquet continued in the race, looking set to eat into his championship lead.[3]

It would not be that smooth a day for those two either, however, as Cheever looked racey in the second Renault.[3] The American racer put huge pressure on Arnoux after his stop, trying several times to get past the Ferrari, allowing Piquet to establish as bigger lead.[3] Yet, the Brabham team were having problems from outside influences as well, and at the time when Piquet was due to stop too.[3] Niki Lauda stalled as he came out of the McLaren box, and was now stopped in the pitlane outside the Brabham box, blocking the exit for Piquet.[3] In desperation to clear the pitlane, several Brabham personel, including a certain Bernie Ecclestone, gave Lauda a push to get him going, as Piquet entered the pitlane.[3] Fortunately for them, Lauda got under way in time, and a flawless stop for Piquet meant he retained his lead.[3]

The second half of the race was far tamer, with the only changes to the order coming through retirements.[3] Piquet took victory unchallenged, while Arnoux claimed second with Cheever in close attendence throughout.[3] Tambay had got past de Angelis at the stops and held on to fourth from the Team Lotus Italian, while Derek Warwick claimed more well earned points for Toleman in sixth.[3]

Alain Prost's recent run of retirements had now resulted in a dramatic change in the Driver's Championship, as his lead of fourteen leaving Austria was now down to two. René Arnoux had closed the gap massively through a first and a second in Holland and Italy, and was now favourite to take the title. Nelson Piquet's victory meant he also closed the gap, with the former World Champion now five behind with eighteen available, while Patrick Tambay remained in mathematical contention, although he required an eleven point swing in his favour to win.

Ferrari now had command in the Constructor's Championship, with a seventeen point lead over Renault upon leaving Italy. Brabham took a big step to taking third in the championship through Piquet's victory, with Williams and McLaren failed to score again. Toleman, meanwhile, were making huge steps in the lower reaches of the championship, climbing up the table through recent form.