Formula 1 Wiki
Register
Don't have an account?
Sign In
Advertisement
in: 1983 Grands Prix, European Grand Prix, Formula One races in the United Kingdom 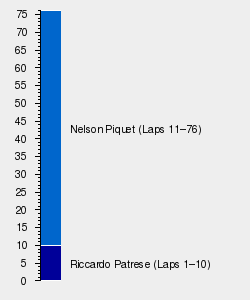 Elio de Angelis took pole position for the first time in his career for Team Lotus in qualifying, but was denied a chance to fight for victory after a spin.[2] The race itself went to Nelson Piquet, whom won from title rival Alain Prost with Nigel Mansell taking a popular podium at a circuit that would later define his career.[2] Piquet and Prost were separated by two points after the race, meaning the title would be decided between them at the final race of the season in South Africa.[2]

In the two weeks since Italy, the futures of several drivers were in doubt. Chief amongst them was Patrick Tambay, whose career at Ferrari had already looked to be on shakey ground despite his popularity with the tifosi.[2] It therefore came as no surprise that the Italian team announced he would be leaving them at the end of the season, with (perhaps more surprisingly) Michele Alboreto replacing him.[2] Tambay was later linked with a move to Renault after Eddie Cheever's future was questioned at the French manufacturer.[2] Also looking for a new drive was Johnny Cecotto, who was forced out of Theodore with the team in a desperate situation.[2] Following the departure of major investor Morris Nunn, Theodore were now down to running a single car, with their immediate future in serious doubt.[2]

Yet there was some positive news to emerge in the two week break, with Williams the main focus.[2] Their new Honda equipped FW09s were now ready to be used in a full race weekend, but the team opted to delay their launch until the South African Grand Prix to reward one member of their team.[2] Jonathan Palmer had been a Williams test driver, and had also been key to bringing Honda to the team (being as he was, a Honda backed racing driver), and had helped developed both the FW08 and new FW09.[2] Sir Frank Williams therefore saw it fit to hand Palmer his debut in a third Williams car, at the circuit that Palmer would later own, in a one-off appearance.[2]

Championship-wise, Brands Hatch welcomed three potential claimants to the title for the European Grand Prix.[2] Alain Prost, René Arnoux and Nelson Piquet were separated by five points with a maximum eighteen left to claim, with Tambay still in mathematical contention (although requiring a huge swing of fortune to have a realistic chance of glory). In the Constructor's Championship it was a straight fight between Ferrari and Renault for the honours, although one that was weighed heavily in Ferrari's favour, sitting nineteen points ahead coming to Kent.

The full entry list for the 1983 European Grand Prix is shown below:

Keke Rosberg may have beaten the turbo cars at the Race of Champions earlier in the year at Brands Hatch, but it was clear that he was going to struggle just five months later. Turbo power claimed every position down to fourteenth around the Kent circuit, with Rosberg the only non-turbo driver to set a time under 1:15.000.[1] It was also clear that Team Lotus' 94T was the class of the field, with Elio de Angelis and Nigel Mansell topping the times in practice, with Nelson Piquet the only man within a second of them.[1]

The impact of the new regulations introduced at the start of the season told quite clearly at Brands Hatch, the first time all season that it was highlighted.[1] De Angelis' time from practice (where he was the only man in the 1:12.000s) was bettered by himself in qualifying, meaning the Italian took his first career pole position, although he was 2.8 seconds slower than the time set by Keke Rosberg at the 1982 British Grand Prix.[1] Riccardo Patrese split the two Lotuses in second after a stunning lap, with Nelson Piquet and René Arnoux in close company in fourth and fifth.[1] Alain Prost, meanwhile, would start from eighth.[1]

Rosberg himself, meanwhile, remained the fastest of the non-turbo cars, but dropped to sixteenth after an improvement for Niki Lauda and Bruno Giacomelli.[1] Out of qualifying went Kenny Acheson, Jacques Laffite and Corrado Fabi after the withdrawal of Johnny Cecotto during practice.[1] This meant that Jonathan Palmer qualified on his debut, although he would have to start from a lowly 25th, sharing the last row with freshly announced Ferrari flyer Michele Alboreto .[1]

The full qualifying results for the 1983 European Grand Prix are outlined below:

With no changes to the grid before the race, attention was focused on the title battle, with Arnoux and Piquet starting above Prost on the grid. There were also strong hopes of a British victory, with Nigel Mansell in a quick car and John Watson and Derek Warwick also high up in the starting order. Time would tell, however, as teh cars lined up for the first official European Grand Prix.

A flying start by Riccardo Patrese saw him grab the lead from Elio de Angelis off the line, with Mansell fending off Piquet and Eddie Cheever, Arnoux having slipped down the order.[2] Furtherdown, the toll of the start proved too much for Jean-Pierre Jarier's Ligier, with the gearbox on the Frenchman's car failing shortly after the start.[2] Otherwise, there were no issues at the start.[2]

Piquet needed points if he was to haul in Prost's lead in the championship, and a quick move on the second lap put him past Mansell and into third.[2] Prost, meanwhile, battled away in the lower reaches of the top ten, before a change in pace saw him catch his team mate Cheever in fifth.[2] Cheever was soon past Mansell, with Prost following in short order, before taking his American team mate for fourth on the nineth lap.[2] Piquet responded by closing the gap to Patrese and de Angelis, with his burst of pace now causing other drivers problems.[2]

Under increasing pressure from the looming Piquet, de Angelis stepped up his attempts to get past Patrese, with the pair going nose to tail through much of the eleventh lap.[2] Then, on the thirteenth lap, de Angelis tried to pass on the inside of Surtees, before realising that the space simply was not there.[4] Having stamped on the brakes, de Angelis' car threw itself into a spin, causing the Italian to hit his compatriot in the rear, putting Patrese into a spin as well.[4] De Angelis sustained an engine/oil issue and could not get going again, but Patrese continued having lost a fair amount of time.[2]

Piquet promptly picked up the lead, with Patrese recovering in time to block Prost from taking second.[2] The order then stabilised until the stops, with Cheever hitting problems and dropping back, while Arnoux suffered from a general lack of pace. Piquet still led Patrese and Prost at the front after the stops, but now Patrick Tambay sat in fourth, followed by Mansell, a rejuvinated John Watson, Andrea de Cesaris and the two Tolemans.[2]

Patrese, however, was suffering (presumably from damage sustained from his accident with de Angelis), and soon fell to Prost and the group led by Tambay.[2] Furtherdown, the popular Keke Rosberg, at a circuit he usually enjoyed, retired with an engine failure on lap 43, after Watson had fallen to an accident all of his own making. Back at the front, meanwhile, the order remained unchanged, until Tambay retired with a brake failure, promoting Mansell into third, and Warwick into fifth.[2]

The race finished a few laps later with Piquet taking victory from Prost and the popular Mansell, with de Cesaris, Warwick and Bruno Giacomelli completing the points.[2] It was a significant day in the history of Toleman, as Warwick and Giacomelli both scored points in the same race, a feat that the team achieved for the first (and what ended up as the only) time.[1]

The full results for the 1983 European Grand Prix are outlined below:

Alain Prost left Europe with his lead still intact in the World Championship, but it was Nelson Piquet whom had momentum, now just two points behind going to the final race. René Arnoux sat in third, and had an outside chance of the title sitting eight behind, although he would idealy need Prost and Piquet to retire even if he won the South African Grand Prix. Patrick Tambay was to finish the year in fourth, proving to be a reliable servant to Ferrari through the season, with Michele Alboreto, his replacement, down in twelfth with a quarter of Tambay's total.

The Constructor's title would also go down to South Africa, as Renault closed Ferrari's lead down to eleven points, with fifteen available. In truth, Renault could only take the title if Ferrari failed to score, and Prost and Cheever both finished on the podium (with one of them winning the race). Brabham were set to finish the season in third, while McLaren and Williams would have to battle it out with their new turbo engines at the Kyalami circuit for fourth.