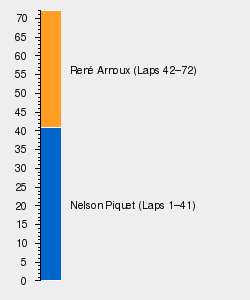 The 1983 Dutch Grand Prix was the twelfth race of the 1983 Formula One Season, held at Zandvoort in the Netherlands.[1] Having qualified on pole, Nelson Piquet was put out of the race by championship leader Alain Prost in a clumsy move on the 42nd lap, allowed René Arnoux and Patrick Tambay to take a one-two for Ferrari.[1] John Watson claimed the last non-turbo podium until the 1988 Canadian Grand Prix, and one which also be his last visit to the rostrum in his career.[2]

Two weeks between the Austrian and Dutch Grand Prix saw numerous stories emerge off the track.[1] Alain Prost was tipped to be moving from Renault and joining Ferrari , linking up once again with René Arnoux despite their falling out in 1982.[1] Williams, meanwhile, confirmed that Keke Rosberg and Jacques Laffite would be driving for them in 1984, although news of their Honda engine was yet to surface.[1]

The biggest news, and a piece that would affect the Dutch Grand Prix, came from McLaren, however, as they lauched their new MP4/1E chassis.[1] This was an important step for the British team, as it meant that they would be using the TAG-Porsche engine in a race for the first time, with Niki Lauda chosen to drive the new car at Zandvoort.[1] Their expectations were limited, however, as the team looked to see that the engine would last the race rather than score meaningful points (although they could but hope).[1]

Prost, meanwhile, brought a fourteen point lead with him in the Championship over Nelson Piquet, with the Brazilian three ahead of Arnoux. Patrick Tambay was a further three behind, maintaining an outside chance of the title, with Rosberg now considered to be out of the title hunt, despite still having a mathematical chance. Ferrari and Renault continued their battle in the Constructor's Championship, with the Frenchmen three ahead of the Italians coming to Zandvoort. Brabham were next, but were now unlikely to take the title, and were now in a battle with Williams, and McLaren, to hold on to third.

The full entry list for the 1983 Dutch Grand Prix is shown below:

Practice showed that the turbo was to be in fine form around the sand dunes at Zandvoort, as the fastest thirteen cars all had the help of turbo power.[3] Particularly impressive were the Team Lotus cars of Elio de Angelis and Nigel Mansell, both of whom got into the top five with their Renault engines.[3] The TAG turbo set the fifteenth fastest time, with Niki Lauda a second quicker than team mate John Watson (using the Ford Cosworth DFV engine as usual), as no non-turbo car managed to set a time under 1:20.000 in practice.[3]

It had been five straight pole positions for Ferrari coming into the Netherlands, but Saturday in Zandvoort belonged to Nelson Piquet, whose time of 1:15.630 saw him take pole position from title rival Patrick Tambay.[1] Elio de Angelis dropped to third after being fastest in practice, beating Alain Prost and team mate Nigel Mansell in the Renault powered battle.[1] René Arnoux was left in tenth, a second off team mate Tambay's pace, while Marc Surer claimed the honour of being the fastest non-turbo car, qualifying in fourteenth.[1]

Niki Lauda took nineteenth in the TAG powered McLaren, and was therefore beaten by the Ford Cosworthpowered McLaren of team mate John Watson (fifteenth).[1] Out of qualifying went Piercarlo Ghinzani in the second Osella, Johnny Cecotto in the second Theodore, and Kenny Acheson in the RAM, with seven and a half seconds covering first to 29th in qualifying.[1]

After qualifying, it was reported that Arnoux had been suffering from engine issues, although Ferrari opted not to change it before the race.[1] As such, the grid order remained unchanged, with Nelson Piquet hoping to close the gap to Alain Prost in the championship.

A stunted start for Patrick Tambay gave Piquet an immediate advantage to take the lead off the line, with Eddie Cheever (through a combination of timing and Tambay's bunching) flying into second from eleventh.[1] Prost climbed into third, with the second Brabham of Riccardo Patrese leading Andrea de Cesaris in the lead Alfa Romeo.[1] Elio de Angelis and Nigel Mansell got their wheels together at several points off the line, with the two Lotus 94Ts tumbling down the order, while Tambay registered in a distant 21st place at the end of the first lap.[1]

An opportunistic move by Patrese saw him take third from Prost early on, before taking the second placed Renault of Cheever on lap 8.[1] De Cesaris had dropped out with engine failure on the sixth lap, much to the Italian's disappointment, which meant Arnoux was now on the tail of Prost.[1] A quick exchange of moves saw Arnoux sieze the advantage going into the hairpin, with the former Renault driver sweeping past the Championship leader and setting off after Cheever.[1]

The TAG engined McLaren of Niki Lauda, meanwhile, opted to have a brake failure on lap 25, ending a race which looked set to end in the tail end of the points, while John Watson and Tambay were making large steps through the field as the pitstop window approached.[1] Back at the front of the field, and Arnoux was now challenging Cheever for third, taking the Renault at the same place as he took Prost, before quickly drawing onto the back of Patrese.[1] On lap 22, Arnoux battled his way past the Italian, taking second as the pitstops came closer.[1]

The stops began on lap 38, after Patrese had fallen to Cheever on increasingly worn tyres.[1] Piquet had a flawless stop to emerge in the lead, although he was under pressure as Prost emerged in second, just behind the Brabham after traffic and the usual pitstop chaos.[1] On lap 42, however, Prost made an error that ended both of their races.[1] In the run up to Tarzan, Prost got to the inside of Piquet, braking as hard as he could on the dirt, causing him to slide.[1] With nowhere to go, and having braked too late, Prost slammed into the Brabham, putting the innocent Piquet out of the race, with Prost continuing.[1] It was not too long before Prost retired aswell, however, with his front wing folding underneath the car and causing the Frenchman to slide out of the race half a lap later.[1]

In the aftermath of their coming together, Arnoux now led from Patrese, with Tambay and Watson having battled up to third and fourth.[1] Derek Warwick was a distant fifth with Mauro Baldi and Michele Alboreto in relatively close company, although the order would not change until the 70th lap.[1] In what turned into a dismal day for Brabham, Patrese suffered a turbo failure with two laps to go, promoting Tambay to second and Watson to third.[1]

With that, Arnoux and Patrese came home to record the first one-two for Ferrari since the fateful 1982 San Marino Grand Prix, with Watson grabbing what turned out to be his last podium place.[1] Warwick held on to a lonely fourth place for Toleman, with Baldi and Alboreto claiming the final points.[1]

With Alain Prost and Nelson Piquet failing to score, the biggest mover in the table was René Arnoux courtesy of his victory. A nine point swing in his favour meant he jumped ahead of Piquet and was now eight behind his former team mate Prost with three races to go. Patrick Tambay also gained in the title battle, moving level on points with Piquet on 37, with those two remaining fourteen points behind Prost. Keke Rosberg's title defence was now over, requiring three wins without Prost scoring at all.

The one-two for Ferrari was also a significant step in the Constructor's Championship, as the Italian team moved 12 points clear as Renault failed to score any points at all. Brabham held on to third, although they and Williams (both of whom failed to score in the Netherlands) were now underpressure from McLaren in the battle for third, after John Watson's podium closed the now turbo aided team to within two points of the latter.

Retrieved from "https://f1.fandom.com/wiki/1983_Dutch_Grand_Prix?oldid=51861"
Community content is available under CC-BY-SA unless otherwise noted.