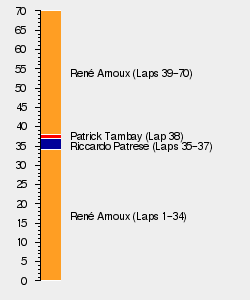 The XXII Grand Prix du Canada was the eighth meeting of the 1983 Formula One Season, hosted in Montreal at a circuit named for the Ferrari fighter whom lost his life over a year ago at Zolder.[1] In tribute to the Canadian hero, the Île Notre-Dame Circuit was renamed the Circuit Gilles Villeneuve, with the words Salut Gilles painted across the start finish line. His brother, Jacques, would also enter the 1983 Canadian Grand Prix for RAM Automotive, although he could not replicate his fallen brother's pace and hence failed to qualify.[2]

The race itself was won by Rene Arnoux for Ferrari, with team mate Patrick Tambay (using the number 27 which Villeneuve had made his own for the tifosi) taking third.[2] Eddie Cheever split the two Ferraris for Renault, while Alain Prost extended his championship lead to three points by taking fifth.[2]

The circuit remained unchanged from a year before, with the death of Riccardo Paletti at the previous year's race seen as an unfortunate accident, rather than an inherent problem at the circuit.[3] The entry list, on the otherhand, had a surprise in store, with RAM returning to the grid despite missing out on Detroit the week before.[2] Although Eliseo Salazar had left, his seat had been filled (for one race only) by Jacques Villeneuve Sr., brother of Gilles and uncle and namesake of the future champion Jacques Jr.[2] No other changes were made to the entry list before the race.

In the championship, Alain Prost held a slender one point lead over Nelson Piquet, having failed to score at all in Detroit. Patrick Tambay still held third, although he was also losing his advantage over his nearest competitor, with Keke Rosberg's second place in the US putting his tally one behind Tambay's, while John Watson, and his McLaren team, remained outside contenders for both championships in fifth. Because Ferrari and Renault had both failed to score in Detroit, Williams were now up to second, just four points behind the French outfit. Brabham had also closed in to the top, coming into Canada four behind the tifosi in fourth.

The full entry list for the 1983 Canadian Grand Prix is shown below:

Dry practice and qualifying sessions allowed the field to cover plenty of distance before the race, a luxury which had been missed at the last four Grand Prix.[1] Jacques Sr. was some way off the pace, two seconds away from the next slowest driver, while Ferrari and Renault proved the potence of turbo power, with the Ferraris in particular the only cars to dip into the 1:28.000s.[1]

A dry qualifying session. with no rain since practice, meant the track improved, meaning the majority set quicker times.[2] Yet, Arnoux still topped the timesheets, with Alain Prost and Nelson Piquet finding enough pace to split the two Ferraris (an issue for Tambay prevented him from setting a competitive time in qualifying).[2] Manfred Winkelhock impressed once again in the ATS, taking seventh ahead of Andrea de Cesaris, while Keke Rosberg claimed ninth (the best of the non-turbo cars).[2]

Back to form, Piercarlo Ghinzani dropped out of qualifying in the V12 Alfa Romeo powered Osella, being beaten by team mate Corrado Fabi by half a second.[1] He was joined by Jacques Sr., whom was half a second off the pace, despite finding almost two over night.[1] This was good news for Mauro Baldi, whom scraped through in 26th, six seconds off of Arnoux's pole time.[1]

The start was delayed for 40 minutes after a power failure causing the timing system to fail.[4] This problem was resolved, however, with the race starting as normal, with no changes to the grid order before the race.[4]

It had been a faultless weekend for René Arnoux so far, and one that was to continue after a perfect start gave the Frenchman a huge advantage into the first corner.[4] Prost slipped into second, while the fast starting Riccardo Patrese leapt from fifth to third, beating PIquet and Patrick Tambay into the first corner.[2] Furtherdown Jean-Pierre Jarier and Marc Surer became the first retirements of the day, neither making it round the first lap with mechanical issues, while Elio de Angelis suffered a throttle linkage failure on the second.[2]

As Arnoux pulled ahead, Patrese dived up the inside of Prost, grabbing second in short order and setting off to try to challenge the Ferrari.[4] Piquet, Tambay and Eddie Cheever remained in touch of the pair, although that would soon change.[2] Piquet suffered a throttle linkage failure while defending from Tambay on lap sixteen, causing him to retire and allowing Tambay and Cheever past.[4] Tambay then picked up a misfire in his Ferrari engine, allowing Cheever to blast past on the straight and catch his team mate.[2]

Luckily for Tambay, the Ferrari engineers had fitted a switch in the cockpit to be used in the event of a vapour lock.[4] The device effectively bled the system automatically, removing the lock and (it was hoped) restoring the engine to full power.[4] Tambay was back up to speed, but the damage to his race had been done, with the Frenchman requiring some luck to get onto the podium.[4]

The race entered a stalemate after the pitstops, with Arnoux only losing the lead to Patrese (whom went further on his fuel and tyres) for three laps until the Italian stopped on lap 38.[2] Then, on lap 56, Patrese pulled into the pits with a gearbox failure, promoting Prost and Cheever into second and third.[4] As the American closed in on his team mate in the closing stages, the championship leader suffered a puncture, putting him into the pits for a late change.[2] Cheever was now second and Tambay, still wounded from the misfire, taking third.[2]

Arnoux, by this stage, was well out of sight and duly crossed the line to take victory by 42 seconds.[2] Cheever and Tambay held station in second and third, while Keke Rosberg claimed fourth, after an epic struggle to get past Andrea de Cesaris cost him a potential podium.[4] Prost glided home in fifth, with John Watson, after another drive from the lower leagues of the grid, claiming the final point in sixth.[2]

Alain Prost extended his championship lead to three points over Nelson Piquet by finishing fifth, but he was still under pressure from behind. Patrick Tambay was now level with Piquet on 27 points, with Keke Rosberg now only five behind on 25. René Arnoux's victory meant he entered the top five for the first time since the United States Grand Prix West, his tally of seventeen one more than that of John Watson.

In the Constructor's struggle, Ferrari and Renault left North America tied on 44 points, with the French outfit deemed ahead through Prost's lead in the Driver's Championship. Williams dropped back to third and were now nine points adrift, with Brabham and McLaren slowly slipping away in fourth and fifth respectively.