Formula 1 Wiki
Register
Don't have an account?
Sign In
Advertisement
in: British Grand Prix, 1983 Grands Prix, Formula One races in the United Kingdom 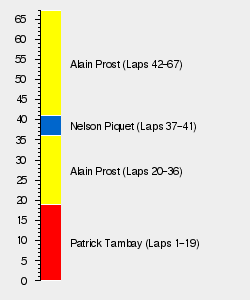 The XXXVI Marlboro British Grand Prix, held at the Silverstone Circuit in Northamptonshire, England, was the ninth race of the 1983 Formula One World Championship.[1] The race saw the debut of Spirit Racing, whom were developing the Honda engine which Williams had pushed the Japanese company to produce for them.[2]

After a one-two for Ferrari in qualifying, Alain Prost took victory for Renault, after he and second placed Nelson Piquet passed the scarlet car of Patrick Tambay during the race.[2] Tambay himself finished third, while Nigel Mansell scored three points by finishing fourth, instantly making a name for himself despite having started in eighteenth at his home race.[2]

In the month between Canada and Britain, several teams had made changes to their cars and personel.[2] At RAM, Kenny Acheson was announced as their new driver, replacing Eliseo Salazar whom had left before the Detroit Grand Prix.[2] The other new(ish) face on the grid was that of Stefan Johansson, whom returned to the championship as the face of the debuting Spirit Racing team.[2] Johansson and Spirit had already appeared at the 1983 Race of Champions earlier in the year, and opted to compete in the British Grand Prix to showcase the Honda engine they had been drafted into developing.[2]

It was not just new faces on the grid either. A pair of freshly built Lotus 94Ts were being held in the Team Lotus stable, with both Elio de Angelis and Nigel Mansell now powered by Renault turbos for the first time.[2] Osella had also been hard at work, building a second Alfa Romeo V12 equipped FA1E for Corrado Fabi, while Alfa Romeo themselves (along with Brabham and Toleman) had modified chassis for their cars.[2] Ferrari were the other team to bring new equipment to the grid, with Patrick Tambay and René Arnoux handed a pair of 126 C3s for the weekend.[2] McLaren were also expected to have made changes, particularly after news emerged of their testing of TAG turbo engines in the break, but arrived with their usual compliment of Ford Cosworth DFVs.[2]

In the championship, Alain Prost was leading the charge from Nelson Piquet and Tambay (the pair tied on 27). Keke Rosberg was sitting five points behind the leader in fourth, while Arnoux had climbed into the top five with victory in Canada. The Constructor's Championship also witnessed a Ferrari/Renault struggle, with the pair tied on 44 points (Renault deemed ahead by virtue of Prost's position in the Driver's battle). Williams had slipped to third, now nine points behind, while McLaren were beginning to fall away after their recent run of poor qualifying performances hampered the results of John Watson and Niki Lauda.

The full entry list for the 1983 British Grand Prix is shown below:

Ferrari were topping the times almost constantly during the practice session, although Renault were on top with Prost setting the fastest time of the day.[1] The work of Gerard Ducarouge was also being appreciated at Team Lotus, with Elio de Angelis on the pace of the leading teams.[1] Corrado Fabi and Kenny Acheson were off the pace, while Stefan Johansson broke in the Spirit Honda, setting times good enough for mid table.[1]

Ferrari siezed the advantage in qualifying, however, with Arnoux taking pole position after finding a second in pace overnight. Tambay joined him on the front row, with Prost sharing the second row with the impressive Elio de Angelis.[2] Manfred Winkelhock was another to stand out, taking eighth in the ATS, while Derek Warwick was the best of the Brits, taking tenth at his home race.[2] Keke Rosberg was the highest placed of the normally aspirated cars in thirteenth, just one place ahead of the Spirit-Honda of Stefan Johansson in fourteenth.[2]

Out of qualifying went Kenny Acheson (almost two seconds off the final qualifyer), Corrado Fabi and Johnny Cecotto.[1] Piercarlo Ghinzani was the last man to qualify in 26th, seven seconds slower than Arnoux, after Jean-Pierre Jarier almost failed to qualify after his time from practice was disallowed.[1]

No changes were made to the grid order before the race, with many asking if René Arnoux could do as had done in Canada a month before and win without any major challenge. Williams, meanwhile were closely analysing the performance of Spirit Racing, hoping that the engine that Honda had built for them lasted the distance, or was at least competitive in the time that it ran. All would be revealed when the lights went out at the start of the race.

Arnoux got away cleanly, but was beaten into the first corner by team mate Patrick Tambay before the pair opened a small lead over the rest, with Elio de Angelis barely making it round the first lap with a distributor failure.[2] Alain Prost sat in third followed by Riccardo Patrese, with Eddie Cheever beating Nelson Piquet off the line, while the Brazilian slipped down the order.[2]

Cheever's race came to an end on lap three, with Stefan Johansson's Honda engine shredding the belt to the fuel pump ending his race on lap six.[2] Patrese was the next of the leaders to fall, a turbo issue ending his BMW engine, promoting Andrea de Cesaris and Manfred Winkelhock into fifth and sixth.[2] The momentum, however, was with the two title contenders: Prost and Piquet, whom were slowly catching the Ferraris.[2]

On lap 14, Prost was on the gearbox of Arnoux, and duly grabbed second from his former team mate before setting off after Tambay.[2] Piquent man-handled the Brabham around the scarlet car five laps later, as Prost came up to the back of Tambay.[2] As the Frenchmen came up to the line to start lap 20, Prost moved to overtake the number 27 Ferrari, taking the lead after a swift manoeuvre into Becketts.[2]

Eleven laps later, Piquet moved into second with Tambay struggling on his tyres, although the pitstops did little to recover his lead, with the order unchanged.[2] The only man to move up was Nigel Mansell, whom pitted late and emerged in fifth, despite starting in eighteenth.[2] On lap 48, as Raul Boesel came in to retired his Ligier with a suspension issue, Mansell made his moved on Arnoux, taking fourth place from the second Ferrari.[2] For the next 19 laps, Mansell chased down Tambay to give the home crowd a podium.[2]

Time, and pace, were against him, however, as the Brit in the Lotus 94T missed out on the podium by a matter of seconds.[2] Prost took victory with ease, having never been challenged by Piquet since the latter had passed Tambay, while Tambay himself completed the podium.[2] Arnoux was left in a visibily disappointing fifth, while a late charge by Niki Lauda gave him sixth place, after de Cesaris began to struggle with tyre wear (also losing out to team mate Mauro Baldi).[2]

Victory for Prost now meant he held a six point lead over Piquet leaving Britain, while Patrick Tambay remained in contention in third, eight behind. A poor weekend for Keke Rosberg, well off the pace in every session, meant he failed to score at all, leaving him fourteen points behind, while Arnoux's disappointing display left him six behind the Finn in fifth.

Prost's victory also allowed Renault to pull three clear of Ferrari in the Constructor's battle, while Piquet's second place closed the gap between Williams and Brabham to two points. Niki Lauda's late charge ensured that McLaren continued to score points, but they were continuing to fall back from the others, leaving their home race six points behind Brabham.