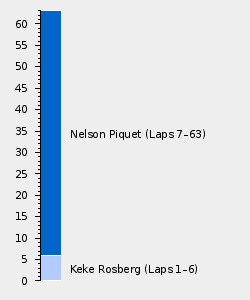 The 1983 Brazilian Grand Prix was the first meeting of the 1983 Formula One Season, held at the Jacarepaguá circuit in Brazil.[1] Despite a pre-season dominated by Renault (a dominace that meant that the championship looked set to be theirs), Nelson Piquet took a home victory in the BMW backed Brabham, as Keke Rosberg, reigning World Champion, was disqualified after a push-start in the pitlane.[1]

After the disasterous 1982 season, which saw two drivers (Gilles Villeneuve and Riccardo Paletti) lose their lives, and Didier Pironi have his promising career cut short, the Brazilian Grand Prix of 1983 was the first opportunity for the F1 World to move on. The winter saw engine deals as the main priority, with the age of the turbo dawning throughout the field. The prime example of this was Williams, who ran with Cosworth engines at Brazil as they waited for the their deal with Honda (whom backed Spirit Racing to develop the new engine) to come to fruition.[1]

Cars were also being redesigned to conform to the new "flat bottom" regulations that had been introduced to outlaw "Ground effect" (low pressure air created underneath the car that effectively sucked the car to the track).[1] Team Lotus were hit hard in the winter when Colin Chapman (founder and cheif designer) died in December, hurting the development of the new car, and harming the morale of the team.[1] Brabham, meanwhile, launched the BT52, having successfully negotiated with BMW for the renewal of their engine deal.[1]

The winter also saw many changes on the driver front, with Rene Arnoux the major talking point, joining Ferrari after his relationship with Alain Prost at Renault fell apart.[1] Prost was joined by Eddie Cheever, whose former team Ligier (who also lost Matra as engine supplier, Talbot as main sponsor, and Jacques Laffite to Williams) took on Jean-Pierre Jarier and Raul Boesel as their drivers.[1] Tyrrell gave Danny Sullivan a drive after their new sponsor Benetton suggested that he partner Michele Alboreto, while ATS reduced to a single car with Manfred Winkelhock as their only driver (Eliseo Salazar secured a drive with RAM March for the year).[1] Bruno Giacomelli was pushed out of Alfa Romeo and joined Derek Warwick at Toleman, with many other new faces joining the 1983 grid in Brazil.[1]

The full entry list for the 1983 Brazilian Grand Prix is shown below:

Unlike in 1982, practice would serve as a qualifying session, meaning that if a driver set a faster time in the practice session then they did in qualifying, that time would be used.[1] In 1982, this was only applied in races where the entry list was over 30 cars, with cars eliminated based on time.[1] Regardless, the 28 car entry list meant that no-one was eliminated before the main qualifying session.[1]

Despite the en-masse move to turbo power, it would be the ever so eternal Cosworth DFV engine that powered Keke Rosberg to pole, a feat he only achieved once in his championship season.[1] He beat the turbo powered Alain Prost and Patrick Tambay, with Niki Lauda the next non-turbo runner in ninth.[1]

The 26 car grid limit meant that two drivers were eliminated, with Piercarlo Ghinzani (in his first full season of F1 with Osella) not quite quick enough to beat the cut.[1] He was joined by Andrea de Cesaris in the Alfa Romeo, who had been safely through, before being excluded from the results after missing a weight check during the session.[1]

* de Cesaris was excluded from the results after failing to attend a weight chech during qualifying.

Although de Cesaris and Alfa Romeo attempted to fight the exclusion, the decision was upheld meaning there were no last minute changes to the grid.[1] Brabham would once again use a pitstop strategy for the race, something they had experimented with since the British Grand Prix the previous year.[1] Elio de Angelis would change his car after the parade lap, meaning he missed the start, and was later disqualified from the result.[1]

Rosberg streaked ahead at the start from Prost in the Renault and Nelson Piquet (who jumped the slow starting Tambay), while Mauro Baldi and Michele Alboreto came together and delayed the second half of the field.[1] Piquet soon dispatched of Prost on the second lap, before sweeping past Rosberg on lap seven, not to be seen again until his stop on lap 40.[1] The race soon settled down, with various technical issues affecting the lower placed cars as the race went on.[1]

﻿Rosberg had a scare when his car caught fire during his pit stop (Williams had also decided that a pit stop strategy would suit the Brazilian Grand Prix as well as Brabham), which saw the Finn leap out of his car.[1] The fire was relatively minor, however, and Rosberg quickly got back into the car.[1] However, the team had to push-start the car, so although Rosberg was still in the race (now out of the points), whether he would be disqualified remained unclear.[1]

﻿Prost had since taken over second, having only changed tyres during his stop.[1] However, the delicate Renault required nursing (a fact proved by team mate Eddie Cheever whose suffered a turbo failure on lap 40), meaning he soon fell victim to Niki Lauda.[1] Lauda ran without stopping, and his pace declined near the end of the race, meaning the charging Rosberg caught him with a few laps to spare.[1]

﻿Piquet ran on untroubled at the front, however, and claimed a fairly easy victory at his home race (made more satisfying after his disqualification the previous year).[1] Rosberg was still throwing the Williams at every turn to claim second, while Lauda casually crossed the line for third.[1] Prost had faded badly over the final couple of laps, falling behind Jacques Laffite, Patrick Tambay and Marc Surer, whom claimed the final points.[1]

﻿However, Rosberg was later excluded from the result as a result of his push start, with the team deciding to appeal against the decision.[1] This would normally mean that the order would be changed, with Lauda being promoted to second, however the officials decided that second place would not be awarded at all.[1]

Retrieved from "https://f1.fandom.com/wiki/1983_Brazilian_Grand_Prix?oldid=77832"
Community content is available under CC-BY-SA unless otherwise noted.