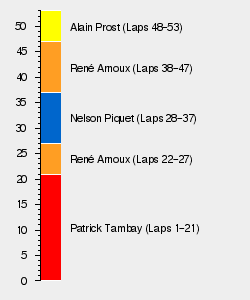 The 1983 Austrian Grand Prix was the eleventh round of the 1983 Formula One Season, held at the Österreichring in Austria.[1] Alain Prost claimed victory in a race which saw numerous battles for the lead, with René Arnoux second and Nelson Piquet in third.[1] Pole position had gone to Patrick Tambay, which meant that Ferrari secured five pole positions in a row, and the 100th for the Italian car maker since the start of Formula One in 1950.[2]

A single week separated the German and Austrian Grand Prix, although there was still improvement to be made for teams and drivers.[3] Tyrrell were the busiest in that time, finally completing the 012 chassis for Michele Alboreto, with several others making minor tweaks to their cars, before a race that was expected to be dominated by the turbo contingent.[3] High altitude meant reduced power (as there was less air), so those without a turbo charger to compensate had little hope of winning, particularly on a circuit where the 180mph mark could be achieved in two or three places.[3]

Championship-wise, the recent form of René Arnoux meant there was now, arguably, a four way battle for the title, although Alain Prost still held the initative. The Renault backed Frenchman held a nine point lead over Nelson Piquet, whom was holding a slender, two point lead over Patrick Tambay. Arnoux sat five points off the Brazilian and fourteen behind Prost, but was the man with the reliable car, and recently the quickest in qualifying, with the last four shared between himself and team mate Tambay.

Arnoux's recent form also meant Ferrari were incharge of the Constructor's championship, having overturned a three point defecit in Germany to lead by three. Brabham and Williams were in a tight battle for third, with neither entertaining any series thoughts of challenging the leading duo, themselves separated by a single point. McLaren remained in the top five despite their terrible qualifying record, with John Watson and Niki Lauda only picking up the odd point or two from the lower reaches of the grid at almost every race.

The full entry list for the 1983 Austrian Grand Prix is shown below:

As expected, the best times in practice were set by the turbo charged cars, with Ferrari the class of the field, Tambay and Arnoux seemingly untouchable in pace.[3] Only Nigel Mansell in the new Team Lotus 94T and Prost were within a second of them in practice, with no non-turbo car getting within four seconds of the two Ferraris.[1] Spirit Racing were struggling with their Honda engine, the only team to fail to set a practice time under 1:40.000.[1]

Arnoux and Tambay found more pace to extend their advantage in pure pace, with Tambay on pole for the second race in a row.[3] Arnoux was to start alongside, while Nigel Mansell claimed third, getting to just outside half a second outside of the Ferraris.[3] Prost slipped to fifth in the session, unable to improve upon his practice time, as title rival Nelson Piquet jumped ahead into fourth.[3] Niki Lauda was the best of the non-turbo cars still, but remained in fourteenth in the timings, with World Champion Keke Rosberg immediately behind him.[3]

Raul Boesel was one of the three to drop out of qualifying, the first time he had failed to qualify for Ligier since he joined them.[3] Johnny Cecotto and Kenny Acheson joined him on the sidelines for the race, which meant that both Osellas qualified for the first time since the team had adopted the Alfa Romeo V12 engine.[3]

No changes were made to the starting order after qualifying, with the four championship contenders all starting in the top five of the grid.[4]

It was formation flying at the front by Ferrari, as Patrick Tambay led Rene Arnoux into the first corner, followed by Nelson Piquet and Alain Prost, Nigel Mansell having had a bad start was down to fifth.[3] Yet his start was better than that of his team mate, Elio de Angelis, whom spun his wheels at the start and speered into Bruno Giacomelli.[3] De Angelis was out on the spot, while Giacomelli crawled back into the pits to get repair, but would ultimately retire.[3]

After being avoided by the rest of the field, a second incident occured when Piercarlo Ghinzani tried to pass Jacques Laffite at the chicane, putting the Frenchman into a slide.[3] Laffite regained control after hitting the Arrows of Marc Surer, sending the Swiss driver into a spin.[3] Surer's race was then ended by the Tyrrell of Danny Sullivan, whom was left with nowhere to go, hitting the front left corner of the Arrows.[3] Corrado Fabi was next on the scene a breaked heavily, only to haveJohn Watson use him as a brake as well, leaving the Brit without a front wing.[4] Both, however, continued.

As the various parts of Formula One machinery were removed, the battle at the front became tactical, with Tambay and Arnoux holding a slight gap over Piquet and Prost.[3] As the latter pair battled away for third, Arnoux sat behind his team mate, waiting for an opportunity to pass in an excellent display of patience. His chance came on lap 22, as the leaders came up to the Ligier of Jean-Pierre Jarier, with Tambay attempting to get past at the Boshe-Kurve, only to be blocked by his compatriot.[4] Arnoux went wide, hence giving him the advantage into the long left hander that followed, with Tambay now blocked by Jarier and his team mate.[4] A brief break in his battle with Prost meant Piquet had caught up to the Ferraris, so as Arnoux slipped inside his team mate, so did Piquet, pushing a frustrated Tambay down to third.[4]

Tambay's day was to get worse when, on lap 31 he pulled his car in to retire with an oil leak, costing him a potential podium.[4] Piquet, meanwhile, benefitted from an impressive stop, taking the lead from Arnoux, with Prost retaining third.[3] All to soon, however, the BMW engine began to lose power, and so Piquet dropped behind the remaining two title contenders.[3] As the race developed, Prost's team mate, Eddie Cheever also came into play,as his pace made him a serious threat to the wounded Piquet in the latter stages.

Prost gradually closed on former team mate Arnoux as the laps fell away, before making several attempts to get past on lap 48..[4] He finally suceeded as Arnoux slid wide at the Boshe-Kurve, allowing Prost past and into the lead.[4] Prost went on to win, with Arnoux second and Piquet third, the Brazilian denying Cheever a podium by little over half a second.[3] Mansell and Niki Lauda completed the points scorers, with Jarier finishing seventh, two laps down after his involvement in the battle for the race lead.[3]

So Alain Prost left Austria with a fourteen point lead over the rest, although the little Frenchman tried to play down this advantage.[4] Nelson Piquet remained in second, with a three point gap between himself and René Arnoux preventing a French one-two in the championship. Patrick Tambay's retirement meant that he had slipped behind his team mate, with Keke Rosberg holding on to fifth, but now 26 points behind the leader.

Prost and Eddie Cheever's combined tally of 12 points in the Austrian Grand Prix meant that Renault gained the upperhand in the Constructor's Championship. A six point swing in the Frenchmen's favour left Ferrari three points behind, with Brabham holding on to third, but now 24 points behind. McLaren closed the gap to Williams to six points after Niki Lauda claimed sixth, but they were both falling away in pace without the turbo power of the leading three. Both would have to wait for their respective projects with TAG and Honda to be completed in the coming weeks if either was to compete for serious points again.