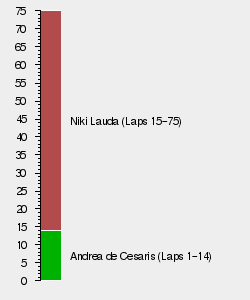 The 1982 United States Grand Prix West, held at the Long Beach circuit in California, was the third round of the 1982 Formula One Season.[1] The race itself was the first of three Championship Grand Prix scheduled for the United States in 1982, a record for a country in a single season.

After a shock result in qualifying which saw Andrea de Cesaris claim a maiden pole position, and the return of an American racing legend, Niki Lauda took his eighteenth career win, and first for McLaren. Keke Rosberg and Riccardo Patrese joined him on the podium, as Championship leader Alain Prost crashed out.

The biggest news to come in the two week break between Brazil and the US West was the sudden retirement of Carlos Reutemann. The Argentinian ace had considered retiring at the end of the 1981 season, but had impressed early in 1982, claiming second at the South African Grand Prix. But, with his heart elsewhere, and the Falklands War erupting shortly before the race, Reutemann opted to hang up his helmet.

Williams therefore scrambled to find a replacement, asking several drivers, including Reutemann's rival Alan Jones. Ultimately, however, the team would settle for a one-off drive by an American racing legend, whom had moved back to his homeland to compete in the CART Series. Indeed, Mario Andretti would return to a Formula One cockpit for just one more time, at his home race in Long Beach.

Alain Prost had a comfortable 18 point lead in the championship after winning the opening rounds, eleven points clear of his nearest challenger John Watson of McLaren.[1] The ongoing FOCA/FISA dispute appeared to have fallen into the background, with no fresh concerns ahead of the first of three Grand Prix in the US.[1]

There was a notable change to the circuit for 1982, after the Queens hairpin was adjusted into a 90 degree right hand turn much to the dismay of many of the drivers.

The full entry list for the 1982 United States Grand Prix West is outlined below:

There were no real suprises in practice, although Ferrari would test an extra large rear wing, which was fitted to Gilles Villeneuve's car for qualifying and the race.[1]

Unlike in practice, however, qualifying produced a series of shocks that would affect the race on Sunday.[1] Firstly, the Renault's were off the front row, René Arnoux and Alain Prost claiming third and fourth, as the turbocharged cars as a whole were relatively slow compared to the pace shown in the first two meetings of the season.[1] Secondly, Andrea de Cesaris, driving an unfancied Alfa Romeo which had struggled to get into the race at the previous meetings, took pole (his team mate Bruno Giacomelli taking fifth), with Lauda slipping his McLaren into second.[1] Villeneuve, sporting his new wing, claimed seventh, although he was quicker than his team mate Didier Pironi, despite the disappointment in the car's performance. Reigning champion Nelson Piquet would start from sixth place, the Brazilian suffering a sizeable accident during qualifying.[1]

The full qualifying results for the 1982 United States Grand Prix West are outlined below:

The grid for the 1982 United States Grand Prix West is shown below:

De Cesaris, despite his impressive display was expected to go backwards off the line, while there were mumblings of a protest against Villeneuve's car after qualifying (with the Ferrari effectively sporting two rear wings which had a combined length greater than those allowed in the regulations).[1]  There was a clarification made by the FIA overnight, and the pace of VIlleneuve against his team mate meant no official protest was submitted prior to the race.[1]

Contrary to popular though, de Cesaris had the best start of any of the leaders, getting clear of the charging Arnoux (who leapt ahead of Lauda at the start).[1] De Cesaris immediately began building a lead, as it became clear early on that Arnoux was holding up Lauda and de Cesaris' team mate Bruno Giacomelli (whom had overtaken the slow starting Alain Prost on the opening lap).[1] The ATS cars of Manfred Winkelhock and Eliseo Salazar both tapped the wall (in seperate incidents) in the early stages, causing both to retire.[1]

The front of the field suddenly changed in the space of a lap, as Lauda pressed Arnoux on lap 5.[1] The Austrian pulled right to go to the inside of Arnoux, while Giacomelli (who had joined the pair as they duelled) stayed behind Arnoux as they went into the old hairpin.[1] Giacomelli misjudged his breaking ability, slamming into the back of Arnoux's car and putting both out of the race.[1] Villeneve was promoted to third, while his team mate, Didier Pironi retired with accident damage.[6]

Lauda reeled in the young Italian over the next ten laps, as his team mate John Watson forced Villeneuve into a mistake to take third,[6] Lauda applied pressure on his significantly less experienced rival, Lauda overtaking when De Cesaris became stuck behind the backmarker of Raul Boesel.[6] Just before Lauda's move, Prost retired with break failure, and was forced to watch as Lauda began to eat into his championship lead.[6] A few laps later Mario Andretti retired with suspension damage.[1]

Villeneuve and Keke Rosberg began a scrap for forth which would last for a couple of laps, as they both caught Watson.[1] Rosberg initially got ahead of the Ferrari at the Queen's hairpin, but the more powerful Ferrari jumped back ahead.[1] Rosberg tried again, and two laps later got ahead, having forced Villeneuve onto the marbles on the outside of the track (which brought Nelson Piquet into the frame).[1] Rosberg proceeded to catch as pass Watson over the next few laps.[6]

The race began to calm, although there were two further incidents that would affect the order at the front.[1] First Piquet made a mistake to end his race in the barrier at one third distance (having already crashed in practice), meaning Prost could breath slightly more easily (as Piquet was the closest to him in the points).[1] A few laps later, de Cesaris suffered an engine failure, putting him both into the wall and out of the race.[1] Lauda, meanwhile, began to drive within himself to ensure his win.[1]

Lauda crossed the line to take his first win since 1978, in only his third race since his return.[1] Rosberg joined him in second, having demonstrated his ability throughout, while Villeneuve had a relatively quiet drive to third (Watson dropped to seventh with a pitstop).[1] Riccardo Patrese who had been missing his front wing throughout the race, caught and passed Michele Alboreto in the Tyrrell in the closing stages to take fourth.[1] This result changed, however, when Patrese's team Brabham and Tyrrell, protested against Villeneuve's Ferrari, concerning its rear wing.[1][6] The FIA deemed the wing to now be illegal, meaning Villeneuve was disqualified, promotied Patrese to the podium, and Watson into the points.[1]

Alain Prost retained his Championship lead, although the now second placed Niki Lauda was just five points behind. Keke Rosberg left the US in third, tied on points (but judged ahead on other results) of John Watson, with Carlos Reutemann still in the top five, despite retiring from Formula One. Riccardo Patrese and Elio de Angelis were the latest names to get off the ground, while Didier Pironi and Ferrari still only had one point.

Renault still led the Constructors' Championship, although McLaren had closed to within two points, with Williams also gaining. Team Lotus and Tyrrell were locked together on six points, while Brabham gained their first points of the season through Patrese. ATS were the only other team to have scored points, although they still led Ferrari.