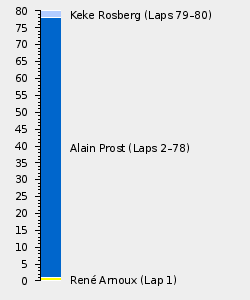 The 1982 Swiss Grand Prix, named so that the organisers could avoid presenting a French bias, was the fourteenth race of 1982, held at Dijon-Prenois in France.[1] The first "Swiss" Grand Prix since 1954 would be won by Keke Rosberg, who took the lead on the penultimate lap.[1]

It would be the first and only win for Rosberg in 1982, and also the last "Swiss" Grand Prix to be held, but played an important part in the Championship. With Didier Pironi still in hospital from his accident in Germany, the Championship fight was opened to everyone from John Watson in third, to Niki Lauda in fifth, with appeals from earlier in the season still to be decided upon.

The Dijon-Prenois circuit in Prenois, France had been chosen to host the "Swiss" Grand Prix for three reasons. The first was that the success of French drivers over the recent years (which was demonstrated by the 1-2-3-4 in the French Grand Prix earlier in the season) meant that France should arguably host two Grand Prix.[1] The second was that Switzerland still outlawed motor racing within its borders (a fact which remains to this day), meaning that Dijon could become the host of the Swiss Grand Prix to fulfill this opinion (as it had done so for a non-championship race in 1975).[1] But, most importantly, the cancellation of the 1982 Argentine Grand Prix meant that another Grand Prix could be held in Europe, the home of the Championship.

Driver wise there were no changes, which meant that attention would be solely focused on the championship.[1] The main contenders for the championship emerged from Austria, with Keke Rosberg sitting six points behind Didier Pironi (whom was unlikely to race in F1 again after the injuries he sustained in Germany). John Watson retained an outside chance of the title (particularly if his recent run of bad luck changed), although he was increasingly likely to fall behind Alain Prost, the other man with momentum.

The Constructors' Championship saw Ferrari maintain their lead coming into the Swiss spectacle, although with only Patrick Tambay in their garage, they were more than likely to fall behind McLaren if the British team had a good weekend. Williams and Renault seemed to be in a private duel for third, while Team Lotus had built a big lead over Tyrrell after Elio de Angelis' win for fifth.

The full entry list for the 1982 Swiss Grand Prix is shown below:

Renault dominated the practice as they had done in Paul Ricard for the French Grand Prix.[1] Brabham continued with their plan to refuel during races, constantly practising stops, having actually got as far as making a pitstop before their cars retired in Austria.[1] Marc Surer was also going well in practice for his home Grand Prix, although his chances of victory were thinner than a piece of paper at best.

The same story was told in qualifying, with Rene Arnoux (who changed his set up to be more competitive during the race), losing out to Alain Prost in the battle for pole.[2] They were followed by Riccardo Patrese in his Brabham-BMW (a second off the pace of Arnoux), while Niki Lauda claimed fourth to start highest of the normally aspirated cars.[1] Patrick Tambay had a difficult session, only managing tenth place, while Keke Rosberg lapped quick enough to claim eighth.[1]

Eliminated from qualifying were Chico Serra Fittipaldi, Tommy Byrne Theodore and Mauro Baldi (whom cut a depressed figure in his Arrows after his impressive display in Austria). Marc Surer, meanwhile, took his best qualifying position of the year with 14th, making up for his team mate's disappointing display.

The starting grid for the 1982 Swiss Grand Prix is shown below:

The big story after qualifying was the decision by Patrick Tambay to miss the start just before the race, a pinched nerve causing his enough discomfort that he did not want to compete.[1] Further down, Roberto Guerrero was forced to start from the pitlane (officially 30 seconds after the race start) after replacing his engine after practice.[2] These were, however, minor concerns compared to anticipated duel at the front, as the Renault team mates went to track to fight for victory.

Arnoux had the better start, sweeping ahead of Prost at the first corner, although Prost would echo his manoeuvre a lap later to take the lead.[1] They pulled well ahead of the rest of the field, As Patrese fought off Lauda, his team mate Nelson Piquet and Rosberg in the Williams.[1] It was not long before the Brazilian (dragging the Finn in his wake) made his way to third, setting off after the quickly disappearing Frenchmen.[1]

By the eleventh lap, Piquet had forced his way past Arnoux, where he stayed, until he stopped for his pitstop on lap 40, dropping him to fifth (Brabham again attempting to use a pitstop strategy to beat the Renaults).[1] Arnoux was left to defend from the charging Rosberg, whom suddenly found additional speed in the latter third of the race.[1] When Arnoux fell to a fuel injection failure five laps from the end, Rosberg set his sights on his main title rival.[1]

Prost had little to fight with, shown by the ease with which Rosberg pulled up behind him with two laps left to run.[1] Rosberg then calmly swept aside the Frenchman, but had to complete an additional lap as the officials forgot to wave the chequered flag on the final circuit.[1] Nonetheless, Roberg claimed his first Formula One victory, and took the lead in the driver's championship.[1]

The points would be handed out to Lauda (another quiet drive securing him third place), Piquet (whom struggled for pace after his pitstop), Patrese (again victim of a post-pitstop preamble) and Elio de Angelis of Team Lotus.[1] This result left Ferrari in pole position for the team's title, despite Tambay not competing, as their major rivals (McLaren and Renault) failed to secure enough points to overhaul their lead.[1]

* Arnoux was still classified as he had completed more than 90% of the race distance.

With victory came the spoils for Keke Rosberg, as he claimed the lead in the Championship by three points, with Didier Pironi unlikely to race again in 1982. Alain Prost was therefore the Finn's closest challenger, but now eleven points down (a margin the Frenchman had held after the Brazilian Grand Prix), with John Watson a further point behind. The Brit was also level on points with team mate Niki Lauda, as Elio de Angelis successfully fended off the Brabham duo of Riccardo Patrese and Nelson Piquet for another weekend.

Ferrari remained at the summit of the Constructors Championship despite not running Patrick Tambay in Dijon. McLaren, to their credit, had closed the gap to just four points, but it was Williams who were on the move, now on 55 points. Renault broke the 50 barrier at the Swiss Grand Prix too, but remained in fourth, as Team Lotus and Brabham-BMW looked set to squabble for fifth place.

Retrieved from "https://f1.fandom.com/wiki/1982_Swiss_Grand_Prix?oldid=72225"
Community content is available under CC-BY-SA unless otherwise noted.