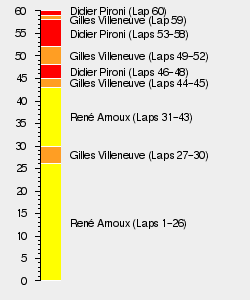 The II Gran Premio di San Marino was the fourth race of the 1982 Formula One Championship, although the boycott by half of the usual entrants almost overshadowed the result.[1] The FOCA/FISA battle after the 1982 Brazilian Grand Prix, which had come a head when two cars were disqualified from the result, prompting FOCA to protest in San Marino.

With Brabham, Williams and McLaren all absent (along with a host of smaller teams), the 1982 San Marino Grand Prix effectively became a battle of the manufacturers, with Ferrari emerging on top for the first time all season.[1] Didier Pironi snatched victory from Gilles Villeneuve in the dying laps (after both Renaults suffered engine failures), with Villeneuve promising to never speak to Pironi as a result.[1] His words could not have been truer, given what was to unfold in Belgium two weeks later.

In between the United States West and San Marino Grand Prix, the FIA decided to exclude Nelson Piquet and Keke Rosberg from the result at the Brazilian Grand Prix.[1] Their reason was that their cars were fitted with water tanks as ballast which meant that, effectively the car could run in the race underweight as the tanks could be filled before post-race scrutineering.[1] The Formula One Constructor's Association (FOCA), which represented both Brabham and Williams in the political aspect of Formula One, opted to boycott the next Grand Prix, San Marino, in protest.[1]

This left Ferrari, Renault and Alfa Romeo as the only entrants (as they were not represented by FOCA). However, they were soon joined by Osella and ATS; whilst both were FOCA-member teams, they had become sick of the British domination of the organisation. Toleman also entered the race, having only just been established in the mid-season of 1981 they were not yet eligible to join FOCA. Ligier whilst not a FOCA member, decided to take advantage of the situation and withdraw from the race in order to further develop their car following a troublesome start to 1982.

More notable, however, was the decision of the Tyrrell team to participate in the race, who were one of the largest teams in FOCA. The team who had been struggling for cash had recently gained sponsorship from Italian firms Candy and Imola Ceramica after the strong performances in recent races of its driver Michele Alboreto. The team therefore felt obliged to race in the event in order to please sponsors. With Arrows driver Marc Surer recovering from his injuries sustained in South Africa (Arrows not competing this weekend), his temporary replacement in the team, Brian Henton replaced the under performing Slim Borgudd at the Tyrrell team. [1]

The full entry list for the 1982 San Marino Grand Prix is shown below:

With Ferrari and Renault as the only major teams competing in a 14 car field, it was unsurprising that they dominated practice, a fact that resulted from the Imola circuit layout (which favoured turbocharged cars).[1] Derek Warwick had a big accident during practice when his Toleman suffered a suspension failure at Rivazza whilst Didier Pironi suffered a heavy crash in his Ferrari when he spun off the circuit.

It was the same story in qualifying, with Renault coming out on top, as René Arnoux claimed his second pole position of the year, while Alain Prost was also able to beat the Ferraris to second.[1] Villeneuve (now with a normal rear wing) beat Pironi for the fourth race in a row to claim third, as their battle intensified.[2] Michele Alboreto was best of the rest, beating both of the Alfa Romeos (whom were still on a relative high from their performance in the US three weeks earlier).[1]

The Renault's appeared to be the fastest but their notoriously poor reliability record looked set to play a part in the race. Arnoux suffered a turbo blowout during qualifying despite taking the pole time, an ominous sign for the race ahead.

The starting grid for the 1982 San Marino Grand Prix is shown below:

Before the race, Derek Warwick was forced to withdraw with an electrical issue, while Brian Henton, making his debut for Tyrrell, was pulled off the grid with a broken clutch.[1] This left 12 cars to race around the increasingly lonely Imola circuit.[1]

It was grid order off the line, with Arnoux maintained the lead as Prost behind him had a sluggish start and dropped behind Villeneuve and Pironi.[1] Prost began to drop back into the clutches of Alboreto's Tyrrell and the two Alfa Romeo cars of Giacomelli and De Cesaris.[1] De Cesaris began to limp and was soon passed by Teo Fabi's Toleman before pulling into the pits to retire. More notably was a lap later Alain Prost's Renault began to suffer engine trouble which ensnared his retirement. Riccardo Paletti's debut race came to an end a lap after Prost with suspension failure.

Arnoux continued to lead the race, however the two Ferrari's of Villeneuve and Pironi were now on his tail. Meanwhile Fabi who had been running well for Toleman in sixth was forced into the pits with boost problems, ending a strong race for him. As Fabi pulled out, the other minor cars of the two ATS's of Salazar and Winkelhock as well as Jarier's Osella battled for the final points placing. [1] Villeneuve whilst battling with Arnoux went wide at the Variante Bassa and briefly let Pironi through into second, however reclaimed the place a few laps later. On lap 25, on the run up to Piratella, Villeneuve finally made it past Arnoux much to the delight of the tifosi.

Further down the field, Bruno Giacomelli had retired from fifth with engine problems and shortly afterwards Manfred Winkelhock came into the pits for repairs after damaging his car from an off track excursion. Villeneuve led, however Arnoux and Pironi remained on his heels. Lap 29 both Arnoux and Pironi got a good tow on Villeneuve, Arnoux moved into the lead whilst Villeneuve was at least able to hold off his team mate. A few laps later Pironi moved into second in the run down to Tosa. On lap 40, the order between the two changed again as Villeneuve retook second at Tosa. Arnoux, Villeneuve and Pironi continued their fight for the lead, however on lap 44 it was finally reduced to a two man race as Arnoux suffered a spectacular turbo failure around Tamburello, ending his race. The drama between the Ferrari duo was not over, Villeneuve went wide at Bassa shortly after Arnoux's retirement which allowed Pironi into the lead. Villeneuve fought tooth and nail with Pironi and went through back into the lead the following lap whilst the pair came up to lap Salazar's ATS.

Ferrari ordered the duo to keep the cars running at a reduced pace to prevent any mechanical failures, although they would lap every other car (bar Alboreto) well before the end.[1] The team hanging out a 'SLOW' sign eight laps from the end. Villeneuve interpreted Ferrari's orders as to hold position and slow down, effectively giving him the victory.[1] In contrast to this Pironi believed the order to simply mean running less power in the turbo's.[1] It was then a surprise to Villeneuve to see Pironi blast past him at Tamburello shortly after receiving the pit signal. On the penultimate lap, Villeneuve moved into the lead again at Tosa. Villeneuve had until this point believed that Pironi's show of force was simply to please the fans at the Imola circuit and his intention was always to obey the slow sign.[1]

As the pair approached the Tosa Corner for the final time, Villeneuve, once again ahead, did not expect Pironi to challenge again, opting not to defend the inside of the corner.[1] Pironi took full advantage, making a sudden dart for the inside to take the lead, and ultimately victory a few moments later, not realising that he had just destroyed the relationship between himself and his team mate.[1] A sour Villeneuve followed Pironi onto the podium, later stating that he would never talk to his team mate again, little knowing the truth of this comment.[1] On a brighter note, Alboreto took an unexpected podium by finishing third, while Jean-Pierre Jarier and Eliseo Salazar claimed their first points of the season.[1] Winkelhock was classed as finishing in sixth, but was disqualified after the race, rather ironically considering the situation in which the race was run, for being under weight.[2]

Alain Prost continued to lead the Championship despite a second successive retirement for the Frenchman. Didier Pironi and Gilles Villeneuve were the big winners, however, as they both leapt up the table, Pironi now sat in third. Michele Alboreto found himself in fourth, ahead of Keke Rosberg, as Jean-Pierre Jarier and Eliseo Salazar added their first points of the season.

Renault and McLaren remained locked in first and second, but Ferrari finally had meaningful points for their performance, meaning they sat in third, six points behind the French team. Tyrrell dropped to fifth but opened a small gap to Team Lotus through Alboreto's efforts, while ATS found themselves tied on points with Brabham. Osella also had their first points on the board, courtesy of Jarier.