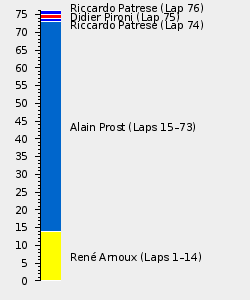 The 1982 Monaco Grand Prix was the sixth race to be held in 1982, with the paddock was still struggling to come to terms with the death of Gilles Villeneuve at Zolder two weeks earlier.[1] Ferrari opted to only enter one car in Formula One's most iconic race, with Didier Pironi set to battle on alone.

The race itself was one of the oddest in Formula One history, as the lead changed almost constantly in the final laps, with several drivers seemingly on for victory, until succumbing to a failure or accident. Riccardo Patrese survived the longest to take victory, ahead of an emotional Pironi and Andrea de Cesaris, whom was among those to drop out while leading. The race eventually became known as "the race nobody wanted to win".

Further down the grid, several teams' futures were put in doubt when Avon Tyres announced their immediate withdrawal from the championship, selling their remaining stock to March (whom had cancelled their contract with Pirelli).[1] Theodore and Ensign were then left without a supply for the remainder of the season, although Theodore secured a contract with Goodyear in time for the Monaco Grand Prix.[1] Ensign, however, were reduced to using already used sets of Avon tyres, buying what they could from other teams.[1]

Other than the lone Ferrari entry, there were no other changes to the grid, as Emilio de Villota continued in the third March. Competition would also be fierce in the lower end of the field, as Monaco, due to its restricted layout, was limited to only having 20 cars start the race. With 31 cars entered, there was also a serious risk that one of the larger teams could lose one of their cars as well.

Below is the full entry list for the 1982 Monaco Grand Prix:

For only the second time in 1982, practice was used as a pre-qualifying session to reduce the number of cars to a more sizeable number for qualifying.[1] Unfortunately for March, and their new tyres, two of their drivers, Emilio de Villota and Raul Boesel were eliminated, as were Teo Fabi, Riccardo Paletti and a disappointed Chico Serra (fresh from scoring the first point of his career in Belgium).[1]

The failed pre-qualifiers would be joined by the lead March of Jochen Mass, Jan Lammers , Derek Warwick, Jean-Pierre Jarier, the quiet Colombian Roberto Guerrero and Mauro Baldi in the Arrows.[1] At the front, there was a mix of expected and surprise results, as René Arnoux took another (expected) pole, while Bruno Giacomelli put his Alfa Romeo onto the second row.[1] Pironi claimed fifth behind Alain Prost, with Keke Rosberg maintaining the honour of the Ford Cosworth powered runners in sixth.[1]

Below is the starting grid for the 1982 Monaco Grand Prix.

The organisers decided to limit the number of starters down to 20 for the fight around Monaco, although most of the attention was focused at the front.[1] Were the Alfa Romeos finally going to build on their recent form in qualifying and get a decent race result? Was someone going to finally going to overtake Prost in the points, or was the Frenchman going to score for the first time since the Brazilian Grand Prix? The answers to these questions (as well as numerous others) would be answered once the race around Monte Carlo got under way, with a blanket of cloud covering the principality.[1]

Unlike most visits to Monaco, the start was not that costly, with Arnoux pulling ahead smartly while Patrese lost out to Giacomelli into the first corner.[1] Giacomelli's team mate Andrea de Cesaris made a better start, leaping in front of Keke Rosberg and Michele Alboreto off the line, immediately putting Pironi under pressure.[1] Alfa's joy would not last long, however, as Giacomelli became the first retirement with a transmission failure four laps later.[1]

The order remained the same for the next ten laps, as the usual stalemate around Monaco settled across the field.[1] Then Arnoux, under very little pressure, spun and stalled, giving the lead to his team mate Prost (who had used Giacomelli's dramas to get infront of Patrese).[1] Rosberg took Alboreto during the next few laps, while Pironi took most of his front wing off on a back marker, although this modification did little to reduce his pace.[1] The two Ligier-Matras and the ATSes were the next to fall through individual issues.

Race returned to a dormant state until the 65th lap, when rain began to hit the track.[1] The first car to fall was Rosberg, who took enough damage from the wall to retire, while his team mate Derek Daly removed the rear wing (and some of his gearbox casing) in a spin at Tabac, although the Irishman kept going.[1] Their dramas gave Prost and Patrese some breathing space, with their private battle (which was mainly a case of Patrese trying to catch the Renault) becoming the decider to the race.[1]

This was not the case, however, as on lap 74, two from the end, Prost put himself into the wall after the chicane, handing victory on a plate to Patrese.[1] This was not the case, however, as Patrese then spun at the Lowes hairpin, although his use of the steep slope into the corner prevented him from stalling.[1] Pironi and de Cesaris swept past, with victory looking to go to one of the Italian teams.[1] Fate had other ideas, however, as both the Alfa and the Ferrari decided to use the last of their fuel before the end of the final lap, leaving the only logical candidate for victory as Nigel Mansell.[1]

Yet, it would be Patrese who would win the day, as assistance from the marshals put him back into the race, with Mansell still a lap down.[1] Patrese crossed the line before Mansell could unlap himself, which meant Pironi and de Cesaris were on the podium despite not finishing.[1] It was a similar story for Daly, who retired a lap after Prost, but was classified as sixth overall as none of the runners behind him could get themselves unlapped.[1]

* Pironi, de Cesaris, Daly, Prost and Alboreto were still classified for completing 90% of the race distance.

Remarkably, Alain Prost retained his lead despite failing to score for four consecutive races, with John Watson holding station in second. Didier Pironi climbed to third through his second place, displacing Keke Rosberg, while Riccardo Patrese leapt into the top five with his victory. Derek Daly was the latest name to add a point to his name for the season, his first for Williams.

McLaren retained their lead in the Constructors' Championship, as Ferrari levelled Renault's tally of 22, although Prost's two wins meant the Frenchmen were deemed to be ahead. Williams found themselves one point back in fourth, while Team Lotus finally overcame Tyrrell in their battle for the top five, although they were now split by Brabham. Alfa Romeo also secured their first points of the season, courtesy of Andrea de Cesaris' podium.

Retrieved from "https://f1.fandom.com/wiki/1982_Monaco_Grand_Prix?oldid=90376"
Community content is available under CC-BY-SA unless otherwise noted.