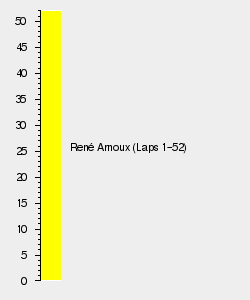 The 1982 Italian Grand Prix was the penultimate round of the 1982 Formula One Season, hosted at the Monza circuit in Italy.[1] Despite Mario Andretti (returning to the paddock in a Ferrari for the injured Didier Pironi) taking an impressive pole position (in a qualifying session that saw all of the qualifiers set a time under the lap record), it would be René Arnoux whom took victory, from the Ferraris.

Keke Rosberg almost secured the World Championship despite not scoring any points, with John Watson the only man able to challenge him for the title, at Caesars Palace.[1] Ferrari, for their part, were almost made Constructors' Champions in Italy too, and would only be denied if McLaren took two podium positions in America.

Coming into Italy, Ferrari announced that Mario Andretti, the Italian-American hero from 1978, would compete for them in Didier Pironi's car (initially for one race).[1] With Arnoux joining Patrick Tambay for 1983, Renault announced their capture of Eddie Cheever to partner Alain Prost.[1] Rumours also circulated that the French team had engineered engine deals for Lotus and Ligier (the latter possibly to ensure Cheever's move), while McLaren were thought to be in discussion with Porsche for engines (which would be branded as TAG products).[1]

Championship wise, Keke Rosberg came to Italy with a three point lead over Pironi, although the Frenchman was unlikely to race again after his horror crash at Hockenheim. Prost, the next contender, sat 11 points behind, with John Watson and Niki Lauda both on 30. A win for Rosberg would see him win the title, although he only had to score within two points of Prost (or three of the McLarens) to take the title.

Ferrari maintained a four point lead in Switzerland from McLaren, meaning they had a chance to win the Constructors Championship at their home race. McLaren would need a strong weekend to prevent the Italian team from doing so, while Williams and Renault also remained a threat in third and fourth. Brabham and Lotus were set to battle for fifth over the final two races, the latter holding an eight point lead over the BMW powered former.

The full entry list for the 1982 Italian Grand Prix is shown below:

Monza was expected to favour the turbo teams, and so it proved, with the Brabham, Renault and Ferrari cars leading the rest of the field by a significant margin.[2] The turbo field was expanded by Andrea de Cesaris, who was given a turbocharged Alfa Romeo to test around Monza, while Toleman released the TG183 in an attempt to aid their Hart powered toils.[1] Although the entry list totalled thirty cars (for the first time since the field visited Germany), there were no cars eliminated before qualifying.[1]

As with practice, the turbos led the way, with the tifosi in a particularly jubilant mood.[1] Despite not driving a turbocharged car before in 1982, Andretti claimed pole position, with team mate Tambay (still troubled with back pain) claiming third.[1] Nelson Piquet split them in his Brabham, while his team mate Riccardo Patrese beat the Renaults for fourth.[1] Rosberg claimed victory in the battle of the normal cars, beating the Alfa Romeos (as de Cesaris had returned to the normal V12 unit for the race),[1]

Rupert Keegan was the first of four drivers to be eliminated in qualifying, joined by March team mate Raul Boesel, Manfred Winkelhock in the ATS and Tommy Byrne's Theodore.[1] Incredibly, the 26 drivers that did qualify all recorded a time that was faster than the lap record, a feat that would not be matched in the future.

The starting grid for the 1982 Italian Grand Prix is shown below:

With Tambay deciding to race despite his trapped nerve (which continued to cause him pain) Ferrari were presented with their best chance of victory since the San Marino Grand Prix. With tifosi support and the most reliable car (at a track where engines were punished), the scarlet cars were assured for victory. It would be up to Renault and Brabham (whom continued to pursue their planned pitstops) to stop them, with Rosberg aiming for solid points to take the title.

Andretti had not had much practice at starting the turbo Ferrari, a fact shown as Nelson Piquet, Tambay and Arnoux (Alain Prost should have led but put himself on the grass and fell back) beat the American to the first corner.[1] Their duel saw Piquet pull ahead, although Arnoux would take the lead before the end of the first lap, with Piquet being sized up by Tambay, Riccardo Patrese (whom squeezed past Andretti at Lesmo) and Andretti before falling away.[1]

The first lap saw the British Isles' representation take a devastating broadside, as Derek Warwick spun to avoid Derek Daly at the second chicane, with Brian Henton collecting both to put the trio out of the race. At the front, Brabham's day ended early, as both Piquet and Patrese fell to clutch issues on the sixth/seventh lap.[1] Prost would be the next leader to fall (having battled back to third), a fuel injector causing his engine to fail (and indeed his title hopes).[1] This came after Rosberg suffered a rear-wing failure while battling Bruno Giacomelli, with the Finn recovering to the pits for repairs.

These various dramas meant the battles expected through the field dissolved, with the race becoming more processional as it progressed, with Rosberg the only man moving up the field (having returned to the race in 16th).[1] Arnoux kept the Renault running to take his last victory for Renault, while Tambay and Andretti ensured a double podium for Ferrari behind him.[1] John Watson, meanwhile, had benefitted from other's misfortune to sneak into fourth, meaning the championship would have to be decided at the final race.[1] Michele Alboreto and Eddie Cheever claimed the final points in fifth and sixth, as Rosberg battled to eighth.[1]

Three drivers left the final European race of the season with a mathematical chance of the title, although with Didier Pironi still lying in a hospital bed, the title fight was down to two. Keke Rosberg had to score just one point in Caesars Palace to win the title, while John Watson had to win, regardless of Rosberg's finishing position. Alain Prost and René Arnoux, arguably, should have won the title as the Renault RE30B arguably the fastest car on the grid, but would have to be content with battling with Niki Lauda and Patrick Tambay to finish in the top five.

Ferrari held an eleven point advantage in the Constructors Championship, with fifteen the maximum available in the Championship. McLaren sat in second, while Renault were on the fifteen point margin in third, with all three in with a mathematical chance of the title. But, it was Ferrari's to lose, with Renault's unreliability and McLaren's non-turbo machinery hindering their chances of the title.