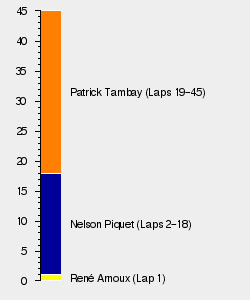 The 1982 German Grand Prix was the twelfth round of the 1982 Formula One Season, and saw the breakthrough win Patrick Tambay at the Hockenheimring.[1] The weekend was marred, however, by a huge accident for Championship leader Didier Pironi in qualifying, who was left fighting for his life having broken both of his legs.[1] This was the second time this had happened to Ferrari in 1982, following the tragic loss of Gilles Villeneuve in Belgium.

Tambay, for his part, performed spectacularly given the circumstances, taking the first win of his career at the team that had persuaded him to return to the Championship. Fellow Frenchman René Arnoux and Finn Keke Rosberg joined him on the podium, after Pironi had qualified on pole.

At Team Lotus, Nigel Mansell returned for the second time after his wrist injury in Canada, while Jochen Mass (whom was still recovering from his accident in France) was replaced by Rupert Keegan in the March.[1] Jan Lammers, meanwhile, lost his drive with Theodore, being replaced by Tommy Byrne, a promising talent in Formula Three.[1]

In the championship, Didier Pironi came to Germany with a nine point lead over John Watson, whom was going through a poor run of luck, having failed to finish the last two races. Keke Rosberg and Alain Prost were slowly closing the gap, with Niki Lauda keeping himself in the championship hunt. The two unknowns in the title fight were the two Brabham-BMW entries of Riccardo Patrese and Nelson Piquet, whom both had a win to their name, but were still getting used to turbo power.

McLaren, meanwhile, had a two point lead over Ferrari, whom had closed the gap significantly since Tambay had joined them. Williams had succumbed to Renault after their dominance of the French Grand Prix, with the French marque seemingly over their numerous reliability issues. Team Lotus, meanwhile, were in a fight with Brabham for fifth, with the latter's points split between their BMW and Ford Cosworth entries throughout the year.

In practice, Pironi enjoyed a huge margin over the rest of the field, proving that he was the man to beat for the weekend.[1] Tambay was also running well, with Hockenheim another track that decidedly favoured the turbocharged cars over their less powerful rivals.

Pironi had already guaranteed pole on Friday, a feat confirmed by the rain that greeted the drivers on Saturday.[1] Pironi was, however, still significantly faster than his rivals in the wet, but his session, and career, would be cut short during the session.[1] Thinking he only had Derek Daly in front of him, Pironi went for a pass, only to run into title rival Alain Prost, obscured by the spray.[1] The Ferrari launched into the air, landing back on its wheels, before slamming into the barrier at almost full speed.[1] Pironi was left fighting for his life, undergoing several operations to save both his legs and his life.[1]

Niki Lauda would also fall in qualifying, crashing into the wall and feeling too unwell to race.[1] He would be joined by Keegan and Byrne in their first qualifying session, as well as Teo Fabi in the Toleman.[1]

The grid for the 1982 German Grand Prix is shown below:

With Pironi unlikely to race again in the championship, the main focus would be who would take over the championship lead. Would Renault, with another (de facto) one-two start after Pironi's crash, build on their display in France three weeks earlier, or would it be Brabham on their third attempt of using the pitstop plan? These questions also applied to Patrick Tambay, who suddenly became team leader for the tifosi, despite his overall lack of experience.

With Ferrari failing to officially withdraw Pironi, Prost would have to be content with starting from second (despite being the highest placed car after qualifying).[1] He and Arnoux (who were still not on the best of terms) led into the first corner, but were soon overtaken by Nelson Piquet in the lightweight Brabham.[1] Piquet pulled ahead, a lead that looked to be increasingly impossible to overturn as the race unfolded.[1]

The race took an unexpected turn, however, when Piquet hit Eliseo Salazar on the 19th lap, putting both out of the race.[1] The Brazilian was less than impressed with the ATS driver, with Piquet physically attacking his opponent at the side of the track.[1] With their off-track brawl going on for a time (although Salazar was decidedly on the receiving end) Tambay took over the lead, having passed Arnoux and the tumbling Prost (who retired with an electrical issue early on).[1]

John Watson was up to third when he was struck by his third slice of bad luck in three races, retiring on the 37th lap with suspension failure.[1] Jacques Laffite was another driver to impress, swinging through the field to fourth in the Ligier (which had been too difficult to drive as recently as the British Grand Prix).[1] He was left disappointed, however, when he slid wide and damaged the side of his car, leaving him lacking the pace he had as he tumbled down the field.[1]

Tambay cruised to his first Formula One victory, maintaining a lead of over 15 seconds over second placed Arnoux (who was starting a late climb up the championship table).[1] Keke Rosberg took advantage of Watson and Laffite's problems to claim third, with the rest of the points handed to Michele Alboreto, Bruno Giacomelli (the Alfa, for once, reliable enough to complete a race) and Marc Surer.[1] Despite this result, however, Pironi retained his nine point lead at the top of the championship.

Didier Pironi remained in hospital for several weeks after his accident, but did not see his Championship lead fall in Germany, as John Watson failed to score again. Keke Rosberg now sat third in the table, three behind the Brit, while Alain Prost and Niki Lauda were not too far off. René Arnoux and Patrick Tambay had also dragged themselves into the title fight, although both were a long way off, Arnoux being 20 points behind.

Ferrari, despite potentially losing Pironi for the rest of the season, took the lead in the Constructors' Championship after Tambay's win, overtaking McLaren. Renault and Williams were beginning to draw in the British marque too, while Team Lotus retained fifth from Brabham. Arrows moved up a place courtesy of Marc Surer's point, moving past Osella.