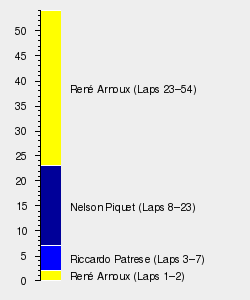 The 1982 French Grand Prix, hosted at the Circuit Paul Ricard, was the eleventh race in the 1982 Formula One Season.[1] The attendance in Paul Ricard was expected to be high, with Didier Pironi leading the Championship, Renault having what was widely regarded as the fastest car, and two French drivers in Ferrari (Pironi and the popular Patrick Tambay).

The race was won, from pole, by René Arnoux, with fellow Frenchmen Alain Prost and Didier Pironi completing the podium.[1] Arnoux and Prost would fall out after the race, with Prost pushing the fact that Arnoux should have allowed him past due to the title battle, a fact that Arnoux denied.

The single week between the British and French Grand Prix saw only one change on the driver front, as Nigel Mansell declined his Lotus seat in France due to his wrist injury (originally sustained in Canada).[1] Geoff Lees (whom had already driven for Theodore that year) took over the #12 John Player Special at France, in what would be the last race of his F1 career.[1]

Championship wise, the tide had turned in favour of Didier Pironi, who now led the title fight by five points, and had the benefit of a reliable car and turbo power. His lead over Alain Prost and Riccardo Patrese (the next turbo powered cars) was almost two race wins, with the calender appearing to favour turbocharged cars for the foreseeable future. John Watson and Niki Lauda were the closest to Pironi in points terms, but their McLaren MP4-1s were equipped with the less powerful Ford Cosworth engine.

But, McLaren remained in the lead of the Constructors Championship, still nine points away from Ferrari. Williams also found themselves in the top three, ahead of the second major turbo team (Renault). Brabham-BMW found themselves down in seventh, yet to beat their tally from their campaigning with the Ford Cosworth engine earlier in the season.

Practice revealed that the expected dominance of the turbo was to be confirmed, as the Renaults, Ferraris and Brabhams dominated the time sheets.[1] The Tolemans were also going well with their Hart built turbocharged engines, but were hampered by chassis issues which had plagued the car since its debut.

This display would be shown in qualifying, as the first six grid slots were filled by turbocharged cars (only the second time this had happened, the first being in South Africa at the start of the season).[1] As expected, the Renault team triumphed, with Arnoux claiming pole ahead of Prost, with Pironi (in the Ferrari) beating Riccardo Patrese (Brabham-BMW) for third.[1] The turbo group was completed by Patrick Tambay and Nelson Piquet, with the V12 engined Alfa Romeos of Andrea de Cesaris and Bruno Giacomelli lining up on the fourth row as best of the rest.[1]

The failures of qualifying included Jan Lammers, Colombian Roberto Guerrero and the two Brazilians Chico Serra and Raul Boesel.[1] They were almost joined by Lees, whom proved that a driver had to be fully fit to drive a Formula One car in 1982, scraping through in 23rd.

The Grid order for the 1982 French Grand Prix is shown below:

Ahead of the race, rumours arose that Arnoux and Prost had made an agreement, whereby Arnoux, should he be leading Prost in the closing stages for the win, would allow Prost (whom had a better points tally) to overtake, giving him maximum points.[1] This rumour would become a key focus of not only the race, but of the future their Renault careers.

The Renault's got off the line in grid order, pulling smartly ahead of the rest of the field over the first lap, Arnoux just keeping ahead of Prost.[1] Brabham, however, had other ideas, their lighter cars (using a pitstop strategy they had wanted to use in Britain) catching the Renaults in the early stages of the race.[1] Riccardo Patrese and Nelson Piquet worked together to pass Prost, with Patrese claiming the lead on the fourth lap (Piquet joining him a lap later).[1] Patrese's lead was short lived, however, as he fell victim to engine failure, leaving Piquet to fight alone.[1]

The Signes corner would, however, became a major talking point in the race, when it witnessed a huge crash on the 11th lap.[1] Jochen Mass and Mauro Baldi came together at the right hander at the end of the back straight, sending Mass into the barrier.[1] The force of his car hitting the armco sent his March over it, with Mass landing upside-down in a spectator area.[1] In a miracle that no one was killed, Mass' car caught fire as he emerged from it, with only minor injuries incurred by both spectators and driver.[1]

The race settled down, running in virtually the same order for the rest of the distance.[1] The only other major incidents to occur involved Piquet and John Watson, whom both retired through mechanical issues).[1] Piquet's demise handed victory on a plate to Renault, as Arnoux and Prost built a lead over the chasing Ferraris.[1]

At the line, Arnoux held a 17 second lead over his younger team mate, although Prost was furious that he had not been allowed past to claim victory,[1] Arnoux was adamant that he had not been ordered to do so (eerily similar to the Ferrari fallout earlier on in the season between Pironi and Gilles Villeneuve), with the two remaining at odds for the rest of the year.[1] Pironi had a quiet drive to third, while Patrick Tambay ensured a French 1-2-3-4 with another promising display in the second 'Fezza'.[1]

Didier Pironi now looked to be in command of the Championship after his home race, nine ahead of John Watson and with a handy looking Patrick Tambay looking set to help his title bid. That said, Alain Prost was now back in the fight, fourteen behind, and with René Arnoux demonstrating that Renault had overcome some of their fragility, there was still a potential fight to be had. Niki Lauda and Keke Rosberg would have to rely on the inherent turbocharger frailty (as would Watson) if they were to win the title, with the manufacturers now coming on strong.

McLaren just held onto their lead after the French Grand Prix, now just two points ahead of Ferrari. Renault had finally climbed back into the top three after their one-two, but still had a sixteen point gap to overcome before they could hope to be crowned Constructors Champions. They were also under serious threat from Williams (whom they overtook), as the top four looked to be breaking away from the rest. Tyrrell were the only other team to score in France, although Michele Alboreto's single point did little to adjust the standings.