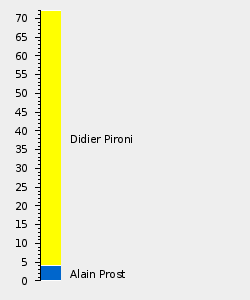 The 1982 Dutch Grand Prix was the ninth round of the 1982 Formula One Season, which saw Didier Pironi claim his last victory.[1] Formula One was still in mourning after the death of Riccardo Paletti in Canada, with safety questions being raised once again.

On a more cheerful note, the Zandvoort race saw a lot of action throughout, and also saw a surprise fastest lap by Derek Warwick.[2] Pironi was joined by Nelson Piquet and Keke Rosberg on the podium, as the Championship battle also became much tighter.

Questions were being raised after the disastrous start in Canada, where Riccardo Paletti had lost his life.[2] Murmurings that the start procedure would be changed went unfounded, but the mental change in Pironi (whom had two big crashes between the Canadian and Dutch Grand Prix) was visible for all to see.[2] Ferrari, meanwhile, announced that Patrick Tambay would finally drive in Holland, while Nigel Mansell (whom had broken his wrist in Canada) was replaced by Roberto Moreno in Lotus.[2]

Further down the field, Jan Lammers returned to drive for Theodore in his home race, while Osella raced only one car (with no-one to replace Paletti).[2] The two Toleman-Hart cars were also back on the grid, with the team testing while the rest were racing in North America.[2]

The Championship battle had been stretched out in Canada, with John Watson bringing a ten point lead (more than a race win) to the sand dunes of the Netherlands. Didier Pironi, Riccardo Patrese, Alain Prost and Keke Rosberg were all separated by four points, while Niki Lauda and Nelson Piquet could be perceived as slipping away.

Watson's team McLaren also held a comfortable lead in the Constructors Championship, leading Ferrari and Williams whom were tied on points. Renault were struggling with reliability, and came to Holland under serious threat from Brabham, although their points were being split between their BMW powered cars, and their Ford entries that had raced earlier in the season.

The return of the Tolemans boosted the entry list to 31 cars, meaning that practice returned to a pre-qualifying session. It would be the third March of Emilio de Villota who fell, with a trouble free practice for the leaders in the championship.[2]

Qualifying produced no surprises, as the Renaults took another front row (René Arnoux beating Alain Prost), with Pironi stalking them in fourth, behind the visibly happier Nelson Piquet in third.[2] Niki Lauda was the first non-turbo powered driver, while Eddie Cheever (with Ligier deciding to run the JS19 which the American struggled with), Teo Fabi, Roberto Guerrero and Moreno (who was not quite ready for the Lotus) all failed to qualify.[2]

Below is the starting grid for the 1982 Dutch Grand Prix:

There were no fresh concerns ahead of the Dutch Grand Prix, with all of the cars surviving the warm-up. The main question to be answered, however, was whether the Renaults would throw away another seemingly easy victory through unreliability, as they had already done at San Marino, Belgium, Monaco and Detroit.

Unlike in Canada, the race in Zandvoort got away cleanly, with Prost taking Arnoux off the line, while Tambay used his turbo to get ahead of Lauda and the slow starting Piquet (whom also fell victim to Pironi in the other Ferrari).[2] Before the end of the first lap, however, Piquet would have recovered to fourth, while PIroni got a good drive out of Bos Uit to take Arnoux on the start/finish straight.[2]

There would be more changes on the fifth lap, as Prost fell victim to the charging Ferrari, while Arnoux fell victim to Piquet.[2] At almost the same time, Rosberg carved his way past Niki Lauda, before dispatching of Tambay to become the next challenger to Arnoux.[2] The race settled down, with Rosberg slowly drawing up to the second Renault.[2]

This changed on the 22nd lap, however, as Arnoux's suspension failed heading into Tarzan, a wheel coming off the car, sending the Frenchman into a heavy impact with the barrier.[2] Despite the monocoque being split by the force of the impact, Arnoux emerged unharmed, while the race continued around the accident.[2] A few moments later, Arnoux's team mate fell victim to Piquet, before retiring three laps later with an engine failure.[2]

The order at the front remained unchanged until the end, with Pironi taking a crusie to victory ahead of Piquet, with Rosberg in third.[2] Lauda and Derek Daly held station in fourth and fifth respectively, while a late charge by Mauro Baldi in the Arrows saw him take Tambay and Alboreto to earn the final point.[2] Championship leader John Watson, meanwhile, had a quiet race to finish ninth.

John Watson saw his lead cut to just one point from Didier Pironi after the latter's victory, as Keke Rosberg overhauled Riccardo Patrese and Alain Prost for third. Nelson Piquet was also within striking distance of Prost, whom was paying the price for Renault's poor reliability once again, although not as much as Rene Arnoux, whom was tumbling even further down the table. Mauro Baldi added his name to the scorers list, adding a further point to the Arrows total.

McLaren still held a healthy lead in the Constructors Championship over Ferrari, although the Italians had cut a big chunk from it through Pironi's efforts. Williams sat in a consolidated third, well ahead of Renault, while the Brabham-BMW entry was now a couple of points behind the Brabham-Ford Cosworth entries' tally from earlier in the season. Team Lotus were tied with the former version on 17 points.

Retrieved from "https://f1.fandom.com/wiki/1982_Dutch_Grand_Prix?oldid=72578"
Community content is available under CC-BY-SA unless otherwise noted.