Formula 1 Wiki
Register
Don't have an account?
Sign In
Advertisement
in: 1982 Grands Prix, Detroit Grand Prix, Formula One races in the United States 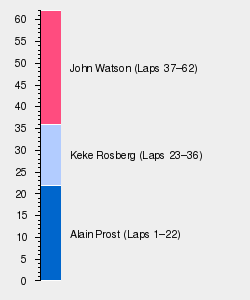 The 1982 Detroit Grand Prix saw Formula One make its début in "The Motor City" when the city hosted the seventh round on the 1982 championship.[1] The second of a record three races in the United States, the Detroit Grand Prix was intended to spread Formula One further across North America and its audiences.

The race witnessed some of the best performances of most driver's careers, none more so than John Watson, who came from seventeenth to win by over 30 seconds.[2]

Ferrari announced that Patrick Tambay would take over the deceased Gilles Villeneuve's seat, although the Frenchman would not compete in Detroit.[1] Talbot announced that they would be returning to running the older spec Ligier-Matra JS17, after the car they débuted at Monaco was banned for being unsafe to drive (as Jacques Laffite had complained).[1] The Toleman team also opted not to send their pair of cars over to the States, cost of shipping being the most likely reason.

Championship leader Alain Prost was still recovering from the crash he suffered in Monaco, with a bruised foot a potential problem for him around the streets of Detroit. Regardless, Prost went into Detroit with a one point lead, despite having failed to score since taking victory in Brazil. John Watson and Didier Pironi were his closest followers, with Keke Rosberg and maiden Grand Prix winner Riccardo Patrese also in touching distance.

McLaren held a seven point advantage in the Constructors' Championship over both Renault and Ferrari, with the French team coming under fire for their reliability problems. Williams were just a point behind in fourth, while Brabham, Lotus and Tyrrell looked to be set to battle for fifth throughout the season.

There were no major shocks in practice, although Jan Lammers was forced to withdraw after breaking his thumb in a crash.[1] This came after issues over the organisation of the new event meant that the planned Thursday practice had been cancelled (which had been intended to allow the drivers to learn the circuit better than normal practice time would have allowed).[2] A slightly reduced entry list meant that there was not a pre-qualifying session to reduce the field as had happened at the previous two meetings.

Qualifying itself was split into two sessions, although fears about rain saw the majority of times set in the first session, as chaos throughout the field caused spins and several surprise results.[2] Chief among these was defending World Champion Nelson Piquet, who failed to qualify for the race (joined by Emilio de Villota and the already withdrawn Lammers).[1] Watson scrapped through to take seventeenth, while his team mate Niki Lauda had only just managed to take tenth , although even their struggles couldn't explain the result at the front.[1]

Prost had taken (perhaps slightly unexpectedly given his foot) pole in the Renault, while Andrea de Cesaris, doing a lot to reverse the reputation he had earned for being unreliable, put the unfancied Alfa Romeo in second (his team mate Bruno Giacomelli claiming sixth).[1] Didier Pironi and Keke Rosberg took their usual second row slots, while Manfred Winkelhock surprised the entire field by putting his unfancied ATS-Ford Cosworth onto the third row, massively quicker than team mate Eliseo Salazar.[1]

The starting grid for the 1982 Detroit Grand Prix is shown below.

Riccardo Paletti missed the start of the race after an accident in the warm-up, while Prost was still suffering with the pain in his foot.[1] Nonetheless, the Frenchman would start the race from pole.[1]

The race around Detroit got off to a bang, with Raul Boesel and Mauro Baldi going off virtually at the start, with Winkelhock, rather disappointingly, joining them after a lap.[1] Jean-Pierre Jarier and de Cesaris were the next to go, before the race was halted on the seventh lap.[1] The Columbian Roberto Guerrero tapped the side of Elio de Angelis' Lotus going into the first corner, with Guerrero spinning into the barrier at turn one (de Angelis would survive until lap 18 when his gearbox failed).[1] Riccardo Patrese, unsighted as Watson and Jochen Mass moved to miss the accident, swerved around the spinning Ensign and slammed into the wall, his car catching fire shortly after.[1] The marshalls were untrained and hence unable to get the cars removed while the race went on, meaning the race was stopped for over an hour.[1] More importantly, however, none of the drivers were hurt in these incidents.[1]

The cars were made to do another standing start, with Prost again starting on pole (having had a rather painful first start with his injured foot), with Pironi now staring second and Keke Rosberg third (two of his nearest title contenders).[1] Rosberg jumped the Ferrari at the restart, but could do little to beat the Renault, which quickly established a lead over the Fin.[1] Pironi, meanwhile, was doing a good impression of a road block, holding Giacomelli and Eddie Cheever up for half the race distance, before the McLarens of Niki Lauda and Watson (who was storming through the midfield) joined the fray.[1]

Drama arose at the front, however, as Prost, on the twenty third lap encountered a fuel problem, drastically reducing the Renault's power, allowing Rosberg to fly past for the lead.[1] He gradually fell into the clutches of the Pironi passenger line, as Giacomelli lost a position to Lauda by getting on the power too early out of the second corner, barely managing to keep the Alfa on the road.[1] A few laps later, he would put himself out of the race by trying to retake sixth from the charging Watson, clipping the rear wheel of the Brit and breaking his own suspension.[1]

A majestic display by Watson followed, as he passed Lauda (who gave his team mate more than enough room to get past), Cheever and Pironi in a single lap, before catching and passing race leader Rosberg a few minutes later.[1] Lauda soon made his way past the Ligier and the Ferrari, before starting after the slowing Williams himself, only to retire after a clumsy pass on the Fin damaged his car.[1] Pironi, meanwhile, fell to Cheever, who then, with the red road block in tow, swung around the ailing Williams to take second.[1]

By the end of the race (which finished a lap early due to time constraints), Watson had built a thirty second lead to take victory, with Cheever taking his best ever career result in second.[1] Pironi took third having survived a tap from Cheever's team mate Jacques Laffite (whom finished sixth), while Rosberg and his team mate Derek Daly completed the points scorers.[1]

Alain Prost's five race run without points finally cost him the lead in the Championship, as John Watson and Didier Pironi climbed ahead of him through their podiums. Keke Rosberg and Riccardo Patrese held station in fourth and fifth, while Jacques Laffite became the newest face on the 1982 scoreboard through his strong weekend. Eddie Cheever was another winner, as he climbed into the top ten for the first time all season, displacing the late Gilles Villeneuve.

McLaren extended their lead in the Constructors' Championship after Watson's win, with Ferrari and Williams locked together on 26 (the Italians ahead on wins). Renault were being punished for poor reliability, and now sat in fourth, as Brabham and Team Lotus held station in fifth and sixth. Talbot Ligier's weekend had also been profitable, as they overtook Tyrrell through a double points finish.