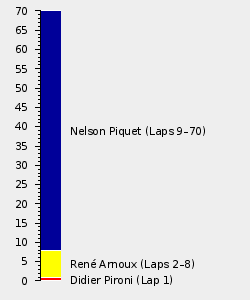 The 1982 Canadian Grand Prix, hosted at the newly renamed Circuit Gilles Villeneuve in honour of Canada's fallen hero, would go down as a black day for Formula One, after the death of Riccardo Paletti at the start.[1] Paletti smashed into the back of the stalled Didier Pironi breaking both his legs and succumbing to internal injuries later that afternoon.

Earlier, Pironi had paid tribute to his former team mate Villeneuve by dedicating his pole position lap to him, before missing out on victory to Nelson Piquet.[2] Piquet, winning for the first time with the BMW powered Brabham, was joined by team mate Riccardo Patrese and Championship leader John Watson.[2]

Patrick Tambay was expected to make his début for Ferrari at Canada, but the Italian team had not prepared a second car for the Frenchman in time (and were perhaps in favour of using the missing Ferrari to highlight their loss of Canada's greatest driver).[1] Jan Lammers, meanwhile, was given time off to recover from his broken thumb, with Geoff Lees stepping into the Theodore.[1] The two Toleman-Hart cars were both absent once again.

John Watson came to Canada in the lead of the Championship, after Alain Prost had been toppled for the first time in 1982 in Detroit. Didier Pironi had also snuck in front of Prost in the Championship, with Keke Rosberg and Riccardo Patrese in fourth and fifth. Niki Lauda and Michele Alboreto were the only other drivers in double figures for the season.

McLaren had extended their lead in the Constructors' Championship in Detroit, leading Ferrari and Williams. Renault, meanwhile, were now being punished for their poor reliability, having dropped from first to fourth in the space of two races. Brabham, Team Lotus, Talbot Ligier and Tyrrell were all in a battle for fifth, with Brabham running two different cars once again.

With the reduced field from Detroit all competing in Canada (held a week later), there was no need for a pre-qualifying field reduction.[1] The Canadian Grand Prix had often been held four months later in the year, however the switch to June meant better weather, a fact proved by the first warm and dry practice session held in Canada.[1]

Didier Pironi claimed an unlikely pole position for Ferrari, dedicating his performance to fallen foe Villeneuve, after Ferrari had developed a new suspension system for him.[1] He was joined by René Arnoux on the front row, with Alain Prost claiming third ahead of Piquet, whom had failed to qualify in Detroit.[1] Worryingly for Prost, however, was the fact that Pironi was over a second faster than him in quali-trim, as the turbocharged cars dominated the front of the grid.

Paletti, meanwhile, qualified for only the second time in his career (having been forced to sit out the Detroit Grand Prix after his car had been given to Jean-Pierre Jarier), while Manfred Winkelhock returned to form by failing to qualify.[1] He was joined by Emilio de Villota and Chico Serra.[1]

The grid for the 1982 Canadian Grand Prix is shown below:

There were, unusually for 1982, no pre-race withdrawals or breaking news stories that may effect the start of the race, which was set to be dry for its entirety.[4]

The worst part of the race would be the start, as Pironi stalled his Ferrari, with cars darting around him as the lights went green.[1] The earliest arrivals managed to get by without issue, but Raul Boesel, unsighted slightly, clipped the Ferrari, pushing it into the path of Riccardo Paletti, who slammed into the Frenchman at almost 100 kmh.[2] Pironi's car was sent into the Theodore of Lees, while the Osella wrapped itself around Paletti, leaving him trapped.[1] The race was stopped immediately, with Pironi sprinting across to help his fellow racer, with Sid Watkins (the famed F1 doctor) working to get the Italian free.[1] A thirty minute struggle to get Paletti out of the car followed (including a brief fire), although within two hours of the Italian leaving the circuit, news arrived of his death in hospital arrived in the paddock.[1] Osella opted to withdraw Jean-Pierre Jarier's car, while Pironi and Boesel climbed into their spares for the restart.[1]

The second start got off flawlessly, although it was immediately clear that Pironi was struggling, losing the lead to Arnoux, while Nelson Piquet overtook Prost for third.[2] Piquet and Prost soon each overtook Pironi, dropping the Ferrari to fourth. Further down, Nigel Mansell and Bruno Giacomelli came together at the hairpin, with the Brit suffering a broken wrist as both drivers went out of the race,[1] Pironi, meanwhile, would continue to slip down the field, with the spare Ferrari using an older suspension system that was not helpful around the Montreal circuit.[1]

Piquet took the lead on lap 9, with his team mate Riccardo Patrese (using a Ford Cosworth engine rather than the BMW in the back of the Brazilian's car), joining him on lap 29.[1] The race witnessed a majestic drive by the Italian, whom, like John Watson in Detroit a week earlier, carved his way from the back to the front, before putting Arnoux under pressure.[1] The Frenchman spun and stalled, removing him from the race (the turbocharged Renault difficult to start at the best of times), while his colleague Prost would join him on the side lines on lap 30 with an engine failure.[1]

A quiet race developed afterwards, with the Brabhams streaking away to finish first and second, with Andrea de Cesaris and Eddie Cheever running third and fourth, holding Watson and Derek Daly at bay.[1] However, with barely two laps to go, three of those four ran out of fuel, with Watson being promoted to third before the end, joined by Elio de Angelis in the Team Lotus car in fourth.[1] Marc Surer claimed his first points for Arrows by taking fifth, while the visibly frustrated de Cesaris, whom had defied his critics by running in third for more than half the race, was classified in sixth.[2]

It later emerged that Piquet had been driving with an oil radiator problem in the cockpit of his Brabham, causing 100 degree heat to burn his feet.[5] The Brazilian claimed that this was his greatest victory, despite the circumstances of the day, while also explaining his feelings about his race with his typical sense of humour.[5]

* Cheever, Daly and de Cesaris were still classified for completing 90% of the race distance, despite retiring.

John Watson saw his Championship lead extended to ten points, more than a race victory, over Didier Pironi, whom was now a single point ahead of Riccardo Patrese. Alain Prost was now fourth, with Keke Rosberg in close attendance. Nelson Piquet now found himself in seventh, still almost 20 points behind Watson, with Eddie Cheever, Michele Alboreto and Elio de Angelis all tied on ten points behind him. Marc Surer became the 22nd different scorer in 1982, also taking the first points for Arrows.

McLaren also extended their Constructors Championship lead through Watson's efforts, as both Williams and Ferrari failed to score. With Renault also failing to score, the big winners were Brabham, whom closed to within one point of the French marque, while their BMW partnership (classed as a seperate entry) climbed to eighth through Piquet's win.

Retrieved from "https://f1.fandom.com/wiki/1982_Canadian_Grand_Prix?oldid=88561"
Community content is available under CC-BY-SA unless otherwise noted.