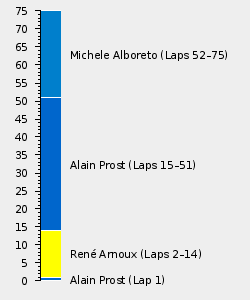 The 1982 Caesars Palace Grand Prix, held in Las Vegas, Nevada, was the final race of the 1982 Season, and also the third visit to the US that season.[1] The race would be a collection of firsts, as Michele Alboreto won his first Grand Prix, while Keke Rosberg won the World Championship.

Rosberg had arrived in the US with a nine point advantage over John Watson, with the Brit falling just short of victory at Caesars Palace, finishing second. With Eddie Cheever and Alain Prost in third and fourth, Rosberg took fifth to win the title, as Watson took second overall, beating the injured Didier Pironi through his two wins.

As the field set out for the Las Vegas Strip, the title battle for the driver's championship was rather simple: John Watson (on 33 points) needed to win with Keke Rosberg (on 42) failing to score.[1] In other words, it was Rosberg's title to lose (particularly with a decision pending about his disqualification in Brazil where he had finished third).[1] Although Didier Pironi sat on 39 points, he was out of the title race due to injuries suffered in Hockenheim (injuries which ended his career).[1]

The Constructor's Championship was slightly more complicated, with three teams (Ferrari, McLaren  and Renault) in the hunt. The Italians would win if one of their driver's took second, regardless of the other team's results. For McLaren, they had to score eleven points more than Ferrari (with a maximum 15 on offer) to take victory, while Renault had to take first and second and see the Italians fail to score a point.

Driver wise there were no changes, as Ferrari opted to give Mario Andretti his final bow in the no. 28 Ferrari 126C2 at his home race.[1] The 1983 driver list also continued to unveil itself, as Jacques Laffite announced his move to Williams, leaving Talbot Ligier to look for two new drivers.[1] Toleman, meanwhile, had continued to develop their new car after Monza, with Derek Warwick hoping to cover more than half a lap in Las Vegas.[1]

The full entry list for the 1982 Caesars Palace Grand Prix is shown below:

In practice, the turbos continued to dominate the field, as Renault seemed to hold the initative over Brabham and Ferrari.[1] With 30 entrants (the same field as in Italy two weeks earlier) there were no cars eliminated before the main qualifying session for the race.[1]

Practice translated into a one-two for Renault in qualifying, as Alain Prost (still annoyed after another retirement in Italy had cost him the championship) beat the departing René Arnoux to pole.[1] They beat the shock performance of Michele Alboreto in the non-turbo Tyrrell, who claimed third ahead of the equally impressive Eddie Cheever in the Ligier.[1] Riccardo Patrese put his Brabham into fifth, as Rosberg took sixth three places ahead of title rival Watson.[1]

Those made to miss the final showdown of 1982 included Jean-Pierre Jarier (whom crashed after he set his time), Teo Fabi (in the old Toleman), Eliseo Salazar and Chico Serra.[1]

* Jean-Pierre Jarier crashed during the session, with his team unable to rebuild his car for the race, meaning he was removed from qualifying.

The starting grid for the 1982 Caesars Palace Grand Prix is displayed below:

The post-qualifying break saw news emerge regarding the Constructor's Championship, as Patrick Tambay decided to withdraw from the grid due to his trapped nerve.[1] The Saturday race also lost Roberto Guerrero, whose day was ended by engine failure at the end of qualifying (with the team unable to get the new unit to start in time for the race).[1] Despite these casualties, the lights were set to go out for the final time in 1982, with the title still (mathematically) in the balance.

Ferrari’s bad day was set to get worse from the start, as Arnoux and Prost set off in the lead, Arnoux challenging Prost throughout the first lap before slipping into first on the second.[1] Andretti, meanwhile, was in a dangerous battle with the WIlliams duo and Riccardo Patrese (whom was surprised to be left behind by Michele Alboreto and Eddie Cheever in the opening stages).[1] Having an even worse start, however, was John Watson, whom slipped to twelfth on the opening lap.[3]

By lap 15, however, the order changed, as Watson rediscovered the form that had got him into the position he was in in the title battle to rise through the field.[3] Arnoux, meanwhile, fell behind Prost and soon retired with engine failure, as Alboreto and Cheever worked to keep Prost in their sights.[3] They were suddenly, however, under pressure from the charging McLaren of Watson, which had carved its way past Patrese, Andretti, Rosberg, Derek Daly and Nelson Piquet over the space of three laps (soon adding Cheever to that list as Alboreto began to make a solo charge on Prost).[1]

The order remained unchanged until the race entered the final quarter in distance, as Alboreto caught up to Prost's gearbox, poised to strike at any moment.[1] With Watson slowly creeping on the pair, Alboreto used his fresher tyres (Prost having worn his more and picked up debris that caused a vibration) to put himself in the lead for the first time in his career on the 53rd lap.[1] Within four laps, Watson had breezed past the Frenchman as well, although he began to struggle with tyre issues of his own, preventing him from catching Alboreto to the extent he had been.[1]

His efforts were, however, being proved futile, as the demise of Patrese and Andretti (both out with mechanical issues) meant Rosberg was in a safe fifth place, Daly acting as a distant tail gunner for him.[1] Alboreto held on for victory, with Watson having to settle for second in both race and championship.[1] Prost's pace fell enough that he lost out to future Renault team mate Eddie Cheever (the Frenchman putting up little resistance), with Rosberg claiming fifth to take the title.[1] Daly completed the points, with Ferrari taking the Constructor's championship despite not scoring (both McLaren and Renault failed to secure the points they needed).[1]

So, Keke Rosberg became the 20th Formula One World Champion at Caesars Palace, beating John Watson and Didier Pironi by five points. In a season which would be remembered for the tragic losses of Gilles Villeneuve and Riccardo Paletti, Renault would also have to bear the brunt of disappointment, as they failed to win either Championship, despite having the fastest car throughout the season. Alain Prost was left in fourth, with René Arnoux even further back.

Ferrari failed to score in the US, but still won the Constructors Championship, their seventh in total, as McLaren only managed to score six of the eleven points they needed to overhaul them. Renault claimed third, twelve behind the tifosi, while Williams clinched fourth, largely through Rosberg's tally. Team Lotus ended the season in fifth, with Tyrrell leapfrogging the Brabham-BMW entry and Ligier through Michele Alboreto's victory.

Retrieved from "https://f1.fandom.com/wiki/1982_Caesars_Palace_Grand_Prix?oldid=72228"
Community content is available under CC-BY-SA unless otherwise noted.