Formula 1 Wiki
Register
Don't have an account?
Sign In
Advertisement
in: British Grand Prix, 1982 Grands Prix, Formula One races in the United Kingdom 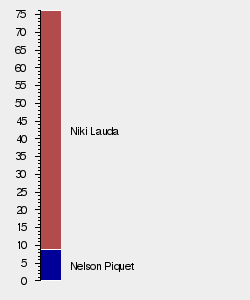 The XXXV Marlboro British Grand Prix was the tenth round of the 1982 Formula One Season, held at Brands Hatch in Kent, England.[1] The Kent circuit was expected to suit the turbo powered cars, with refuelling also set to return through the Brabham team.

The race was won by Niki Lauda for McLaren, although his team mate John Watson lost the championship lead after a spin to avoid an accident, having lost ground by avoiding the crash between René Arnoux and Riccardo Patrese at the start.[1] The Ferraris of Didier Pironi and Patrick Tambay joined the Austrian on the podium.

A huge crowd was anticipated when the F1 world headed to Kent in England, as John Watson lead the championship coming into the British Grand Prix weekend.[1] There were no changes on the driver front in the leading teams, although Brabham announced that they intended to race with pit stops, bringing refuelling equipment with them to Brands Hatch.[2]

Further down the field, Fittipaldi finished the development on their new car, with Chico Serra débuting the car at the British Grand Prix, although he would not race it.[1] At Team Lotus, meanwhile, Nigel Mansell was deemed fit to drive the Lotus 91 at his home race, with Roberto Moreno returning to his sports car duties.[1] March, in contrast, decided to drop the third car of Emilio de Villota.

The Championship had tightened significantly in the Netherlands, as John Watson saw his lead cut to a single point by Didier Pironi. Keke Rosberg, Riccardo Patrese, Alain Prost and Nelson Piquet filled the next places, separated by a handful of points. Prost, for his part, had been a constant victim of poor reliability, having failed to score since the second race of the season.

McLaren had retained their lead in the Constructors Championship at Zandvoort, although it had been reduced after Pironi's victory. Ferrari sat in second with Williams third, as Renault were falling victim to their well documented failures. Brabham, meanwhile, were classed as two entries, and their older results with the Ford Cosworth engine were being gradually being overhauled by their BMW powered results.

There were no major issues to report in practice, as Brabham did a few practice pitstops to improve their chances in the tactical war they wanted to wage.[2] The turbos, however, were under threat from the less powerful cars, led by the Cosworth contendors, with the Renaults surprisingly slow compared to their normal pace.[2]

This was demonstrated in qualifying, as Keke Rosberg shocked many by putting his Ford Cosworth engined Williams in the increasingly unfamiliar pole position slot.[1] It was not, however, too bad for the turbos, with Nelson Piquet and Riccardo Patrese putting their BMW powered Brabhams in third and second respectively.[1] Meanwhile, the eliminated list saw Manfred Winkelhock, Eliseo Salazar (both ATS), Jan Lammers (Theodore) and Raul Boesel, in the second March, have their names put on the reserve list as they failed to qualify.[1]

The starting grid for the 1982 British Grand Prix is shown below:

There were no fresh concerns ahead of the start of the British Grand Prix after qualifying, although Brabham were still unsure of their decision to refuel during the race.

There was drama on the parade lap, as Rosberg stalled on the grid, meaning he would (after charging round the circuit after he restarted the Williams) start from the back.[1] Riccardo Patrese became the highest placed car on the grid, but would also stall at the start of the race, attempting to signal a failure as the lights went out.[1] Arnoux slammed into the right rear of the Brabham, putting both out of the race (along with Teo Fabi as a wheel bounced in front of him), although, thankfully, neither was hurt.[1]

Pironi slithered the Ferrari around the Brabham before the accident, running second in the early stages behind Nelson Piquet.[1] He was soon passed by Lauda, while Rosberg used the chaos at the start to bring him up eight places on the first lap, before he began to take car after car over the following laps.[1]

A second significant accident came on the third lap, when Chico Serra hit Jean-Pierre Jarier, sending the Brazilian into the air.[1] His car returned to the circuit, but the speed carried it straight into the barrier which caused it to flip, with a visibly shaken, but unharmed Serra emerging a few seconds later.[1] A third car was also involved, the McLaren of John Watson (already hampered by having to drive across the grass as Arnoux and Patrese pulled onto it at the start).[1] Watson put himself into a spin by slamming onto the brakes to avoid the collision, but stalled as he slid down the grass, before being unable to restart the car.[1]

Piquet would lead until lap 11, when a fuel pump failed, handing the lead to Lauda, who continued to push thinking that the Brabhams were still in the race.[2] Pironi was up to second, although as the race approached half distance, Derek Warwick and Derek Daly began to climb the field, Warwick passing the Ferrari on the 21st lap.[2] Warwick ran in second until the 41st lap, when the unlucky Toleman driver suffered a broken drive shaft.[1] Elio de Angelis was promoted to third in the Lotus, with Pironi moving into second.[1]

Rosberg would tumble down the field with a pitstop, while de Angelis missed out on the podium by having to save fuel during the last laps.[1] Patrick Tambay (whom made an impressive move on Andrea de Cesaris at Druids to take fourth), took advantage to take third behind his team mate Pironi, and the winning McLaren of Lauda.[1] Daly held on to fifth while Alain Prost took his first point since the Brazilian Grand Prix by finishing sixth.[2]

First (and only) Fastest lap of Brian Henton’s career

Didier Pironi topped the table for the first time in 1982, and with form behind him, and a turbocharged Ferrari, it looked as though the Frenchman was now in Championship winning form. John Watson was now second with team mate Niki Lauda rising to third through his victory, leaping up from seventh. Keke Rosberg took fourth place after the British battle, with Alain Prost's first point in eight races saw him move ahead of Riccardo Patrese.

McLaren's lead in the Constructors Championship was slightly worn away by Ferrari, a four point swing in the Italian marque's favour through their double podium. Williams and Renault held station in third and fourth, while Team Lotus jumped both Brabham entries and sat in fifith. There were no points for any of the other teams in the Championship, meaning there was no movement in the bottom half of the table.