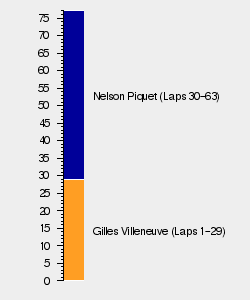 The 1982 Brazilian Grand Prix (officially named as the XI Grande Prêmio do Brasil) was the second round of the 1982 Formula One Season.[1] Jacarepaguá had originally been scheduled to host the third race of the season, but the 1982 Argentine Grand Prix was cancelled shortly before the season started in South Africa.

Pole man Alain Prost claimed his second victory of the season for Renault, in a race which saw old wounds opened between FISA and FOCA. Having never seen eye-to-eye, FOCA were to be outraged after the disqualification of Nelson Piquet and Keke Rosberg after the race, with their ultimate protest against FISA occurring at the 1982 San Marino Grand Prix.[1] Rosberg and Piquet, incidently, had finished first and second in the race before their disqualification.

The two month gap between the Brazilian and South African races was caused by the cancellation of the Argentine Grand Prix due to inflation in the South American country.[1] The break also allowed the GPDA/FISA Super License dispute to cool somewhat, after FISA's initial announcement that all the striking drivers in South Africa would receive a $10,000 fine, and a five race ban. FISA later accepted an appeal during the break, dropping the fine to $5,000 and a single race ban, which would also be suspended.[1] Time, however, could not heal all wounds, and the furore in South Africa also caused friction between FISA and FOCA, which would come to the fore after the conclusion of the Brazilian battle.[1]

With an almost two month gap between South Africa and Brazil, many of the teams had significantly developed their 1982 cars. Two manufacturer teams introduced their latest creations: Team Lotus unveiling the Lotus 91, and Alfa Romeo the Alfa Romeo 182. Further down the field, Ensign's N181 and Theodore's TY02 were also on target to make their débuts in Brazil. Brabham, meanwhile, had decided that their BMW powered BT50 needed more development after South Africa and the team used their old 1981 Brabham BT49 Ford-Cosworth configuration for Brazil.

After the South African race, it was clear that those cars with turbo powered engines had a significant advantage over the Ford-Cosworth machinery. Therefore many of the Ford-Cosworth teams arrived in Brazil hoping to exploit a loophole regarding the weight regulations by introducing water-cooled brakes.

The full entry list for the 1982 Brazilian Grand Prix is outlined below:

Practice allowed the crowds to see some new machinery on display, with Alfa Romeo, Ensign, Lotus and Theodore debuting their new cars. Instead of having a pre-qualifying to deal with the 31 car field, the FISA announced the slowest cars from the bottom team's in the constructors table of 1981 (Osella, Toleman and March) would have the slowest driver of the three teams be eliminated for the rest of the weekend. Osella's Riccardo Paletti was the unfortunate driver to fail to get into qualifying. [1] Regardless, the practice session was dominated by the turbocharged cars, with the Renaults coming out on top.[1]

30 drivers tried to produce their best lap to get one of the 26 grid slots available, with a dominant display by Prost to take pole.[1] He would be joined by Gilles Villeneuve on the front row, while Keke Rosberg and René Arnoux claimed third and fourth (Rosberg using an older Williams).[1] Niki Lauda beat Carlos Reutemann and Nelson Piquet for fifth, with Riccardo Patrese and Andrea de Cesaris completing the top ten.[1]

The full qualifying results for the 1982 Brazilian Grand Prix are outlined below:

Below is the grid for the 1982 Brazilian Grand Prix:

The qualifying result suggested that the turbocharged cars did not have the advantage that they held in South Africa, with Williams leading the challenge against the turbos.[1] Interest was also shown in Brabham, who were further down due to the fact they had swapped to Cosworth power from BMW.[1]

Gilles Villeneuve looked to be a man on a mission from the start, leaping ahead of Alain Prost before the first corner, the Frenchman dropping to fourth behind teammate Arnoux and Keke Rosberg. Lauda and Pironi followed with the two Brabham's of Piquet and Patrese in tow.[1]. Rosberg was the early charger quickly taking second from Arnoux before chasing after Villeneuve's Ferrari. However despite his ambition, Rosberg botched an overtake on Villeneuve and went wide dropping behind the Renault's of Arnoux and Prost. The Brabham's were running well, Patrese first disposed of Lauda's McLaren and then Pironi spun dropping him well out of contention as he went to pit for new tyres. Piquet followed Patrese through past Lauda and then the Brabham duo challenged Rosberg's Williams for fourth. The duo were soon past the Williams driver and then on lap 6, Prost whilst going into Norte corner went wide off the circuit and further promoted the Brabham's.

The Renault cars were clearly not as competitive as the cars behind them, Arnoux began to hold up the Brabhams whilst Prost was holding up Rosberg. As Rosberg overtook Prost, Piquet in a quick succession of laps overtook teammate Patrese and Arnoux's Renault. Both Piquet and Rosberg were the fastest cars on the track, once Rosberg had disposed of Prost it was only a short time before he was passed both Patrese and Arnoux. Both Piquet and Patrese therefore set off after Villeneuve's Ferrari who had up until that point been dominating out front.

Arnoux had meanwhile had a spin and had dropped behind Prost and Patrese and into the clutches of Lauda and Reutemann. Reutemann who had been having a frustrating race attempted a move on Lauda on lap 21, only to punt the McLaren driver off the circuit and into retirement. A lap later Reutemann attempted to pass Arnoux and surprisingly did the exact same thing, knocking the Frenchman out of the race. Despite eliminating two cars in the space of a lap, Reutemann did not appear damaged. However nonetheless he returned to the pits and then inexplicably hopped out of his car and immediately left the circuit much to the bewilderment of his Williams team.

At the front, Villeneuve, Piquet and Rosberg continued to furiously battle for the lead. Rosberg passed Piquet but then as he did at the start of the race, he botched his overtake on Villeneuve ran wide and Piquet overtook him. The three drivers engaged in a furious battle, none of them giving an inch all three driving on the ragged edge. Eventually it all ended in tears, Villeneuve distracted by the two cars behind him went wide and spun, nearly colliding with Piquet. The Canadian slammed into the barriers and was out of the race.

This meant the lead battle was reduced to just Piquet and Rosberg with the second Brabham of Patrese now closing in after disposing of Prost who was suffering from a misfiring engine and falling into the clutches of John Watson and Nigel Mansell. The heat and stressful nature of the race was getting to the drivers, on lap 34 Patrese mysteriously slowed and pulled off the circuit. He had passed out in his car and had to be lifted out of his Brabham by the marshalls.

His teammate Piquet was also suffering, propping his head up on one hand continuing on only due to his will to win his home race. Rosberg behind him and dropped back seemingly settled for second at his home race. Prost battled with Watson to maintain hold of the final podium place.

In the end an exhausted Piquet took the win ahead of Rosberg and Prost who had managed to fend off Watson behind him. Mansell was fifth in the debut race for Lotus's 91 chassis whilst Michele Alboreto gained his first points for Tyrrell.

The 1982 Brazilian race was undoubtedly one of Formula One's toughest races for the drivers to compete in. Piquet struggled out of his car and whilst on the podium he collapsed and fainted with exhaustion.

It had looked as though the political issues that surrounded the championship pre-race had blown over, until it was announced that Piquet and Rosberg had been disqualified for being under weight (a result of having "illegal water tanks").[1] Their disqualification was one of a number of reasons that led FOSA to boycott the 1982 San Marino Grand Prix a few weeks later.

Hence, Prost was given the fifth win of his career, while Watson and Mansell were promoted to the podium.[1]. Inheriting the minor points was now Alboreto in fourth, Manfred Winkelhock, in only his second race for ATS and Didier Pironi.

The full results for the 1982 Brazilian Grand Prix are outlined below:

Alain Prost gained a commanding lead in the Championship after his victory (confirmed after Keke Rosberg and Niki Lauda saw their appeals rejected later in the season), with an eleven point advantage over John Watson. Carlos Reutemann sat in third, while Nigel Mansell was a surprise fourth, tied on points with René Arnoux. A poor start for Ferrari meant that Didier Pironi was their only point scorer after the first two races, found down in tenth position.

Renault seemed to hold the initiative in the Constructor's Championship, leading McLaren by twelve points, with Williams in close attendance a further two points back. Team Lotus were in fourth courtesy of Mansell's podium, while Tyrrell led ATS and the tifosi at the tail end of the Constructors Championship of those that had scored.