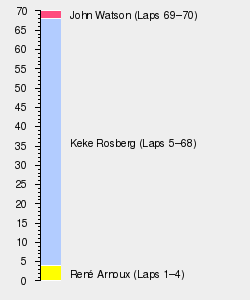 The 1982 Belgian Grand Prix was the fifth round of the 1982 season, held on May 9. It was won by McLaren's John Watson as the FOCA backed teams returned to the championship.[1] Keke Rosberg in a Williams and Ligier's Eddie Cheever joined him on the podium, as both Renaults retired once again.

Yet, this was overshadowed by the death of one of Formula One's stars of the era during qualifying. Late in the session Gilles Villeneuve, trying to beat team mate Didier Pironi's sixth place time, struck the back of a slower car and crashed heavily, suffering injuries on impact with the fence that would prove fatal. Ferrari withdrew Pironi's car in the aftermath, and would race with just one car for the next few races.

There were three major stories of note that occurred between the San Marino and Belgian Grand Prix. The first was that a meeting was held in Casablanca between FISA and FOCA, in which the two parties were set to negotiate terms. The boycott however was destined to end, McLaren broke ranks, their lead driver Niki Lauda most displeased at the situation of being unable to race in Imola effectively demanded to race in Zolder. Sponsorship demands eventually saw many of the other teams cave in and return to the grid for Zolder. The failure of the FOCA boycott, meant the disqualifications of Nelson Piquet and Keke Rosberg in Brazil were upheld.[1] The FIA also decided to keep the San Marino Grand Prix result as part of the championship, despite previous incidents which had been classed as non-championship events.[1]

After the tragic event the year before which saw the death of Osella mechanic Giovanni Amadeo due to an overcrowded pit lane, the race organisers spent $1.2 million in expanding the pit-lane to prevent the same overcrowding problems as the year before.

The big question between the US and Zolder was who would replace Carlos Reutemann at Williams. The Williams team had initially intended to persuade their one off replacement Mario Andretti to race whenever his CART commitments did not clash with Formula One. Andretti however was not interested in regularly participating in Formula One any more. The team then attempted to garner the interest of another former champion, Emerson Fittipaldi, who had retired in 1980. Fittipaldi was however committed to remain in charge of his own Fittipaldi F1 team. The team's test driver Jonathan Palmer was then slated to drive, however clashes with his Formula Two contract prevented the team from signing him. Other drivers such as Nigel Mansell, Jean-Pierre Jarier and Derek Warwick were all rumoured to be in the running for the seat, however it was Derek Daly who secured the race drive. Zolder would also see the début of the new Williams FW08 car which would see new lead driver Keke Rosberg and new team mate Daly partner up for the first time.

With Daly's departure from Theodore, the team signed up Jan Lammers who had been out of a drive since the beginning of 1981. The March team ran by RAM management expanded to three cars for the race. Alongside regular drivers Jochen Mass and Raul Boesel, the team invited Spanish racer Emilio de Villota who had made sporadic appearances in Formula One over the years to join the team. Marc Surer also returned to his Arrows seat, ready to begin his 1982 season after injuries sustained during testing for the 1982 South African Grand Prix.

But perhaps the most popular story (for fans) was the tension that had blossomed in Ferrari after the San Marino race, with Villeneuve staying true to his word in not speaking to his team mate Didier Pironi.[1] This story would become the dominant one as the weekend developed. There was a large support for Villeneuve where many in the paddock believed Pironi had betrayed his team mate by taking the race victory in Imola. The Ferrari management maintained a steadfast neutrality in the conflict and preferred to keep equality between Villeneuve and Pironi in the team.

The full entry list for the 1982 Belgian Grand Prix is outlined below:

With 32 entries, the practice sessions were morphed into a pre-qualifying session, which removed Riccardo Paletti and Raul Boesel from the main qualifying session.[1] At the front, the usual order remained, with Renault continuing to dominate in the pre-race sessions, while Ferrari's internal dispute continued to simmer in the background.[1]

Qualifying saw the internal struggle hit home, as Pironi and Villeneuve went head to head for the first time since San Marino. Pironi had the upper hand after their first runs, beating Villeneuve by 0.1s to take sixth.[1] Villeneuve headed out once again, desperate to beat his team mate and started a lap in the final few minutes of qualifying.[1] As the Canadian approached Butte he came across the slow Jochen Mass, deciding to move off the racing line to get past.[1] In the same breath, Mass yielded the racing line to Villeneuve, trying to keep out his way.[1] Villeneuve, with nowhere to go, slammed into the back of Mass' car, sending the Ferrari into a series of cartwheels that obliterated the car.[1] Villeneuve was ejected from the car, and sent flying into the crash fence, with John Watson and Derek Warwick abandoning their laps to help their fellow racer, although it was later revealed that Villeneuve had been killed by the initial impact after he hit Mass.[1]

Villeneuve was kept on life support in Louvain until the evening, where he died from his injuries.[1] Ferrari, by that stage, had already announced their withdrawal, with Pironi remaining as their only driver for the next two races.[1] The session was restarted after the debris had been cleared, with the Renault's taking another one-two on the grid.[4]

The full qualifying results for the 1982 Belgian Grand Prix are outlined below:

Ferrari's withdrawal promoted Jochen Mass (whose car was rebuilt overnight after the collision) and Mauro Baldi to the grid, a fact announced shortly before the start.[1]

The race began in dramatic style, as Nigel Mansell stalled (caused by a clutch issue that would cause him to retire a few laps later), meaning the 18 cars behind him had to take avoiding action. Unsurprisingly, two cars went for the same gap around the Lotus, with Bruno Giacomelli and Eliseo Salazar coming together and retiring (Salazar's ATS team mate Manfred Winkelhock retired with a clutch issue further round the opening lap). At the front, meanwhile, Prost dropped from first to third, with Arnoux and Keke Rosberg jumping ahead.[1]

Rosberg proceeded to attack the Renault that led him, having fended off Prost's best attempts to get past on the first lap.[1] Prost beginning to drop back into the clutches of Niki Lauda and Andrea de Cesaris. Arnoux and Rosberg's duel lasted for first four laps, until the leading Renault lost turbo pressure, forcing Arnoux into retirement and Rosberg into the lead.[1] Prost, meanwhile, was tumbling down the field, as Niki Lauda and Andrea de Cesaris (again upsetting his critics with a strong performance) took the second Renault.[1] Prost would soon fall behind Riccardo Patrese, John Watson and Michele Alboreto before the tenth lap.[1]

A calm came over the leaders, with no changes until the 29th lap, when de Cesaris took advantage of the spinning back marker of Chico Serra who had spun to move ahead of Lauda and into second, while Alboreto retired with an engine failure (a similar problem would claim his fellow Tyrrell racer Brian Henton a few laps later).[1] More changes followed six laps later, as de Cesaris suffered a third mechanical failure in three races to retire, while Watson slid his McLaren ahead of Patrese to take third, beginning the task of reeling in his Austrian team mate.[1]

The race became a tactical battle over the following laps, as Rosberg's rear tyres suffered from his exuberant style, while Lauda was slowly being drawn in by Watson. Lauda having wrecked his tyres avoiding the spinning Serra. Watson caught and passed the Austrian on the 47th lap, before making big gains on the Williams ahead in the last third of the race.[1] While their battle developed, Prost finally dropped out of the race after a spin, while Eddie Cheever began his climb through the field to fourth.

The race entered a tense final couple of laps, as Rosberg's tyres entered the final throws of their life as Watson pulled smartly up behind him.[1] On the penultimate lap, Watson took the lead, with Rosberg sliding wide.[1] Watson crossed the line a couple of minutes later, with Rosberg an increasingly distant second.[1] Lauda came home third but was disqualified for being underweight, promoting American Eddie Cheever to the podium (for the first time in his career) and Chico Serra into the points.[1]

John Watson leapt up the table after his victory, but still found himself one point short of Alain Prost's tally for the season, despite the Frenchman failing to score in the last three races. Keke Rosberg now sat in third, ahead of Niki Lauda, while Didier Pironi dropped to fifth. Michele Alboreto sat level with Pironi still, while Carlos Reutemann and the late Gilles Villeneuve remained in the top eight. René Arnoux, Riccardo Patrese and Eddie Cheever were in joint eleventh, having had an identical record to this point.

Renault were finally toppled from the top spot in the Constructors Championship, as McLaren overhauled them with Watson's win. Williams and Ferrari swapped places, while Tyrrell clung onto the top five, only one point ahead of Team Lotus. Ligier found themselves ahead of Brabham through Cheever's podium, while Fittipaldi secured what would become their last ever point in Formula One.