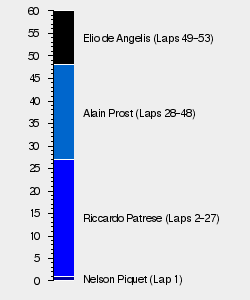 Championship leader Didier Pironi had fractured both his legs in qualifying for the previous race; thus, the title race was flung wide open, with John Watson, Keke Rosberg, Alain Prost and Niki Lauda all in contention.

As the race was expected to be dominated by turbo engines (which work better at higher altitudes), it was no surprise to see the Brabham-BMWs take the front row, with the top five cars all being turbos. Nelson Piquet was the Brabham driver who took pole, and fastest lap in the race, though teammate Riccardo Patrese lead the first half of the race before and engine failure lead him to crash in spectacular fashion, leaving Renault's Prost in a clear lead.

However, with five laps remaining, Prost slowed to a halt. This left Elio de Angelis with a opportunity to take his first ever victory in the non-turbo Lotus 91. However, Rosberg was closing fast, and De Angelis crossed the line just 0.05 seconds ahead, securing his first victory. It would also be a memorable day for Jacques Laffite, who claimed the final podium position for Ligier, who completed a non-turbo podium at the turbo-favouring circuit. Patrick Tambay, who obtained a puncture on the second lap, eventually fought his way to fourth place.

Pironi's lead in the Championship remained, but dropped to six points with Rosberg now in second place, and Watson in third. Ferrari managed to extend its lead over McLaren-Ford Cosworth by a point, to eight points.

News in the week between the German and Austrian Grand Prix revealed that Didier Pironi, who was left fighting for his life after a huge accident in qualifying at the Hockenheimring, would survive his injuries, although the likelihood of him driving in F1 again was in serious doubt.[1] Ferrari ran Patrick Tambay as their only entry in Austria, although the tifosi believed that their adopted Frenchman could claim a heroic victory, with the turbocharged cars expected to enjoy another significant power advantage over their rivals, as turbocharged engines work more efficiently at higher altitudes.[1]

The post-Pironi era in Ferrari also came to light during the break, with rumours emerging that René Arnoux had agreed to join Tambay for the 1983 season.[2] This move would be announced at the Austrian Grand Prix, but would not affect the 1982 championship, as Ferrari looked for a temporary replacement for the second car.[2]

Championship wise, Pironi still retained a nine point lead, with John Watson in second after three consecutive retirements. The initative seemed to be with Arnoux, whom had been on the best run in recent races, but is points deficit meant that Rosberg and Alain Prost were the most likely candidates to overtake the Brit and the Frenchman. Ferrari, meanwhile, brought (for the first time since the end of the 1979 season) a lead with them to the Österreichring, having overhauled McLaren in Germany.

McLaren struggled with tyre wear in practice, destroying their tyres over one qualifying lap.[2] Their problems were enhanced by the fact that the turbos, by virtue of the high altitude circuit, enjoyed a 150bhp advantage over their rivals.[1] Brabham were clearly in front, with Renault and Ferrari on an equal footing, while the Toleman-Hart combination showed promise.[2] The ever decreasing entry list meant that practice did not form a pre-qualifying session.

Brabham enjoyed a large margin in qualifying, with Nelson Piquet taking pole by three tenths from team mate Riccardo Patrese.[1] They enjoyed a second over the Renault and Ferrari, with Arnoux beating Tambay and Prost, with Keke Rosberg the best placed of the non-turbo cars in fifth.[1] Of the two days of practice, Piquet set his time on Friday, but most drivers set their best time on Saturday.

Tommy Byrne, in only his second entry for Theodore, managed to qualify for the race, a feat that the man he replaced, Jan Lammers, only achieved twice.[1] The three failures were Raul Boesel (March), Jean-Pierre Jarier (a surprise for the Osella team) and Eliseo Salazar (possibly recovering from the bruises inflicted by Piquet in Germany).[1]

So could Brabham, with their best grid start of the year, finally get a chance to try their refuelling strategy, which had, so far, been disrupted by crashes and retirements? Would Tambay take his second win in a week to ensure he would be the lead driver next year with the imminent arrival of Arnoux? Or could Williams or Lotus (the best of the rest) take advantage of the delicate nature of the turbo cars to take victory. Time would tell, with a 53 lap race around the Österreichring to answer these questions.

There was drama from the start, as Andrea de Cesaris and Bruno Giacomelli smashed their Alfa Romeos into each other off the line, causing both to retire.[2] Their coming together also claimed Derek Daly (whom had nowhere to go), and also had an effect on the leaders, with Tambay picking up a puncture on the second lap from the debris.[1] At the front, meanwhile, the Brabhams (with only half the fuel of their competitors) quickly pulled away, as Riccardo Patrese dived ahead of Nelson Piquet early on.[1]

Michele Alboreto crashed heavily on the second lap, although it was unclear if he was aided into the barrier by Rupert Keegan (whom also retired with accident damage).[2] The race continued unabated, with the Tolemans next to fall with mechanical failures (unrelated) on the seventh lap.[2] The order at the front remained unchanged until the 15th lap, when Arnoux pulled off with another mechanical issue (this time turbo flavoured) as the Renault once again showed it was prone to failure.[1]

Piquet became the first driver to have a pre-planned pitstop in the 1980s when he pitted on the halfway mark, with Patrese coming in a lap later.[1] Piquet fell to fourth, but could not pull away from Keke Rosberg (the cars now with equal fuel), while Patrese held on to his lead.[1] Things got worse for Brabham when Patrese suffered an engine failure on lap 31, while Piquet fell down through the field (ultimately retiring with a damage camshaft).[1] It was advantage Renault at the front, with Alain Prost leading over Elio de Angelis in the Lotus 91, with Keke Rosberg closing the gap to the Italian in third.[1]

Further down, Tambay was making short work of the non-turbo cars to climb back into the points, as Rosberg continued to close on De Angelis as the race entered its final phase.[1] It seemed that they would be battling for second, until Prost pulled off with an engine fire, promoting the young Italian to first.[1] Rosberg was on his tail by the final lap, jinking either side but unable to get past the Lotus.[1] Out of the final corner, Rosberg carried more speed, pulling alongside De Angelis as they came to line.[1] Fortunately for the Italian, however, they crossed the line with De Angelis half a car length ahead (0.05s according to the official time keeper), meaning he had won for the first time in his F1 career.[1]

Behind their duel came the Ligier of Jacques Laffite, whom had had a quiet race to creep onto the podium (mainly through retirements).[1] Tambay stood out with an impressive recovery drive to take fourth, with Niki Lauda (another driver having a quiet day) finishing fifth.[1] Mauro Baldi battled to only his second championship point in the Arrows by claiming sixth, with his name on the lips of many to join a top team in 1983.[2]

* Prost was still classified despite his engine failure five laps from the finish.[1]

After his second place finish, Keke Rosberg went up into second place in the championship and in the process closed the gap from Didier Pironi to six points, and pushed John Watson into third. Niki Lauda gained fourth from Alain Prost after his fifth place, while Jacques Laffite climbed seven places in the standing's courtesy of his podium finish (leaving Austria in seventeenth).

The Constructor's Championship saw Patrick Tambay increase Ferrari's lead to eight points over McLaren, themselves now ten points ahead of Williams. Williams, meanwhile, over took Renault to take third in the same championship, while furtherdown, Laffite's podium pushed Ligier above Tyrrell for eighth.

This article is a featured article.
This was the Formula 1 Wiki's Featured Article on 1 January 2015.