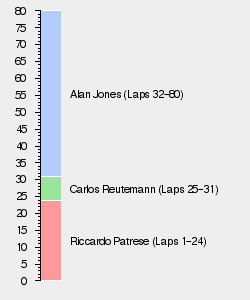 The 1981 United States Grand Prix West was the first round of the 1981 Formula One Championship. The race was won by reigning champion Alan Jones with teammate Carlos Reutemann in second place. The Brabham of Nelson Piquet finished in third place.

The United States Grand Prix West was originally scheduled to be the third round of the championship. However, due to the delay of the Argentinian race and the loss of world championship status of the South African Grand Prix following the disputes between FISA and FOCA, the Long Beach race happened to be the first race of the season. The FOCA teams hoped to form a breakaway series for 1981, running the 1981 South African Grand Prix to seperate regulations from the FIA. However following low popularity in South Africa for viewers due to the lack of manufacturer teams such as Ferrari, Renault and Alfa Romeo who continued to support the FIA, Bernie Ecclestone and FOCA caved in and rejoined the FIA Formula One World Championship.

For 1981, skirts that had been producing the ground effect which had been the key to success in Formula One since 1978 was banned by the FIA. Reigning world champions Williams maintained its 1980 driver line-up of reigning champion Alan Jones and Carlos Reutemann. Reutemann winning the non-championship race last time out in South Africa. Brabham retained Nelson Piquet and Héctor Rebaque. Rebaque recovering from Hepatitis that had caused him to miss the race in South Africa.  Jean-Pierre Jabouille had signed for Ligier for 1981, the team returning to the use of Matra engines, however since Jabouille had still not recovered from his injuries sustained in the 1980 Canadian Grand Prix, Jean-Pierre Jarier was called into replace him until he was fit enough to return. Long time Ligier driver, Jacques Laffite remained in the team for 1981. After a poor 1980, Lotus had lost Mario Andretti to Alfa Romeo, the team replacing him with Nigel Mansell who had made his debut with the team the previous year. Elio de Angelis remained in the team for 1981.

After a disaster of a season in 1980, McLaren had become increasingly under the control of Ron Dennis, determined to return the team to its winning ways for 1981. The team had lost its young talent Alain Prost to Renault for 1981, however he was replaced by another young talent, Andrea de Cesaris who was to line-up alongside veteran driver John Watson. Another front runner that suffered in 1980 was Ferrari. Gilles Villeneuve remained in the team whilst Didier Pironi moved from Ligier to take the place of the retiring Jody Scheckter. Arrows continued with Riccardo Patrese being partnered in 1981 with new driver, Siegried Stohr.Tyrrell had a new driver line-up for 1981, Eddie Cheever had moved to the team from Osella. Ken Tyrrell's team had yet to confirm a full time driver in time for the first race of the season, the team using CART driver Kevin Cogan for the Long Beach race.

In Fittipaldi, Emerson Fittipaldi had finally retired from racing and instead moved into the management of the team. His place in the team was taken by Brazilian racer Chico Serra who partnered the team's rising talent Keke Rosberg. Marc Surer had moved to ATS to Ensign, whilst Jan Lammers swapped places with Surer moving to ATS. After a year out of Formula One, competing in Can-Am ( and becoming the series champion ), Patrick Tambay returned to F1 with the Theodore team. The team rising from the ashes of what was the Shadow team. Osella had a new driver line-up of young drivers Beppe Gabbiani and  Miguel Ángel Guerra.

The full entry list for the 1981 United States Grand Prix West is displayed below:

Gilles Villeneuve got a flying start from fifth on the grid to move ahead of Riccardo Patrese lead on the run down to the Queen's Hairpin. However the Canadian was too late on the brakes and went wide into the first corner, dropping down to sixth. Further down the field, the cars were bunched up in the mid-field. In this overcrowding, Alain Prost's first race for Renault would end having been squeezed out in the braking zone, leaving the Frenchman no room to manoeuvre. Tipped into a spin, he subsequently collided with Andrea de Cesaris's McLaren, taking both cars out of the race.

Villeneuve had lost the lead, however Ferrari had demonstrated the superiority of its engine with teammate, Didier Pironi having also made a fantastic start, speeding ahead of his competitors down the Shoreline Drive. However like Villeneuve, the bottleneck of the field at Queen's Hairpin would prove hazardous, Pironi would be squeezed far to the inside of the hairpin, leaving some of the opposition to claw back some of their lost position.

Prost's Renault would be left stranded near the apex of the hairpin, giving the marshalls a fast effort to remove the stricken Renault before the cars returned for the next lap.

"Watch for the scarlet Ferrari, because they were out of contention all last year, its the new turbo car"

At the end of the first lap, Patrese led the field ahead of Jones, Reutemann, Villeneuve, Piquet and Pironi. On the second lap, Reutemann overtook Jones for second. The order then began to stabilise as Patrese began to hold a consistent lead over the two Williams cars.

"Number 29, Riccardo Patrese leading, comes from Padova in Italy and is the unofficial sportscar champion of the world"

Within the first opening laps, Villeneuve dropped to sixth and the second Brabham whom comparison to his teammate Piquet who held fifth, Hector Rebaque was already being lapped. On lap ten, Andretti overtook Cheever to take seventh position from the Tyrrell driver. At this The seventeenth lap saw Pironi make a move on Piquet to take fourth position. Things went less well for his Ferrari teammate Gilles Villeneuve. Having been overtaken by Piquet, subsequently retired with

halfshaft failure whilst racing in fifth position. Patrese who was at the time enjoying a comfortable lead of the race then began to falter on lap 25 with fuel feed problems. Reutemann quickly began to close in on the lead. There was a challenge at Queen's Hairpin, however Reutemann lacked the dare to overtake. The following lap, Reutemann began a more aggressive challenge around the outside, however Patrese continued to hold firm in his position. The following lap, with Jones slowly closing in, Reutemann made a much more aggressive challenge down the Shoreline Drive to take the lead from Patrese. A few laps later Jones made an attack into the Queen's Hairpin and was through into second place. Increasingly losing power, Patrese headed to the pits where he dejectly sat in his Arrows as his mechanics operated on his car. The mechanics would send him out again, however he was now well out of contention as a race leader.

Patrese returned to the track, just ahead of the leading Williams cars, he began to make it ahead of a fellow backmarker as he tried to escape the inevitable lapping from his former track competitors. Reutemann now leading would have the concern of teammate Jones behind him as well as a notoriously historically difficult Patrese to lap as a backmarker. Patrese, however would be submissive and allowed the two leaders through without much issue.

At this point in the race, the two Williams cars were dominating with Piquet third, holding a two second lead over fourth place Pironi. The final two points positions would provide cheer for local fans as two North American drivers, Eddie Cheever and Mario Andretti held the final points positions.

Whilst lapping Marc Surer's Ensign, Reutemann went wide and off the circuit where he dropped behind Jones who inherited the lead of the race. Further back Andretti then lost sixth to Jacques Laffite's Ligier. Patrese meanwhile returned to the pits, his mechanical trouble had truely taken the fight out of him.

Jones meanwhile would now have the challenge of leading lapping the backmarkers, Reutemann still looming behind. Jones visibly demonstrating a confident overtake on the backmarker of Hector Rebaque.

Cheever began to drop back with tyre trouble and came under the pressure from Laffite. Laffite attempted to overtake on lap 41 where he slammed the front of his Ligier into the back of Cheever's Tyrrell. The Frenchman saw his nose cone bent upwards where he was forced to come into the pits to retire. The same lap Bruno Giacomelli and Jan Lammers had a major coming together, both drivers exited their wrecks unhurt and walked back to the pits.

The following lap, Mario Andretti overtook his fellow American Eddie Cheever to take fifth position. Andretti then began to chase down Pironi, whilst Andretti's Alfa Romeo was faster in the corners, Pironi's new turbo charged Ferrari proved faster on the straights. Andretti was finally able to overtake Pironi in the later stages of the race. Pironi began to drop further back as he continued to suffer from engine troubles. Cheever was then also able to move ahead of Pironi to take fifth position. Pironi would then retire on lap 67 when his engine troubles became terminal.

As the race concluded, Alan Jones started his title defence in the best possible way by winning the opening round of the championship. Reutemann took second making it a Williams 1-2 with Nelson Piquet in third position. It was a good day for the American fans as Mario Andretti and Eddie Cheever were fourth and fifth. Patrick Tambay on his return to F1 racing took the final point for Theodore who managed to score points on the team's debut.

Retrieved from "https://f1.fandom.com/wiki/1981_United_States_Grand_Prix_West?oldid=96408"
Community content is available under CC-BY-SA unless otherwise noted.