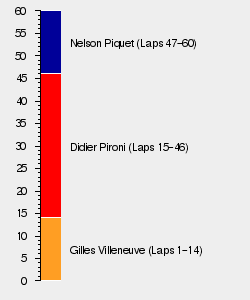 In 1980, the Italian Grand Prix was held for the first time in Formula One's history held at a circuit other than Monza. Contract disputes between the circuit and the FISA had prevented Monza from hosting a grand prix that year and after much outrage the event was moved to the Imola circuit for 1980. Despite the uproar from the fans at the loss of Monza, the Imola circuit proved to be a popular venue in 1980 and was seen by fans as a topline grand prix track. With the Italian Grand Prix returning to Monza in 1981, the FISA sought to implement Imola onto the calendar by giving it a separate grand prix title, lining it as the San Marino Grand Prix.

The consistency of Carlos Reutemann in the opening rounds meant that he was leading the world championship on 21 points, three points clear of teammate Alan Jones. Nelson Piquet was in third place in the standings, his controversial but innovative Brabham with its hydro pneumatic suspension was proving to be the fastest car on the grid. However with the European season beginning, most teams had began to fit their own version of the hydro pneumatic suspension onto their cars which questioned how superior the Brabham would be in San Marino.

With the Lotus 88 repeatedly being declared illegal by the FISA, Lotus had withdrawn its cars from the San Marino event. Instead the team remained in England with Nigel Mansell and Elio de Angelis testing a new and revised Lotus 87 designed to succeed the reject 88 chassis.

There was a new team on the grid in Imola, the Toleman team ran by Ted Toleman and Alex Hawkridge would enter the grid as a new competitor in Imola. Toleman had been competing for a number of seasons in Formula Two and had decided to advance to the major league in Formula One. The Toleman TG181 was designed by Rory Byrne and was uniquely powered by a turbo charged Hart engine rather than the usual customer bought Ford-Cosworth DFV. Toleman would enter the same line-up it had used in the 1980 Formula Two Championship which had seen Brian Henton winning the F2 championship with teammate Derek Warwick second in the standings. Henton had competed in F1 sporadically in the past, however he had not competed since 1977, four years previously. Warwick on the other had would be making his Formula One debut in Imola.

Other driver changes in Imola saw ATS expand to two cars with Swedish driver Slim Borgudd joining Jan Lammers in the team. Borgudd at the time served as pop music band ABBA's drummer. As a result the team ran ABBA logos on Borgudd's car. Ricardo Zunino had been replaced at Tyrrell by the reigning Formula Three champion, Michele Alboreto a young Italian driver who was proven to be both fast as well as having enough cash to fund the financially struggling Tyrrell outfit.

The full entry list for the 1981 San Marino Grand Prix is displayed below:

As was typical of the faster circuits such as Imola, the turbo charged cars typically performed well in qualifying. Practice and qualifying notably saw an improvement in pace from Ferrari, the team competing as a front runner once again for the first time since 1979. Gilles Villeneuve took a comfortable pole position for the team with Carlos Ruetemann doing well to pit his Williams on second the grid. The turbo charged Renault's of René Arnoux and Alain Prost were third and fourth whilst Nelson Piquet lined up fifth. Didier Pironi took sixth, John Watson in the new McLaren MP4/1 was seventh, Alan Jones a disappointing eighth ahead of Riccardo Patrese and Jacques Laffite.

Miguel Ángel Guerra qualified for his first Formula One race starting from twenty second as did Eliseo Salazar who started a position behind him. Slim Borgudd on his first attempt to qualify the ATS managed to break onto the last grid position whilst teammate Lammers failed to qualify. Alongside Lammers was Siegfried Stohr, Derek Daly, the two Toleman's of Derek Warwick and Brian Henton as well as Chico Serra's Fittipaldi.

The Sunday morning saw heavy rain sweep the circuit, however by the time the race was ready to get underway the rain had subsided. The track remained very wet and all the cars bar Marc Surer's Ensign started the race on wet tyres. The start saw Gilles Villeneuve maintain his lead whilst behind him, Didier Pironi and Alan Jones got flying starts, Pironi was up to second to make it a Ferrari 1-2 whilst Jones was now in fourth position behind Williams teammate Carlos Reutemann.

At the tail end of the field there was carnage going into the Tosa hairpin. Eliseo Salazar's March slammed into the back of Miguel Ángel Guerra's Osella. Guerra was pitched into the wall suffering a broken wrist and ankle. The front end of Guerra's car had been completely destroyed and the injured Guerra had to be cut from his car by the marshalls in order to be free of his wreck.

Jones and Reutemann diced for third, at the end of the first lap Jones made his move on Reutemann, only for the Argentine to angrily shut the door on Jones and in doing so damaging the latter's front wing. Jones then dropped behind Riccardo Patrese's Arrows before heading to the pits for a new front wing. Jones changing onto slick tyres in the stop. A few laps later Patrese was up to third when Reutemann went wide at the final corner and let the Arrows driver through.

Alain Prost became the first of the frontrunners to drop out, the gearbox on his Renault seizing and forcing him out on lap 3. A lap later Prost's teammate Arnoux spun from fifth losing a place to Piquet's Brabham. Soon enough the second Brabham of Rebaque had also passed Arnoux. The same lap John Watson was forced into the pits from seventh after spinning and damaging his nose. Watson notably rejoining the track on slick tyres.

Meanwhile up front, the Ferrari's of Villeneuve and Pironi continued to dominate. On lap 14, Villeneuve made the surprising decision to come into the pits and pit for slick tyres. The move to slick tyres turned out to be a disaster for Villeneuve, two laps after pitting a light shower hit the circuit forcing him to return to the pits for wet tyres. The shower had also further damaged the race of Watson, Jones and Surer who were all also on slick tyres, the three being forced to return to the pits as well.

Piquet was now the car on the move, overtaking Patrese for second and then beginning to chase down Pironi who held a considerable lead in his Ferrari.

Bruno Giacomelli and Eddie Cheever then had a coming together on lap 28, Giacomelli had slammed into the back of Cheever sending both cars into the barriers. Giacomelli had earlier been causing trouble making it difficult for Andrea de Cesaris's McLaren to pass.

Pironi had began to suffer performance issues with Piquet climbing upon the Ferrari's rear. Pironi refused to relinquish the lead and the two drivers battled lap after lap, neither driver's giving an inch. On lap 47, Piquet finally was able to take the lead from Pironi, the Ferrari driver immediately falling back. The following lap, Patrese had overtaken Pironi for second and then a few laps later Reutemann had also moved ahead of Pironi. A final blow to Pironi's day saw Rebaque's Brabham overtake Pironi to take fourth place. Andrea de Cesaris did well to finish the race in sixth position and take his first points at his home grand prix.