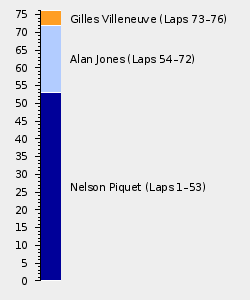 The 1981 Monaco Grand Prix was the sixth race of the 1981 Formula One season. Gilles Villeneuve won the race for Ferrari, taking the team's first win since 1979.

Heading into Monaco, Carlos Reutemann continued to enjoy a comfortable lead in the world championship on 34 points, however Nelson Piquet was slowly creeping closer in the standings, now only 12 points behind the Williams driver. Reigning champion Alan Jones in the other Williams was three points behind Piquet whilst Riccardo Patrese was impressing with his consistency to sit fourth in the standings for Arrows. The consistent success of the Williams paring of Reutemann and Jones meant that Williams had an enormous points advantage in the constructors championship, sitting on 58 points in comparison to nearest challenger Brabham's 25.

The Formula One grid had expanded to 31 cars, the overcrowding of the pits had been the cause of tragedy with the death of an Osella mechanic in the previous round at Belgium. As a result the even more tightly packed and congested circuit of Monaco would host a pre-qualifying session ahead of the usual qualifying session in order to downsize the field. Monaco would only host 20 cars in the race as opposed to the usual 24 due to its congested nature. This meant 11 cars would fail to make it onto the grid for the Sunday race.

The full entry list for the 1981 Monaco Grand Prix is outlined below:

The full pre-qualifying results for the 1981 Monaco Grand Prix are outlined below:

In contrast to Rebaque, teammate Nelson Piquet took the pole position. Gilles Villeneuve put in a strong performance for Ferrari to take second whilst behind him came Nigel Mansell, Carlos Reutemann and Riccardo Patrese.

Nelson Piquet maintained his lead at the start with Gilles Villeneuve, Nigel Mansell, Carlos Reutemann and Alan Jones in hot pursuit. Andrea de Cesaris and Mario Andretti collided at St Devote forcing both drivers out of the race. Piquet and Villeneuve began to pull away from the pack whilst Mansell's Lotus had began to hold up Reutemann behind him.

Mansell and Reutemann duelled for a number of laps, however Reutemann's Williams was unable to find a way past the young Brit. Mansell's strong drive was brought to an end on lap 16 when he suffered suspenson failure. A number of retirements followed, Riccardo Patrese went out on lap 29 from sixth with gearbox troubles. Elio de Angelis inherited his position but then three laps later retired with engine troubles. The same lap René Arnoux crashed his Renault into the barriers. Carlos Reutemann who had been released from the slower Mansell had managed to catch up to the two leaders of Piquet and Villeneuve only to retire on lap 34 with gearbox troubles.

This meant Alan Jones was left as the sole remaining Williams, where he began to put pressure on Villeneuve whose Ferrari was beginning to suffer from handling and performance issues. After three laps Villeneuve conceded the position and Jones began to chase after his old rival Nelson Piquet.

Lower down the field, Alain Prost retired from fifth with engine troubles on lap 45 and five later Bruno Giacomelli and Michele Alboreto collided putting themselves out of the race. As this occurred Jones had caught up to Piquet and had began to apply the pressure.

On lap 53, as Piquet attempted to lap a backmarker he spun off the circuit and hit the barriers, bringing his race to a premature end. Jones therefore enjoyed a comfortable 30 second lead over the crippled Villeneuve in second place, the win was there for the taking. However disaster struck for Jones when his engine began to misfire.

With nine laps to go, Jones came into the pits on lap 67. The mechanics noticing air bubbles in Jones's fuel could not fix the problem and sent Jones back on his way. Jones exited the pits still in the lead although was now only six seconds ahead of Villeneuve behind him. Both Jones and Villeneuve battled mechanical troubles, however this did not deter Villeneuve from closing on Jones. The race was heading for an excellent climax as Jones and Villeneuve duelled for the lead. With four laps to go Villeneuve made his move and the Ferrari driver took the lead of the race. A euphoric Villeneuve then began to pull away from the now dejected Jones at a rapid pace. Villeneuve took the flag, a full 30 seconds ahead of Jones. A minute and a half behind Villeneuve was Jacques Laffite's Ligier. Didier Pironi secured more points for Ferrari with fourth whilst Eddie Cheever was fith and Marc Surer sixth. The smaller teams of Tyrrell and Ensign getting some much needed points in the race.

Retrieved from "https://f1.fandom.com/wiki/1981_Monaco_Grand_Prix?oldid=80913"
Community content is available under CC-BY-SA unless otherwise noted.