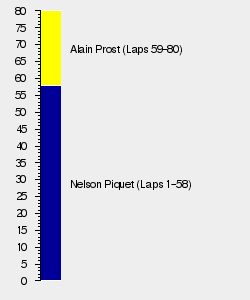 The 1981 French Grand Prix was the eighth round of the 1981 Formula One season. Alain Prost took his first Formula One victory in this race and the first win for Renault that season.

Heading into France Carlos Reutemann continued to hold a strong lead in the world championship, leading on 37 points. Williams teammate and reigning champion was in second place thirteen points adrift on 24 points whilst Nelson Piquet was third, two points behind Jones. Gilles Villeneuve had brought himself and Ferrari back into the world championship. Villeneuve was now on 21 points whilst Ferrari now sat in third in the constructor's championship, one point behind Brabham yet still 36 points adrift of Williams. The dark horse in the championship fight was Jacques Laffite who had been driving consistently for Ligier in recent races with three podiums in a row. Laffite was fifth on 17 points heading into his home race.

Whilst Laffite had been performing well for Ligier, his teammate Jean-Pierre Jabouille had been significantly underperforming. Jabouille an experienced racer and previous race winner had broken his legs the previous year at the 1980 Canadian Grand Prix. After missing the opening races, Jabouille returned to F1 in 1981 yet remained hindered by his leg injuries and failed to recapture his previous form. With this in mind, Jabouille opted to retire from racing ahead of his home race. However no longer a driver, Jabouille did not walk out on Formula One, remaining at Ligier as one of the team managers. Replacing Jabouille at the team was fellow French driver, Patrick Tambay. Tambay had been competing the season to very little avail for the Theodore team. The opening at Ligier had allowed the somewhat underrated Tambay to return to a more competitive team. Replacing Tambay at Theodore was Marc Surer who had sat out the Spanish race due to his former team Ensign dropping him for the more heavily financed Eliseo Salazar.

Elsewhere at Osella, Giorgio Francia was dropped in the team after only one race. The team had attempted to get Francia, an inexperienced single seat racer a superlicense all season and when the FIA finally provided him with a license, the team dropped him due to his poor form. Osella favouring to only a run a single car that of their lead driver Beppe Gabbiani.

In other news, Goodyear had returned to the sport to re-enter the tyre war. Williams, Brabham and Lotus ran Goodyear rubber in France, the rest of the competitors using either Michelin, Avon or Pirelli tyres.

As usual it was the turbo charged Renault's that reigned supreme on their home turf in France. René Arnoux took a convincing pole position with teammate Alain Prost in third place. Surprisingly splitting the two Renault's was the McLaren of John Watson. McLaren under the new management of Ron Dennis had seen a resurgence in form in recent races, this return to form was further emphasised by Watson's third and teammate Andrea de Cesaris's fifth place start.

Splitting the two McLaren's was Nelson Piquet's Brabham. Piquet appeared fastest of the main championship contenders with his main rivals struggling behind. Jacques Laffite performed well to line up sixth at his and his team's home race whilst Williams appeared to underperform in qualifying. Carlos Reutemann was seventh whilst Alan Jones was in ninth, splitting the Williams cars was Elio de Angelis who continued to perform consistently well for Lotus. Mario Andretti had clawed his way into the top ten in his ill-handling Alfa Romeo.

Ferrari were struggling, it would prove to be difficult for Villeneuve to repeat his previous success in Monaco and Spain from eleventh whilst teammate Didier Pironi was three places behind in fourteenth. Patrick Tambay saw little improvement from his predecessor Jabouille's performances and started from sixteenth for Ligier.

Failing to qualify was Siegfried Stohr's Arrows, Slim Borgudd, Beppe Gabbiani and the two Toleman's. Despite failing to qualify once again, Toleman had made progress. Brian Henton was faster than both Borgudd and Gabbiani, going faster than another competitor for the first time.

Arnoux made a dreadful start from pole position and dropped down to ninth position at the start. Nelson Piquet took the lead, sweeping around the outside of turn one ahead of John Watson, Alain Prost, Andrea de Cesaris and Gilles Villeneuve. Villeneuve climbing all the way from eleventh on the grid. The second lap saw Villeneuve move ahead of De Cesaris's McLaren to take fourth. Prost meanwhile moved ahead of the other McLaren of Watson to take second place.

Alan Jones began to suffer mechanical trouble and pulled into the pits for repairs, his race well and truely ruined. Arnoux had meanwhile began to recover from his poor start and moved into seventh, sitting behind Reutemann's Williams. Reutemann soon overtook both De Cesaris and Villeneuve with Arnoux following him through. Arnoux soon caught up to Reutemann and overtook him before falling back behind the Williams when he began to suffer handling problems. Villeneuve went out on lap 41 with electrical problems ending his potential for another strong result. Likewise both Reutemann and De Cesaris dropped back with mechanical troubles.

Meanwhile at the front, Alain Prost in the leading Renault was suffering from a loose front wing and a lack of fourth gear. Yet despite these problems, the young Frenchman was closing on race leader Piquet. The Brabham and Renault were set for an interesting battle, however on lap 58 torrential rain hit the circuit and the race organisers were forced to stop the race. The cars retook the grid in the order of position on the last lap of the race. After awhile the rain subsided and the cars made ready for the restart.

The second start saw Prost take the lead of the race as Piquet struggled to get away. The Brabham driver dropped to fourth falling behind Watson and Arnoux as well. Despite his gearbox troubles, Prost maintained the lead, however Watson's McLaren was not far behind. Watson made a lunge down Prost's inside at one stage only to overshoot the corner, run wide and lose the lead again. Prost from thereon remained unhindered and took his first race victory in front of his home crowd. Watson was second, once again confirming McLaren's resurgence. Despite finishing fifth on the track, Piquet was third in the race due to his substantial lead before the race was stopped. Arnoux in the second Renault was fourth with Didier Pironi's Ferrari fifth and Elio de Angelis for Lotus in sixth.