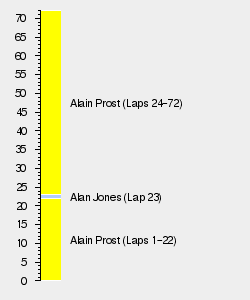 The 1981 Dutch Grand Prix was a Formula One motor race held at Circuit van Zandvoort on 30 August 1981. The race was won by Alain Prost, who led the race for all but 1 of the 72 laps, in his 25th career start.

Heading into Zandvoort, Carlos Reutemann continued to lead the championship on 45 points. However his gap had been seriously reduced, Nelson Piquet was now only six points off his championship lead whilst Jacques Laffite who was now third in the championship following his win in Austria was only a further five points behind Piquet.

The high speed nature of the Zandvoort circuit meant that it was predicted to favour the turbo charged teams, in particular the Renault team with its drivers René Arnoux and Alain Prost. The Renault's were consistently performing as Formula One's quickest team, however poor reliability had kept their drivers and team out of the championship battle.

Tyrrell had been running their new Tyrrell 011 chassis for Eddie Cheever since Germany. Michele Alboreto, the team's second driver, would also upgrade to the new chassis. There was rumours abound at the McLaren team, that former double world champion Niki Lauda, who had suddenly and unexpectedly quit Formula One in 1979 to focus on operating his new airline, was rumoured to have been testing for McLaren in between the Austrian and Dutch rounds. The team's current second driver Andrea de Cesaris was also rumoured to be on his way out, but McLaren had become tired of the quick but erratic driver, who had continuously crashed their cars throughout the season.

The Fittipaldi team made their return to the grid at Zandvoort. The Brazilian team had encountered cash flow problems which prevented them from being able to afford an engine for the Austrian race forcing them to sit the round out. For the Dutch race, the team was able to garner additional sponsorship to return to the grid albeit the team remained financially unstable.

As was expected, the Renault's led the way in qualifying. Alain Prost took pole position ahead of teammate René Arnoux. Nelson Piquet was in third place in his Brabham ahead of the two Williams cars of Alan Jones and Carlos Reutemann. Jacques Laffite took sixth place ahead of Mario Andretti who put in an impressive performance for Alfa Romeo to take seventh. Rounding out the top ten was John Watson, Elio de Angelis and Riccardo Patrese.

The unlucky drivers that failed to qualify were Michele Alboreto, the two Toleman's of Brian Henton and Derek Warwick, Beppe Gabbiani and the two Fittipaldis of Keke Rosberg and Chico Serra. Despite the team's return to the grid, the lack of financial flexibility was hampering the team's performances significantly.

After qualifying, there was a dramatic turn of events in the McLaren camp. After their second driver Andrea de Cesaris crashed his McLaren car during the session, the team refused to rebuild De Cesaris's car despite the driver qualifying thirteenth. The team was tired of De Cesaris continually wrecking their cars throughout the season and refused to let him race following his latest entry. This meant the first of the non-qualifiers, Michele Alboreto was granted entry into the race.

In the warm-up, the Williams cars of Alan Jones and Carlos Reutemann were notably quicker than the Renault's on a race set-up, boding well for the competitiveness of the race.

The first lap turned out to be highly eventful. Alain Prost and René Arnoux maintained a Renault lead whilst behind them, Gilles Villeneuve hoped to make up for his bad start. His Ferrari sprinted up through the midfield however he got sandwiched between Riccardo Patrese and Bruno Giacomelli. Villeneuve clipped Giacomelli's car and spun dramatically down the straight, luckily not hitting any cars before coming to a rest in the gravel ending his race.

A couple of corners later, Mario Andretti hit the rear of Carlos Reutemann's car damaging his front wing whilst at the same time further down the field, Didier Pironi's Ferrari and Patrick Tambay's Ligier collided. Tambay limped back to the pits to retire whilst Pironi continued on for a few laps before he crashed out due to the damage.

In the first few laps Prost began to open up a gap to Arnoux behind him who was beginning to hold up the cars of Jones, Piquet, Laffite and Reutemann behind him. Jones quickly disposed of Arnoux and soon Piquet and Laffite were also past the Renault driver. Arnoux was evidently struggling and by lap 13 he had dropped behind Reutemann and Watson as well.

Prost had opened a substantial lead in the opening laps, however Jones's Williams was quickly baring down on the Renault driver. The two would soon engage in their second great duel of the season, following on from Hockenheim.

A little bit behind the pair, Laffite and Reutemann duelled for fourth position. On lap 18 Reutemann performed a wild move down the inside of Laffite sending both cars into the gravel and out of the race. Eliminating two of the major championship contenders from the race.

A couple of laps later, Arnoux's poor pace was confirmed to be engine trouble as he pulled out of the race when his problem became terminal. As one Renault faulted the other soldiered on in the lead with Prost continuing to hold a marginal lead over Jones behind him. Jones had relentlessly attacked Prost lap after lap but could find no way past. Eventually Jones's tyres began to degrade from his continuous attack and he could no longer keep pace with the Renault.

Lap 62 saw Mario Andretti suffer a spectacular tyre failure that pitched him into the barriers. The American former champion received minor injuries as the marshalls had to assist him getting out of his stricken Alfa Romeo.

Jones began to drop back as Prost was left with a comfortable lead out front. Jones continued to fall back and soon Piquet's Brabham had caught up to the Williams driver where he soon went passed as Jones dropped back down into third position. The order remained the same until the end and Prost took his second Grand Prix victory. Nelson Piquet finished second, the result meant that he was now tied for the lead in the world championship with Reutemann who failed to finish at Zandvoort. Jones took third place whilst round out the minor places a long way behind the leaders was Héctor Rebaque in the second Brabham, Elio de Angelis's Lotus and Eliseo Salazar of Ensign who scored his first points from second last on the grid.