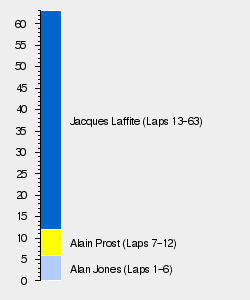 The 1981 Canadian Grand Prix was a Formula One motor race held on 27 September, 1981, at Montreal. Jacques Laffite won the race driving for Ligier. It would prove to be Ligier's last race win for fifteen years, until the 1996 Monaco Grand Prix. Williams clinched the 1981 Constructors' Championship with one race left, as the two points scored by the Brabham team were not sufficient to allow them to catch Williams in the final race. This was also the last time the Canadian Grand Prix was held at the near-end of the season.

The big news heading into Canada was that reigning world champion Alan Jones had announced his retirement from Formula One at the end of the season. Jones like many of the older pre-ground effect era of drivers had developed a dislike of the new ground effect style Formula One car. There was also rumours that 1978 world champion Mario Andretti who had been having a torrid 1981 for Alfa Romeo would be retiring for similar reasons. Jones on the other hand still had a chance of claiming a second championship before his retirement. He sat fourth in the standings, equal on points with Renault's Alain Prost who had been dominating much of the second half of the year. Jacques Laffite also had an outside chance in the championship, three points behind Prost and Jones. The two main contenders were Carlos Reutemann and Nelson Piquet. Reutemann had led the championship for most of the season and currently had a lead of three points over main rival Nelson Piquet.

Whilst two champions in Jones and Andretti were set for their final races, another former champion was rumoured in returning. After much speculation of a relationship between Niki Lauda and McLaren, Lauda had been spotted testing with McLaren at the Donington circuit.

The Montreal circuit was home turf of the feisty Ferrari driver Gilles Villeneuve. Villeneuve's success in Formula One during recent years had boosted Formula One's popularity in Canada significantly. For 1981, there notably would be not just one but two Villeneuve's competing in Montreal. Arrows driver Siegfried Stohr had been significantly effected after hitting his chief mechanic Dave Luckett back in Belgium. The already mentally effected Stohr suffered a huge accident during qualifying at Monza. Realising he no longer was psychologically fit for Formula One, Stohr announced his retirement with immediate effect after Italy. For the North American races, Arrows signed Gilles Villeneuve's brother Jacques Villeneuve, Sr.. The younger Villeneuve had also appeared impressive, having won the 1980 and 1981 Formula Atlantic championships.

In qualifying, Nelson Piquet crucially took pole position ahead of his Williams championship rivals, Carlos Reutemann and Alan Jones. Alain Prost could only manage fourth on the grid, the Renault's seemingly less competitive on the slower circuits. Nigel Mansell put in an excellent performance for Lotus to go fifth fastest ahead of Héctor Rebaque and teammate Elio de Angelis. René Arnoux was eighth with John Watson and Jacques Laffite, a poor qualifying for the final championship contenders.

Gilles Villeneuve could only manage eleventh at his home race, with Ferrari teammate Didier Pironi directly behind him. Gilles' brother Jacques failed to even qualify alongside the two Fittipaldi cars of Keke Rosberg and Chico Serra, the two Toleman car of Brian Henton and Derek Warwick and Beppe Gabbiani's Osella.

Due to torrential rain, the race start was delayed by 90 minutes. In the mean time, FOCA President Bernie Ecclestone frantically rewrote the insurance waivers for the organisers.

When the race finally got underway it was the two Williams cars that made the best start, Alan Jones forced his way down the inside of teammate Carlos Reutemann, banging wheels as Jones took the lead. Reutemann running wide dropped behind Piquet, Prost and De Angelis.

Home talent Gilles Villeneuve was climbing up the field, however in the first lap he tapped Rene Arnoux's Renault into the path of teammate Didier Pironi. Pironi and Arnoux collided, Arnoux was out of the race whilst Pironi sustained damage to his car.

The conditions continued to deteriorate, Riccardo Patrese and Patrick Tambay spun off on lap six whilst a lap later Eliseo Salazar went off. However most significantly on lap eight, race leader Alan Jones spun off the circuit. Jones was able to get going again however Alain Prost took the lead, getting by Piquet who had to take avoiding action to avoid Jones. Behind Prost came Jacques Laffite and Gilles Villeneuve. Laffite was flying in the wet conditions and by lap 13 he had overtaken both Piquet and Prost to take the lead of the race.

John Watson was also climbing the field overtaking the recovering Piquet and Jones. Lap 24 saw first the retirement of Pironi but more significantly Alan Jones who pulled in with handling issues. Jones's retirement ended his slim hopes of retaining his world championship.

Following this Villeneuve also moved ahead of Prost, however the fastest car on track was Watson's McLaren who quickly disposed of both Prost and Villeneuve. Things became much harder for Villeneuve in the final laps, whilst lapping Mario Andretti's Alfa Romeo, Villeneuve clipped the back of Andretti's car, flipping his front wing vertically obscuring his vision. Villeneuve guiding his car based on his peripheral vision and knowledge of the circuit, drove around expecting to be black flagged due to the danger of his car on circuit. Eventually the front wing came off and Villeneuve was able to trundle around the track to take a distant third behind Laffite and Watson. Bruno Giacomelli put in a strong performance for Alfa Romeo to take fourth place. Piquet finished in fifth place, now only one point behind Reutemann in the championship going into the final race. Elio de Angelis took the final point in sixth place.