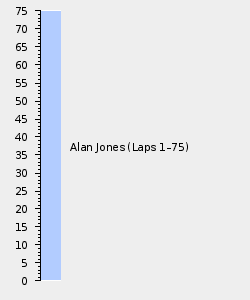 The 1981 Caesars Palace Grand Prix was the final race of the 1981 Formula One season. It was held on October 17, 1981, and it saw Nelson Piquet win the first of his three World Championships.

The race was won by Alan Jones of Williams, with Renault's Alain Prost in second and Alfa Romeo's Bruno Giacomelli in third, achieving Alfa Romeo's only podium finish this season.

After the Watkins Glen circuit went bankrupt following the 1980 event which saw the circuit fail to pay its $800,000 debt to the teams, the circuit was deemed unfit to host a race in 1981. A race circuit was hastily developed to replace it in Las Vegas, Nevada which would be hosted in the car park behind the Caesar's Palace casino. It was deemed an odd venue for a Formula One race which drew much criticism. The climate of Las Vegas was much hotter than the drivers were generally used to, which notably drew criticism as well as the dusty circuit which held little to no grip on the tarmac.

Heading into Las Vegas, reigning world champion Alan Jones was announced to be retiring from Formula One at the end of 1981. Jones had become disillusioned with the sport due to political infighting, which had cost him a victory as Spain earlier in the year, and the contentious relationship he had with teammate Carlos Reutemann. Another factor was the new ground effect cars which many of his colleagues found unpleasurable to drive. Before the race, Jones had quite bluntly announced that Reutemann would receive no help from him in the race, the two having fallen out after Reutemann failed to give way to his team leader way back in Brazil, the second race of the season.

The full entry list for the 1981 Caesars Palace Grand Prix is outlined below:

Practice and qualifying saw many complaints about the circuit from the drivers. The anti-clockwise circuit saw significant strain on the driver's necks as well as many drivers suffering from heat stroke in the baking hot conditions of Las Vegas. Championship challenger Nelson Piquet in particular was struggling, his back was badly bruised after practice which saw him miss most of qualifying. His main rival Carlos Reutemann had meanwhile taken pole position and looked in prime position for the world championship. Piquet still managed to put his car fourth on the grid, but his competitiveness was looking grim. Jacques Laffite had the worst qualifying putting him well down in twelfth position.

Alan Jones in the sister Williams lined up on the front row for his last race in second, next to teammate and arch-nemesis Reutemann. Gilles Villeneuve who ever impressed in his Ferrari was third ahead of Piquet, Alain Prost and John Watson. Patrick Tambay was seventh, the second Ligier driver to Laffite had impressed unlike his teammate. Ligier had nonetheless announced they were dropping him at the end of the season although Tambay like Jones and Andretti was heading from Formula One retirement.

Bruno Giacomelli was eighth in his Alfa Romeo with Nigel Mansell ninth and Mario Andretti in tenth. Those drivers that failed to qualify were Slim Borgudd, Chico Serra, Derek Daly, Jacques Villeneuve, Sr., Brian Henton and Beppe Gabbiani. Derek Warwick finally qualified to race for the first time after failing to make the cut in his Toleman for half a season. The young Brit lined up twenty second on the grid.

The full qualifying results for the 1981 Caesars Palace Grand Prix are outlined below:

The start of the race saw Alan Jones take the lead as championship leader Carlos Reutemann struggled to get away and dropped to fifth behind Gilles Villeneuve, Alain Prost and Bruno Giacomelli. Nelson Piquet had also made a poor start dropping by John Watson and Jacques Laffite who had made a remarkable start from twelfth on the grid. Reutemann appeared to be struggling as by lap three he had dropped behind Watson and Laffite and was now only just ahead of main rival Piquet.

Patrick Tambay had a sizeable accident on lap two, his Ligier hitting the barriers hard. Tambay was left hopping out of the car with an injured left ankle. The third lap saw Prost overtake Villeneuve who had begun to hold up the cars behind him in his poorly handling Ferrari. Only four seconds separated Villeneuve, Giacomelli, Watson, Laffite, Reutemann, Piquet and Andretti. Laffite soon moved ahead of Watson whilst on lap 17 before soon moving to third after passing Giacomelli. Piquet crucially moved ahead of Reutemann to move into seventh.

Piquet then charged by Watson to take sixth and move into the points, the position then became fifth on lap 22 when Villeneuve pulled out with engine problems. Mario Andretti had overtaken Reutemann shortly after Piquet and soon charged by the Brazilian championship contender himself. The two Alfa Romeo's of Giacomelli and Andretti battled together until Giacomelli spun dropping down to tenth position.

Reutemann who could see his championship hopes slipping away, provided a hopeful comeback for his fans when he overtook Watson's McLaren to move into the points in sixth. Andretti's fine drive on what many believed to be his last before his retirement pulled off on lap 29 with suspension issues.

Jones continued to dominate the race out front with Prost in a comfortable second. The Renault driver began to suffer tyre degradation which forced the Frenchman into the pits for new tyres. This put Laffite in second, Piquet in third and Reutemann fourth. It all began to fall apart for Reutemann as first Nigel Mansell's Lotus overtook him and he then fell behind the recovering Prost and Giacomelli.

Piquet who seemed set for the championship honours was not performing well either and dropped behind Prost and Giacomelli as well. Laffite was forced to stop for tyres dropping down to sixth. Mansell in the closing laps overtook the struggling Piquet who despite his issues remained crucially ahead of Reutemann who remained in seventh.

Alan Jones was meanwhile dominating his final Formula One race before his retirement, taking victory by 20 seconds. Prost and Giacomelli took a well deserved second and third. Giacomelli getting his first Formula One podium after a torrid 1981 campaign for Alfa Romeo. Nigel Mansell took a hard earned fourth whilst crucially Nelson Piquet was fifth to take his first Formula One championship. Piquet's struggles in the race was down to physical fatigue, he had vomited in the cockpit and could barely walk following his exit from the car. Laffite took sixth position whilst Reutemann was seventh, the Argentine seemed to have the championship in the bag but inexplicably had lost his form when he needed it the most.

The full results for the 1981 Caesars Palace Grand Prix are outlined below:

Retrieved from "https://f1.fandom.com/wiki/1981_Caesars_Palace_Grand_Prix?oldid=88643"
Community content is available under CC-BY-SA unless otherwise noted.