Formula 1 Wiki
Register
Don't have an account?
Sign In
Advertisement
in: 1981 Grands Prix, British Grand Prix, Formula One races in the United Kingdom 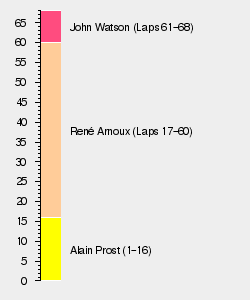 The 1981 British Grand Prix was the ninth round of the 1981 Formula One season. The race was won by John Watson who took his first win since the 1976 Austrian Grand Prix. His team McLaren also returned to winning ways having not won since 1977.

In Britain, Osella returned to running two cars for the event after only running a sole car of Beppe Gabbiani in France. The team had hired Formula One veteran Jean-Pierre Jarier who had largely been out of work in 1981 with the exception of participating in the opening two rounds for Ligier.

Lotus had announced that it was to reenter its Lotus 88 chassis for Britain, updating it to a configuration that would be hoped to be accepted by the FISA unlike the team's previous entry attempts with the chassis. Whilst Colin Chapman's team was optimistic, there was much doubt within the paddock that the FISA would accept the Lotus 88 entrant.

The full entry list for the 1981 British Grand Prix is outlined below:

During practice, Nelson Piquet and Brabham ran their Brabham BT50 chassis for the first time, notably powered by a turbo engine supplied by BMW. The team would not run the BT50 in 1981, the new car was announced to be making its debut in the next season in 1982.

Lotus ran their Lotus 88 chassis in practice with seemingly little resistance, the race organisers at Silverstone the Royal Automobile Club feeling that the 88 chassis was perfectly legal. When FISA President Jean-Marie Balestre heard of this, he immediately began to angrily demand that the Lotus 88 chassis be withdrawn from the event. Therefore beginning the controversy surrounding the car once again.

The Renault cars continued their competitive form from France, René Arnoux was in pole position with Alain Prost alongside him. Nelson Piquet lined up in fourth place, whilst Didier Pironi had found his form again to start from fourth place. Behind Pironi came John Watson and Andrea de Cesaris, the McLaren's continuing their resurgence in pace.

Williams were underperforming in qaulifying, Alan Jones could only manage seventh whilst Carlos Reutemann was in ninth. Splitting the two Williams cars was Gilles Villeneuve's Ferrari. Riccardo Patrese occupied the final place in the top ten for Arrows.

Lotus had responded to the demand from the FISA to withdraw their 88 chassis by cannabalising the Lotus 87 into a form similar to the 88 overnight. The result was not a success and Lotus were not competitive. Nigel Mansell failed to qualify for his home race whilst Elio de Angelis could only manage twenty second on the grid.

Pole sitter René Arnoux made a poor getaway and dropped to fourth behind Renault teammate Alain Prost and the two Ferrari's of Didier Pironi and Gilles Villeneuve. Villeneuve having made another phenomenal start from eighth on the grid. However the Renault was far superior and Arnoux moved past the Ferrari's by lap three and began to chase after teammate Prost.

Villeneuve's strong start was all for naught when at the end of lap three he spun at Woodcote corner. The Ferrari spun right into the path of the Williams of Alan Jones causing Jones to slam into Villeneuve whilst Andrea de Cesaris's McLaren spun off the circuit and into the catchfencing whilst taking avoiding action of the pair. Jones and De Cesaris were out on the spot whilst Ferrari attempted to limp his battered Ferrari around the circuit for half a lap before pulling off and retiring.

With Villeneuve's Ferrari out, Nelson Piquet was now in fourth and began to pressure the sole Ferrari of Pironi ahead of him. On lap five, Piquet's Brabham took third where he began to settle comfortably into the position, however remained significantly behind the Renault's of Prost and Arnoux who were dominating out front.

On lap eleven Piquet's tyre blew spectacularly, sending him into the barriers at high speed. Piquet received minor injuries to his ankle and was required to be lifted out of the car by the marshalls.

John Watson who had had a slow start to the race was beginning to make a comeback in his McLaren. After overtaking both Carlos Reutemann and Mario Andretti, Watson moved into fourth and began to challenge Didier Pironi for third. On lap 13 Pironi suffered an engine failure leaving Watson in third place, some distance behind the Renault's.

Prost and Arnoux were comfortably leading out front, however it was not to be two consecutive wins for Prost, his turbo Renault engine breaking down on lap 17 leaving Arnoux to inherit the lead of the race.

Elio de Angelis was disqualified on lap 25 for ignoring yellow flags, Lotus manager Colin Chapman was furious, believing it to be a deliberate slight against him from the FISA surrounding the controversy of the Lotus 88.

Reutemann moved past Andretti whilst behind the Alfa Romeo came Riccardo Patrese's Arrows and Héctor Rebaque's Brabham. Rebaque dropped back when he had to stop for tyres, leaving Jacques Laffite in the Ligier in sixth place.

There would be a number of retirements in the top six however, first to go out was Mario Andretti's Alfa Romeo on lap 59. Five laps later Riccardo Patrese was also out, however more significantly René Arnoux who had been dominating the race fell like Prost to Renault's poor reliability record, retiring with engine problems.

This left John Watson in the lead where he would go on to win with Carlos Reutemann and Jacques Laffite a long way behind him in the final podium places. Eddie Cheever took fourth, a strong drive for the young Tyrrell driver who started twenty third on the grid. Rebaque claimed two points for Brabham whilst Slim Borgudd surprisingly took the final points position. After failing to qualify for the past four events, Borgudd took some much needed points for his ATS team who took their first points of the season.

John Watson took a highly popular home win at Silverstone, the first for a British driver to do so on home turf since James Hunt in 1976. Watson also finally got his second win, five years after his last at the 1976 Austrian Grand Prix. The race also confirmed McLaren's return as a front winning team taking their first win since the 1977 Japanese Grand Prix and their first win under the Ron Dennis era of the team.