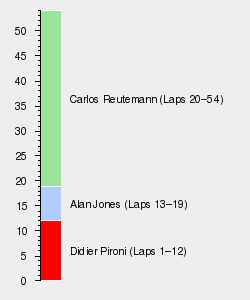 The 1981 Belgian Grand Prix was the fifth race of the 1981 Formula One Season. The race was marred by tragedy by the death of Osella mechanic Giovanni Amadeo when he stumbled onto the race track and was hit by Carlos Reutemann during practice. Furthermore, Arrows mechanic Dave Luckett was injured whilst trying to restart Riccardo Patrese's car on the startline when he was hit by the second Arrows of Siegfried Stohr.

Heading into the race, Carlos Reutemann continued to lead the drivers' championship on 25 points. Nelson Piquet who had won the previous two races was now significantly closer to Reutemann in the championship, only three points behind. The other Williams of Alan Jones was third on 18 points, dropping back a bit in the standings after failing to score in Imola. The Constructors championship saw Williams hold a considerable 18 point lead over Brabham in second place in the championship.

Heading into Zolder, the Formula One grid had expanded to 32 cars, the grid had become completely unsustainable for the small and clustered Zolder pit-lane. As a result, the FISA had put pressure on the smaller teams to boycott the race. Despite the FISA's plea's only ATS responded by withdrawing Jan Lammers from the event. Nonetheless the team still ran its second car for Slim Borgudd and none of the other minor teams had agreed to boycott the event.

Lotus returned to the grid after missing the race in Imola to work on their new Lotus 87 chassis, the successor to the illegally declared Lotus 88.

During the Friday practice session, tragedy was to strike the Formula One fraternity. The predicted fears of having an overcrowded pit-lane in the small and narrow Zolder pitlane were realised when Osella mechanic Giovanni Amadeo stumbled onto the circuit after being forced off the pit wall due to the overcrowding. Amadeo stumbled right into the path of the oncoming Williams of Carlos Reutemann. Amadeo was hit by Reutemann where he sustained a fractured skull. The incident was a major shock to the Formula One community as Amadeo was rushed to hospital in a very grave state. Almost immediately, the mechanics began to complain to the race organisers about the overcrowding of the Zolder pitlane. The teams complained that the pitlane was crowded with too many people that did not need to be there such as fans and other race observers. The team mechanics pleaded to the Zolder officials to only allow team personnel or race officials into the pitlane to prevent the overcrowding.

Despite the mayhem in the pits, qualifying continued and despite the earlier trauma of hitting Amadeo, Reutemann rallied to take pole position for Williams. Championship rival Nelson Piquet lined up alongside him with Didier Pironi in the ever improving Ferrari in third. Riccardo Patrese had done well for Arrows to start from fourth whilst John Watson, Alan Jones, Gilles Villeneuve, Eddie Cheever, Jacques Laffite and Nigel Mansell, in the new Lotus 87 completed the top ten.

Failing to qualify were the two March cars and two Toleman's as well as Slim Borgudd's ATS. However the big name to fail to qualify was René Arnoux, whilst the Renault car was unsuited to the Zolder track it was a surprise to see Arnoux perform so poorly in comparison to teammate Alain Prost who started from twelfth.

On the Sunday morning of the race, the aggrieved mechanics of the Formula One grid who had seen one of their fellow mechanics seriously injured due to the overcrowding of the Zolder pits stage a protest on the morning of the race in anger of the Zolder officials failing to make any changes to allowing any unnecessary persons into the pitlane. The cars lined up on the grid but remained unattended by any of the mechanics, in sympathy a number of drivers and team managers joined the mechanics in their stand of protest.

Much to the annoyance of the Zolder officials, the race was successfully delayed and eventually the mechanics returned to their cars to begin preparing them for their race. However, the because the cars were in various states of readiness to start, the warm-up lap was haphazard and disorganized, as some cars cars pulled away while others were still vacant and unattended. This required in some cars to awkwardly maneuver around others to take their positions on the starting grid. There was further shambles moments later when Nelson Piquet failed to take the correct grid spot and as a result had to do a further lap of the circuit in order to get back into the correct grid position. As the rest of the cars sat stationary on the grid, some began to overheat and thus switched off their engines. Once Piquet finally returned to the grid, the cars switched their engines back on to start the race. However several cars failed to re-start, including Eddie Cheever, who waved to his team for assistance. The Tyrrell mechanics hastily clambered over the wall and bump-started the car, pulling it back into its grid position in the nick of time. Further up the grid, Riccardo Patrese's engine had also stalled. Just like Cheever, Patrese began to frantically wave to indicate he was in distress. In a desperate attempt to start Patrese's engine before the start of the race, Arrows chief mechanic Dave Luckett jumped over the pitwall and began to manually restart Patrese's engine from the rear of the car. Despite Patrese's dilemma, and Luckett's presence on the track, the race officials started the lights procedure anyway, with the driver and mechanic now immovable hazards on the grid.

Luckett failed to start Patrese's engine in time for the start of the race and whilst Jones, Cheever and Mansell were able to successfully navigate themselves around Patrese, the second Arrows car of Siegfried Stohr arrived unsighted into the path of Patrese and Luckett. Stohr attempted to stop, but was already going too fast to avoid a collision. Stohr's Arrows slammed into the back of Patrese's car and hit Luckett whose body was flung several metres. A horrified Stohr jumped from his car, anguish evident in his body language before race officials led him to safety.

The pit straight was now partially blocked with ambulances and safety vehicles as medical personnel attended to Luckett and marshals cleared away Patrese and Stohr's wrecked Arrows cars. However, rather than throw the red flag to stop the race, the marshals displayed waved yellow flags and frantically waved at the cars to slow down as they passed by the crash scene at nearly full speed. The drivers, confused by the marshals' signals, waved back at the marshals to get off the track, while continuing to race. Several drivers passed dangerously close to the crash scene, as Marc Surer took his Ensign onto the grass to avoid the safety vehicles and Chico Serra narrowly avoided hitting a marshal in his Fittipaldi. On the next lap, the drivers stopped on the pit straight on their own accord, without being commanded to do so by race officials. In the confusion, Piquet completed an extra lap, eventually stopping behind the rest of the field.

The race was stopped and Luckett was rushed to hospital, after laying on the track for at least a lap. Despite suffering serious leg injuries, a broken arm, ribcage and the loss of the tip of his little finger on his right hand, Luckett would go on to make a full recovery.

Despite the grim mood surrounding the paddock, the race was to restart once again. Didier Pironi got the best start to take the lead in his Ferrari as Reutemann, Piquet, Watson and Jones followed on behind him. Jones was proving to be the fastest car on track and overtook Watson's McLaren only to be held up by the slower Piquet. Piquet proved difficult to pass and despite the efforts of the relentless Jones, the Williams driver could find no way past.

Frustration eventually got the better of Jones and the Australian performed an ill fated move down the inside of Piquet's Brabham. The two cars touched and Piquet was sent wide off the circuit and into the barriers and retirement. A furious Piquet stormed back to the pits, notably shouting to Williams team manager Frank Williams that he wished to break both of Jones's legs.

Jones now released from Piquet quickly overtook Reutemann and then Pironi in the following laps. Pironi would lose second position when he spun off the circuit and dropped well out of contention for the race. With the elimination of the Williams cars main rivals, Jones and Reutemann held a comfortable 1-2 for the team. It was not to last, on lap 19 Jones missed a gear went wide and crashed into the barriers. Jones limped from his car, his left leg scalded from an exploding radiator in the accident.

This left Reutemann in the lead ahead of Jacques Laffite's Ligier and Nigel Mansell, performing well in the new Lotus 87 chassis. John Watson was fourth, however he then began to drop back with gearbox issues. This meant that Gilles Villeneuve took the position in his Ferrari with Elio de Angelis and Eddie Cheever rounding out the final points placings.

Heavy rain then afflicted the circuit, in response the Zolder officials had felt that this was enough and not wanting to provide any further risks on an already traumatic weekend brought the race to an end on lap 54. Reutemann took a convincing win and further consolidation to his championship lead whilst Laffite provided a much needed strong result for Ligier and Nigel Mansell took his first Formula One points and podium in the same race.

Whilst the paddock was relieved to hear that whilst Dave Luckett's injuries were serious they were not life threatening, Giovanni Amadeo, who was injured in Friday practice was not so fortunate. The Osella mechanic succumbed to his head injuries the Monday after the race.