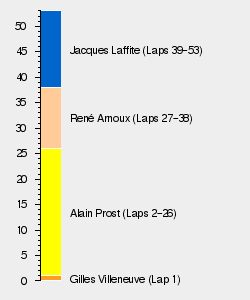 The 1981 Austrian Grand Prix was a Formula One motor race held at Österreichring on 16 August 1981. Jacques Laffite took his first win of the 1981 Formula One season.

Heading into Austria, the championship battle had tightened significantly. The championship leader Carlos Reutemann had failed to finish in Germany whilst Hockenheim race winner, Nelson Piquet had closed to within eight points of Reutemann's 43 point lead in the championship. Jacques Laffite had been the most consistent driver in recent races, continuously finishing on the podium. Although his Ligier had proved not to be the fastest it was certainly the most reliable and his consistency meant he was now third in the world championship on 25 points, one point ahead of reigning champion Alan Jones.

The Österreichring was once again expected to favour the turbo cars with its high altitude and long straights. The Renault team with its drivers' René Arnoux and Alain Prost were considered the fastest team in Formula One, albeit certainly not the most reliable and were expected to be the pacemakers in Austria. One team that notably would not be competing in Austria was that of the Brazilian Fittipaldi team ran by former world champion Emerson Fittipaldi and his brother and former racer Wilson Fittipaldi. The Fittipaldi team was strapped for cash and had notably been struggling in recent races. The team elected to miss the Austrian round as it could not afford to run the Ford-Cosworth DFV power unit that was being supplied to them. This meant that their drivers Keke Rosberg and Chico Serra would have to sit the weekend out.

As was expected the Renault's held a stranglehold over qualifying. Arnoux took a convincing pole with teammate Prost in tow not far behind. Gilles Villeneuve was in third place ahead of Jacques Laffite who had seen an improvement in qualifying performance for Ligier. The two Williams cars of Carlos Reutemann and Alan Jones were next on the grid ahead of Nelson Piquet, Didier Pironi, Elio de Angelis and Riccardo Patrese.

Of those failing to qualify were surprisingly Eddie Cheever, who was unhappy with the handling of the new Tyrrell 011, the two Toleman's of Brian Henton and Derek Warwick as well as Beppe Gabbiani's Osella.

The start saw the two Ferrari's make the best start. Gilles Villeneuve took the lead from third on the grid whilst teammate Didier Pironi leapt up to fourth from eighth on the grid. Villeneuve's Ferrari lead was however short lived as he went off the circuit on lap two dropping down to sixth. The same lap saw Carlos Reutemann also go off and drop down the order.

This left the Renault's back in control of the race as Arnoux and Prost began pulling off into the distance ahead of Pironi's Ferrari now in third. Pironi could not keep pace with the Renault's and soon Piquet, Laffite, Jones and Reutemann were snapping at the Ferrari's heals. Pironi's turbo engine had the advantage on the long straights, but in the corners his rivals continued to snap at his heels.

After being held up by Pironi for nine laps, Laffite finally managed to overtake the Ferrari and began chasing after the Renault's 20 seconds ahead. Piquet and the two Williams cars of Jones and Reutemann had soon also managed to pass the Ferrari. Further disappointment for Ferrari came when Villeneuve crashed out of the race on lap eleven.

Laffite slowly began to close in on Arnoux and Prost, however the Renault's continued to control the pace out front. Lap 26 however saw Prost retire with suspension failure, the first dent in Renault's race. By mid-distance race leader René Arnoux had encountered the backmarkers and was beginning to be held up as Laffite's Ligier began to close in.

On lap 39, Arnoux went to overtake a group of backmarkers around the outside, however he ran wide off the circuit and in doing so conceded the lead of the race to Laffite. From thereon Laffite had control of the race, Arnoux was seemingly unwilling to push him being more interested in gaining some much needed points for Renault rather than risk blowing his turbo in the hope of winning the race.

Piquet came home third ahead of the two Williams cars of Jones and Reutemann as well as John Watson's McLaren. Laffite finally took his first win of the season and was now within eleven points of championship leader Carlos Reutemann. Reutemann once again had lost out to his competitors claiming only two points in the race. Nelson Piquet who was second in the championship continued to creep closer, now only six points off Reutemann.