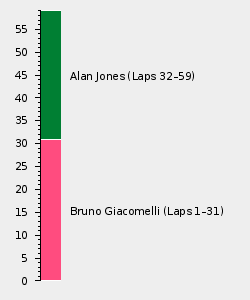 The 1980 United States Grand Prix was the 14th and final round of the 1980 world championship. Alan Jones took the win ahead of Carlos Reutemann and Didier Pironi.

With Alan Jones being crowned the world champion in Canada, and his team Williams being crowned constructor's champion some races before, the title chase was closed before the final race at Watkins Glen began. The entry list was much the same, however after Jean-Pierre Jabouille had suffered serious leg injuries in Canada, Renault opted to run only a single car. CART driver Kevin Cogan had signed for the RAM entered Williams for the US, however after his failure to qualify in Canada, Cogan had given up on the team. Instead the team replaced him with out of work F1 driver, Geoff Lees.

The full entry list for the 1980 United States Grand Prix is outlined below:

The big surprise of qualifying was when Bruno Giacomelli dominated both the Friday and Saturday qualifying sessions to take Alfa Romeo's first pole since 1951. Nelson Piquet was second with Carlos Reutemann third whilst Elio de Angelis had done well to claim fourth for Lotus. The new world champion Alan Jones was in fifth position.

Alain Prost had a nasty accident in qualifying when his suspension failed for the second week in a row. Prost suffered a nasty bang on the head and would not start the race.

The full qualifying results for the 1980 United States Grand Prix are outlined below:

Following his accident in qualifying, Alain Prost elected not to start the race due to head pains. His entry was taken by the fastest of the non-qualifiers, the Ensign of Jan Lammers.

Alan Jones got a terrific start, climbing to second from fifth, however he outbraked himself going into the first corner and went wide and off the circuit where he dropped right down to the back of the grid. At the same time Andrea de Cesaris and René Arnoux also went wide and dropped down to the back of the pack as well. Bruno Giacomelli maintained his lead ahead of Nelson Piquet, Carlos Reutemann and Didier Pironi.

De Cesaris became the first retirement when he spun out of the race on the second lap. The following lap Derek Daly suffered a suspension failure and was pitched off the circuit, Daly suffering one final accident before the end of the season. Jones who had went off the start was making a terrific comeback, climbing right through the midfield.

Up the front Giacomelli began to extend his lead whilst behind him, Reutemann began to pressure Piquet. Piquet however blocked Reutemann's every move, the Argentine waving furiously at Piquet after being stuck behind the Brabham for a number of laps. This battle had allowed Pironi and Jones to climb up to the back of squabbling duo of Piquet and Reutemann. Eventually the pressure had become too much for Piquet and he spun off going into the first corner and was caught in the catchfencing. Piquet signalled the marshalls to give him a push-start and whilst he got the car going again, he was a lap down and simply trundled back to the pits and retired.

A couple of laps later, Jones had managed to take third place from Pironi. Jones then managed to catch up to the rear of teammate Reutemann and after a few laps, Jones was past Reutemann and into second. However Reutemann remained on Jones's tail and the two Williams cars continued to dice for second position.

Giacomelli had control of the race, his Alfa Romeo 11 seconds ahead of Jones, however on lap 32 his car ground to a halt. The electrics on his Alfa had failed, denying Giacomelli a potential first Formula One win. It was then left for Jones to take a comfortable win ahead of Reutemann, Pironi, Elio de Angelis, Jacques Laffite and Mario Andretti, scoring at his home race.

For the second consecutive year, the attendance at the race was disappointing. Unbeknownst to most, the track had been teetering on the brink of bankruptcy for some time, and this weekend tipped it over. The circuit management defaulted on the prize monies due for the race, and told the FIA that there was no timetable to raise the money. 20 years of the race in upstate New York were over. After the track was late in paying prize money for the 1981 Six Hours of Watkins Glen sports car race, it filed for bankruptcy in US Federal Court, listing debts of close to $2,000,000. About $800,000 of that was owed to the FIA for the 1980 Grand Prix. The FIA then voted to suspend the track license indefinitely, and remove the track from the calendar. The track was shut down, and preparations were made for an auction of the assets.

In 1983, the track and all assets were purchased by Owens Corning (now known as Corning International), a maker of glass, fiberglass, pyrex and related products. As the largest single employer in the region, they felt that they were giving back to the community by giving the track a new lease on life. The track was refurbished, and the grand re-opening was held in 1984 with Camel Continental I, a non-FIA replacement to the six hours event. But things really turned around with the addition of a NASCAR date in 1986, and for the first time in several years the track was profitable. Sometime later the management very quietly started discussions with the FIA, and over time all monies owed to creditors were paid back, with interest. In response, an FIA delegate inspected the track, and gave the management a lengthy list of improvements needed for something like Formula One. The management decided that Formula One was not in the foreseeable future for the track.

The full results for the 1980 United States Grand Prix are outlined below:


Retrieved from "https://f1.fandom.com/wiki/1980_United_States_Grand_Prix?oldid=86980"
Community content is available under CC-BY-SA unless otherwise noted.