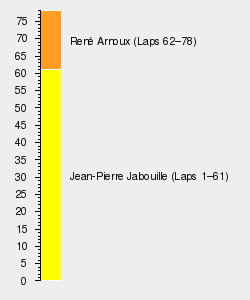 The 1980 South African Grand Prix was the third race of the 1980 Formula One Season. René Arnoux took his second victory in a row ahead of the two Ligier cars of Jacques Laffite and Didier Pironi.

Heading into the South African event, it was announced that Stefan Johansson, the young Swede who had competed in the South American events for Shadow would not continue to drive for the team. Johansson feeling still too inexperienced for Formula One, focusing on his Formula Three prospects for 1980.

ATS also announced that it would only compete with a single car for the remainder of the season, meaning Jan Lammers was dropped from the team. Marc Surer to be their only driver.

The high altitude of the Kyalami circuit, was once again expected to benefit the Renault team and their turbo charged engines.

The full entry list for the 1980 South African Grand Prix is outlined below:

As was expected, the Renault cars led the pace throughout qualifying. Jean-Pierre Jabouille took the pole position ahead of teammate René Arnoux. Nelson Piquet did well to put his Brabham into fourth position ahead of the two Ligier cars of Jacques Laffite and Didier Pironi.

The qualifying session was marred by two serious accidents, firstly Alain Prost in the McLaren suffered a suspension failure, crashing heavily into the wall and breaking his wrist. Then even more seriously, Marc Surer in the ATS had a head-on collison with the barriers at Crowthorne corner. Surer, sustaining serious injuries to both his legs had to be cut out of the car by the marshalls before being taken to hospital. With Surer in no state to race, the team entered Jan Lammers, in an older chassis for the remainder of the event. Lammers was still serving in a reserve capacity, despite being made redundant following the team's decision to race only one car in 1980. He however failed to qualify for the event.

As the cars left the grid, René Arnoux got the better start of the two Renault cars, however moving into the first corner he slowed to allow teammate and number one driver Jean-Pierre Jabouille to take the lead of the race. Arnoux slotted in behind Jabouille ahead of Alan Jones, who had made a terrific start from eighth on the grid, Jacques Laffite, Carlos Reutemann, Nelson Piquet and Gilles Villeneuve.

Reigning world champion, Jody Scheckter made good progress in the opening laps. Overtaking teammate Villeneuve and Nelson Piquet's Brabham.  The two Renault's immediately sped off into the distance as Jones in third position began to be put under pressure by Laffite's Ligier. On lap eight, Jones was forced to concede eighth place to the faster French driver.

After running well in sixth place and challenging Reutemann's Williams ahead of him, Scheckter was forced to retire on lap fourteen due to engine failure. Around the same time, his Ferrari teammate Gilles Villeneuve was forced to pit for new tyres, the Canadian suffering from severe degradation.

Didier Pironi who had made a poor start, had a strong late race resurgence overtaking both Piquet and Reutemann to move into fourth place. Reutemann began to slip back, falling behind Piquet as well as the Tyrrell of Jean-Pierre Jarier.

Up front an exciting battle between Jones and Pironi occured for fourth place, the two driver's swapping positions constantly, both driver's seeking to hold the place. The battle was brought to a premature end when Jones retired on lap 34 with gearbox issues.

In the final laps, Jochen Mass in the Arrows was able to overtake Jarier's Tyrrell to  take the final points position. Arnoux took the race win ahead of the two Ligier cars of Laffite and Pironi. Piquet took fourth place ahead of Reutemann and Mass.